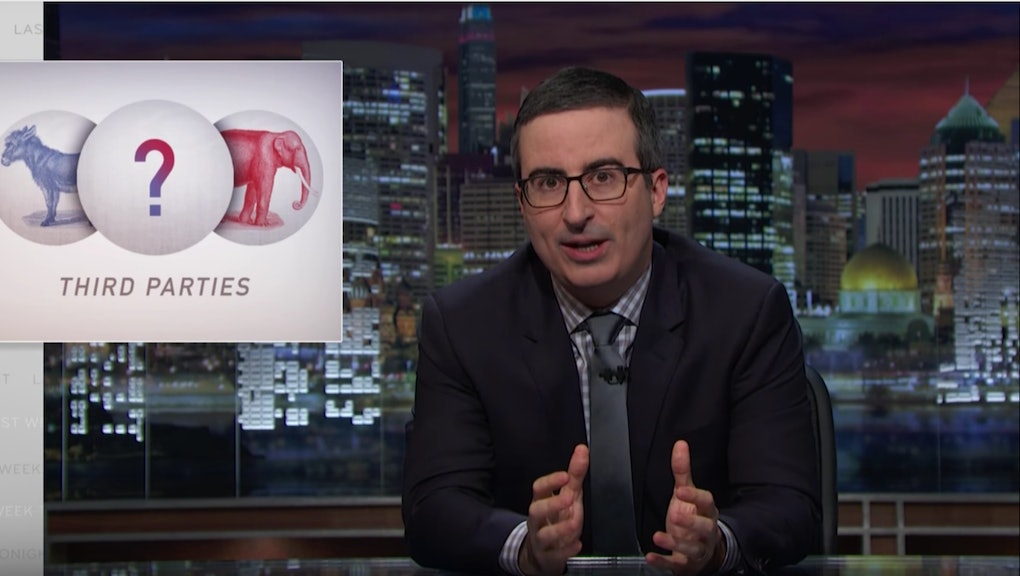 Last Week Tonight host John Oliver provided on Sunday yet another breakdown of the 2016 election, or as the host puts it the segment, "Lice on rats on a horse corpse on fire, 2016." But instead of focusing once again on Donald Trump or Hillary Clinton, Oliver turned his attention to this year's biggest third-party candidates: Green Party candidate Jill Stein and Libertarian Gary Johnson.

Oliver points to a September poll finding that nearly one-third of prospective voters ages 18-29 would consider voting for a third-party candidate, meaning that Stein and Johnson should be vetted properly since they could sway the election. But once you get past the surface of their policies, he says, there's not much to like.

Oliver starts with Stein, whose biggest appeal is her ambition to cancel student debt. She claims she can do this through quantitative easing, which essentially, she says she'll be able to use to free up money from the Federal Reserve as Commander in Chief.

"That is absolutely wrong," Oliver explains. "The president does not have that authority, only the Federal Reserve does — and it does not take marching orders from the White House because that would be extremely dangerous. You don't want to give presidents the power to just create new money whenever they want it."

Basically, Stein's qualifications as president are about as viable as her career as a musician, as he shares a clip and lyrics from Stein's real folk-rock band, Somebody's Sister.

Oliver then turned his attention to Johnson, who is polling the highest among third-party candidates, much to the host's astonishment after gaffes like not knowing what Aleppo is and failing to name a world leader he admires. But even more indicting, Oliver says: Johnson is a "mountain molester."

Ultimately, Oliver notes that this year's election isn't the case of voting for the lesser of two evils with Trump and Clinton — it's the lesser of four evils with Stein and Johnson thrown in the mix. Oliver concludes:

Everyone has to own the floors of whoever you vote for. Whether they are a lying, handsy, narcissistic sociopath; a hawkish, Wall Street-friendly embodiment of everything some people can't stand about politics; an ill-tempered mountain molester with a radical, dangerous tax plan that even he can't defend; or a conspiracy-pandering political neophyte with no clear understanding of how government operates.

Watch Oliver's segment on Stein and Johnson below.