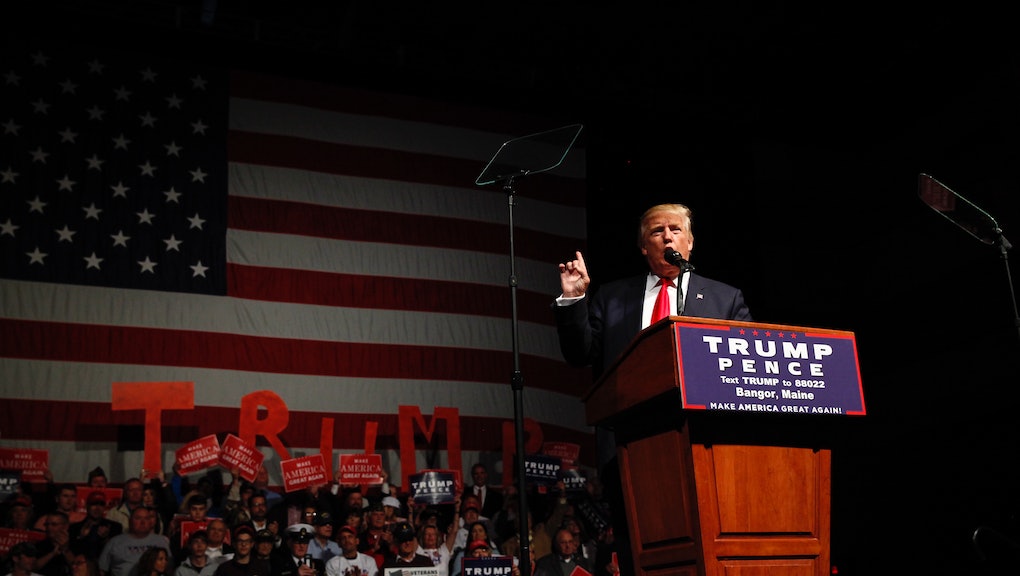 With his poll numbers trending downward and the general election just 21 days away, it seems absurd and irresponsible — if not outright dangerous — for Donald Trump to keep claiming the election is "rigged" against him and will be overrun with voter fraud to ensure that he loses.

But it's important to keep these allegations in perspective. It's easy to view Trump as an aberration from how Republicans usually conduct themselves on the national stage, but in reality, the GOP has made it standard practice to pretend fraudulent voting is widespread and part of a massive left-wing conspiracy to keep their candidates out of office.

Trump is just continuing the tradition.

"The election is absolutely being rigged by the dishonest and distorted media pushing Crooked Hillary, but also at many polling places — sad," Trump tweeted Sunday.

At a rally in Greensboro, North Carolina, on Friday, the Republican nominee made a similar accusation.

"It's one big fix," he said, according to the Boston Globe. "This whole election is being rigged."

A Politico/Morning Consult poll found that 73% of Republicans now believe the election could be "stolen" from Trump on Nov. 8.

There is no evidence to support any of these claims. Voter fraud is almost nonexistent in the United States. Study after study has attested to its extreme rarity, including one from the University of Wisconsin-Madison, that found absolutely "no evidence of fraudulent vote casting or vote buying" in the 2012 election.

"By any measure, voter fraud is extraordinarily rare," reads a separate 2007 report from the Brennan Center for Justice at the New York University School of Law. "Much evidence that purports to reveal voter fraud can be traced to causes far more logical than fraud by voters" — such as clerical errors in poll books and registration records.

Yet there was Rudy Giuliani, the former Republican mayor of New York City and a Trump surrogate, railing against alleged voter fraud to CNN's Jake Tapper on Sunday.

"You want me to tell you the election in Philadelphia and Chicago is going to be fair? I would have to be a moron to say that," Giuliani said to Tapper. "I found very few situations where Republicans cheat. They don't control the inner cities the way Democrats do."

The racial subtext here is unavoidable. But while Giuliani frames voter fraud as a distinctly "inner city" (read: black) phenomenon, the Republican party has supplemented this rhetoric by attacking black, Hispanic and Native American voting rights more directly over the last few years.

In 2013, the U.S. Supreme Court ruled that nine states, mostly in the former Jim Crow South, no longer had to get federal approval before they changed their voting laws — a dramatic erosion of the 1965 Voting Rights Act. Republican lawmakers responded almost immediately by writing and passing laws that negatively impacted racial minorities' ability to vote, including more stringent voter ID requirements and curtailing early voting and same-day registration.

Since 2012 and continuing after the ruling, 14 states have passed laws like this, according to the Brennan Center. Some of those laws, which were enacted in North Carolina, North Dakota and elsewhere, have since been struck down because they were determined to be racist, and therefore unconstitutional.

But the takeaway is clear: If anyone should be worried about their votes not being counted properly, it's people of color — not Trump voters, who are overwhelmingly white, or supporters of a GOP establishment that for years has fought aggressively to prevent minorities from voting.

Nevertheless, the right-wing hysteria continues unabated — fueled by Trump's calls for his supporters to get out and "watch your polling booths" on Election Day for fraud.

"I'm going to go, for sure," Steve Webb, a 61-year-old carpenter from Fairfield, Ohio, told the Boston Globe. "I'll look for ... well, it's called racial profiling. Mexicans. Syrians. People who can't speak American. I'm going to go right up behind them. I'll do everything legally. I want to see if they are accountable. I'm not going to do anything illegal. I'm going to make them a little bit nervous."