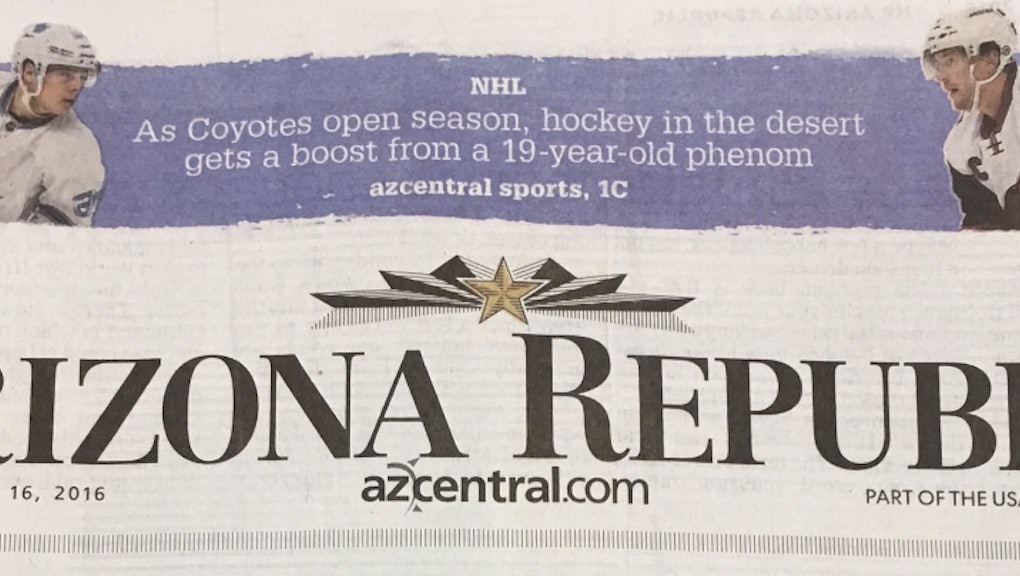 The 'Arizona Republic' got death threats for endorsing Clinton. Their response is perfect.

When this red-state newspaper endorsed a Democrat, the editors expected backlash. What they got were threats to their personal safety.

In September, the Arizona Republic broke with years of tradition and endorsed Democratic presidential nominee Hillary Clinton — the first Democrat to be endorsed by the paper's editorial board since it began publication in 1890. "This year is different," the editorial board wrote at the time. "The 2016 Republican candidate is not conservative and he is not qualified."

The paper's endorsement made headlines across the country — and it also made people angry. The paper was hit with a barrage of death threats after its endorsement. In an op-ed published Sunday by the paper's president, Mi-Ai Parrish, the Republic took a stand against the violence and fear of this election cycle.

Parrish said she was left "speechless" in the face of threats like "watch your back" and "we will burn you down." But, she explained, the paper's editorial board is not backing down from its endorsement.

"More than a year ago, the Republic's editorial board began taking a stand against the actions and positioning of Donald Trump. In piece after piece, we made it clear that his principles weren't conservative. They were bad for the party, bad for Arizona, dangerous for America," Parrish wrote.

The best response to the anger and hate, Parrish explains, is the people who work at the Republic. The people who face the threats every day. Like Kimberly, Parrish wrote, addressing a caller who warned that reporters would be blown up, "the young woman who answered the phone when you called. She sat in my office and calmly told three Phoenix police detectives what you had said."

And Nicole, an editor at the paper: "After your threats, Nicole put on her press badge and walked with her reporters and photographers into the latest Donald Trump rally in Prescott Valley, Arizona," Parrish wrote. "She stood as Trump encouraged his followers to heckle and boo and bully journalists."

Parrish also wrote about her personal life, her immigrant family and the people who welcomed her mother to the U.S. And she signed off the piece with a powerful reminder of the right to free speech, an America principle as patriotic as apple pie. "The journalists I introduced you to here walk into the newsroom every day to do their jobs," Parrish wrote. "When they do, they pass by an inscription that fills an entire wall, floor to ceiling. It is 45 words long. It is an idea that is in my thoughts a lot these days. It is the First Amendment."

As powerful as the op-ed is, it remains to be seen whether it will do anything to placate those threatening violence against the paper. When the piece was posted on the Republic's Facebook page on Sunday, many commenters praised the paper's "bravery" and "patriotism," but some seemed angrier than ever. "You're a commie newspaper that endorsed a dirty commie," one commenter wrote. "You people are garbage."