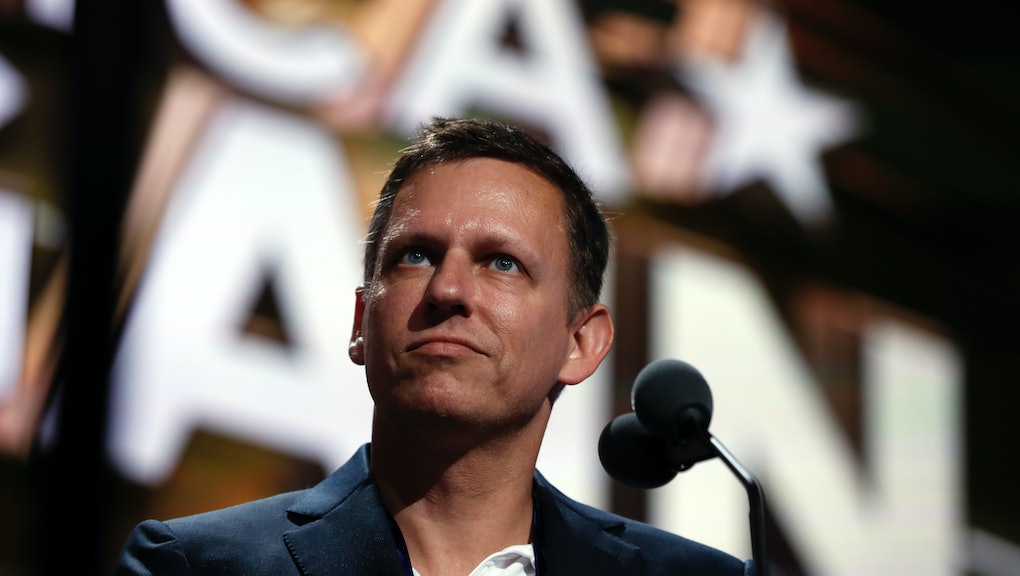 Can a company declare its commitment to diversity and inclusion while a board member is publicly funding the most anti-diversity candidate we've seen in our lifetime? That's the million-dollar question for Facebook.

On Saturday, it was revealed that Silicon Valley titan Peter Thiel, who sits on Facebook's board of directors, would donate $1.25 million to Donald Trump's presidential campaign.

You might argue that it's good for Thiel to represent opposing political views. Thiel himself might argue that "political diversity" — having an openly gay libertarian on Facebook's board — is real diversity. But Thiel's background as an anti-diversity advocate and his substantial backing of Donald Trump go beyond aligning right or left.

As Facebook pledges to increase diversity and improve gender equality, Thiel is funding a candidate who has boasted about sexually assaulting women, labeled Mexicans rapists and called for a ban on Muslim immigrants.

Thiel's position as a member of the Compensation and Governance Committee involves a host of responsibilities, including "developing and recommending corporate governance guidelines and policies" for Facebook. If his campaign against "multiculturalism" and support for a candidate who advocates religious discrimination may influence these duties, CEO and majority shareholder Mark Zuckerberg has an obligation to lose him.

Peter Thiel has a history of fighting diversity

Facebook has spent the last few years making public overtures to diversity and inclusion. "Promoting diversity is a core part of our COO Sheryl Sandberg's public policy advocacy," wrote Maxine Williams, Facebook's global director of diversity, in a blog post in July. "At Facebook, we care enormously about this."

Yet one of the most powerful figures guiding Facebook is Thiel, who for decades has been an outspoken critic of promoting racial and gender diversity. In 1996, he co-wrote The Diversity Myth: Multiculturalism and Political Intolerance on Campus, an indictment of affirmative action and other efforts to make college more inclusive. In the book, he defends a fellow Stanford student who, in 1992, threatened a lecturer by yelling "Faggot! Faggot! Hope you die of AIDS!" and "Can't wait until you die, faggot!" — supposedly as a pro-free-speech protest.

Thiel would like to think himself an arbiter of free speech. He "serves as a primary supporter" of the Committee to Protect Journalists, a freedom-of-the-press coalition, according to his Founders Fund bio. The great irony here: Thiel is the billionaire who covertly funded Hulk Hogan's lawsuit to bankrupt Gawker Media — silencing a news network as part of a personal vendetta.

After the Gawker fiasco, people wondered if Zuckerberg would re-elect Thiel. In June, he did. Many saw the move as Zuck turning the other cheek to Thiel's hypocritical disregard for free speech rights; after all, Thiel had established a blueprint for the rich to dismantle a media company they disapprove of. Not a good look for Facebook, the most powerful news-distribution platform of 2016.

Now the tech community is fighting back

The news of Thiel donating a hefty sum to Trump's campaign has reignited public criticism of Facebook among the tech community.

On Sunday, Slack engineer Erica Baker launched a Twitter thread to explain her disapproval for Thiel's seat on the board. "Let no person who claims to give a damn about diversity and inclusion in one breath even begin to support and apologize for Thiel in another," she wrote.

Y Combinator president Sam Altman also took to Twitter to express his views on Trump, who he described as "abusive, erratic and prone to fits or rage" and added that "the principles he stands for represent an unacceptable threat to America." He also said he disagrees with Thiel's "high-profile support" of the candidate, but that Y Combinator won't "fire someone for supporting a major party nominee."

In response, Project Include, an organization dedicated to accelerating diversity in the tech industry, cut ties with Y Combinator. Ellen Pao, co-founder of the organization, announced the news in a Medium post on Monday.

"At Project Include, our mission is to give everyone a fair chance to succeed in the workplace," Pao wrote. "'Everyone' means all groups to us, but we draw a line at individuals who fund violence and hate."

According to Baker and Pao, a public commitment to diversity can't coincide with leadership that financially supports a candidate embodying principles of discrimination.

Y-Vonne Hutchinson, founding member of Project Include, told Mic, "For companies like Facebook that have struggled with diversity and inclusion, this places their commitment in further doubt."

LaToya Allen, a software engineer in Chicago and founder of SheNomads, previously told Mic that a company's true commitment to diversity is evident in its leadership. Retaining a board member who is funding Donald Trump demonstrates a severe disregard to that commitment.

Thiel's legacy as an anti-diversity advocate discredits the company's stated mission of minority outreach and inclusion.

If diversity is truly a company value, the choice is clear: Mark Zuckerberg should remove Thiel from the board and the company should sever ties with him. Allowing Thiel to maintain his seat demonstrates hostile disregard to minorities in tech, minorities at Facebook and every minority who uses the social network — not to mention anyone who supports freedom of the press.