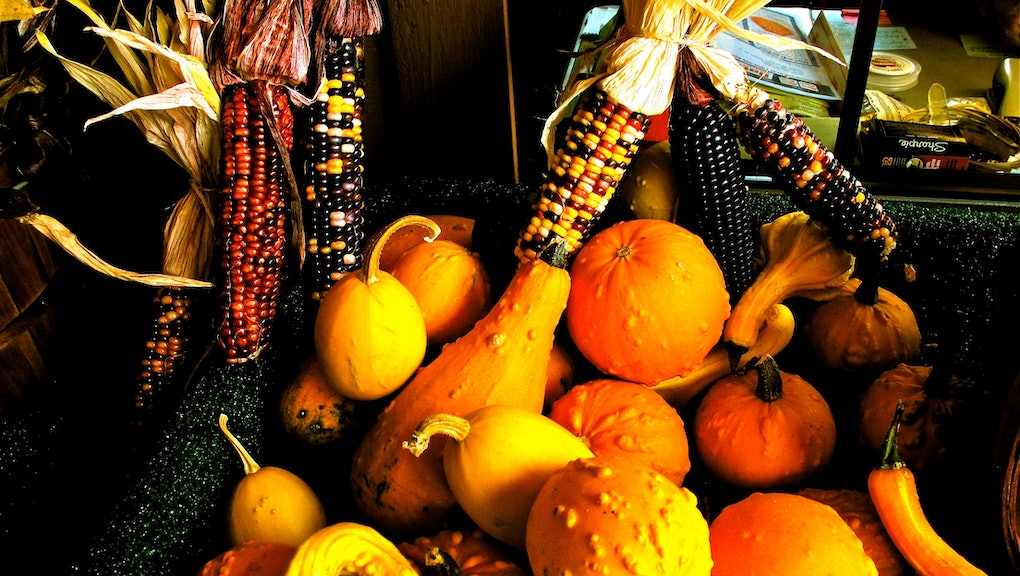 Can you eat decorative gourds? The answer to the question you never thought to ask

But unlike pumpkins, which can easily be turned into pie (or lattes), are these gourds straight off the pumpkin patch actually okay to eat?  Sold at grocery and convenience stores across America, it seems odd that something so vegetable-like would be cultivated and harvested to be used only as decoration.

Part of the Cucurbitaceae family, which includes squash, watermelons and cucumbers, gourds are not toxic to humans, though those sold for decoration may need a good wash before being consumed. We turned to the experts to see if these autumnal decorations can actually be converted into tasty seasonal delights.

"Most gourds are decorative, but I'm a curious chef and I always wonder what you can cook," Ken Oringer, chef and co-owner of the restaurant Toro said over the phone. "As long as they're not going to break a knife in half, you can cook anything... It's just a matter of figuring out what the best way to cook it."

As a professional, Oringer looks at the moisture content of the flesh and toughness of the seeds to determine how to quick any particular squash. While some varieties are completely strange, he has some methods for the more commonly found gourds.

For an Early Whitebush, which Oringer described as looking "like a white ghost", he would roast this tender and softer (you'll notice it's not as shiny as other gourds, which is good) gourd to get soft flesh and use it in a miso banana squash bread, which is prime for breakfast.

The Turk's Turban, which is also not super hard, is "great in soup." At Toro, Oringer has sliced it and fried it Japanese-style as tempura, or Indian-style, with chickpea flour and turmeric, like pakora.

Another common variety, the Bottle Gourd, which Oringer said looks like "a green giant fat eggplant or enormous cucumber," can be used in a Thai-style squash curry, with coconut milk, red curry paste, ginger, lemongrass and fish sauce. Gourds are fun and you should play around with them!

Similar to pumpkins, gourds also have seeds, which are "delicious," Oringer said. For some of the tougher seeds, he would toast them and cook them like risotto with chicken stock or vegetable stock, and mix in onions, garlic, butter and Parmesan cheese, which sounds almost too perfect for a crisp October night.

Jamie Bisonette, Oringer's restaurant partner, also experiments with gourd cooking. For the decorative gourds that do not seem edible, Bisonette recommends hollowing them out (think zucchini or squash boat) and putting dry rubbed pork shoulder with garlic and aromatics in it. "Slow cook the gourd in the oven or grill over low heat so it breaks down and the inside falls in on it and adds a lot of flavor," he said. Also, put a lid on it to capture all the steam while it cooks.

Another secret use for gourds: Seasoning

"In the past I've also dried them in the sun," Bisonette said. "They dry up and get hard and then I put them in stews and treat them like a spice," Just take the seeds out before you dig in! Bisonette would poke holes in the squash as it sun dries and said to expect a flavor similar to squash seed oil or pumpkin seed oil when using the tried gourds to season your winter stews.

Don't throw those decorative gourds away — there's a tasty winter ahead of you, all thanks to Halloween decor.