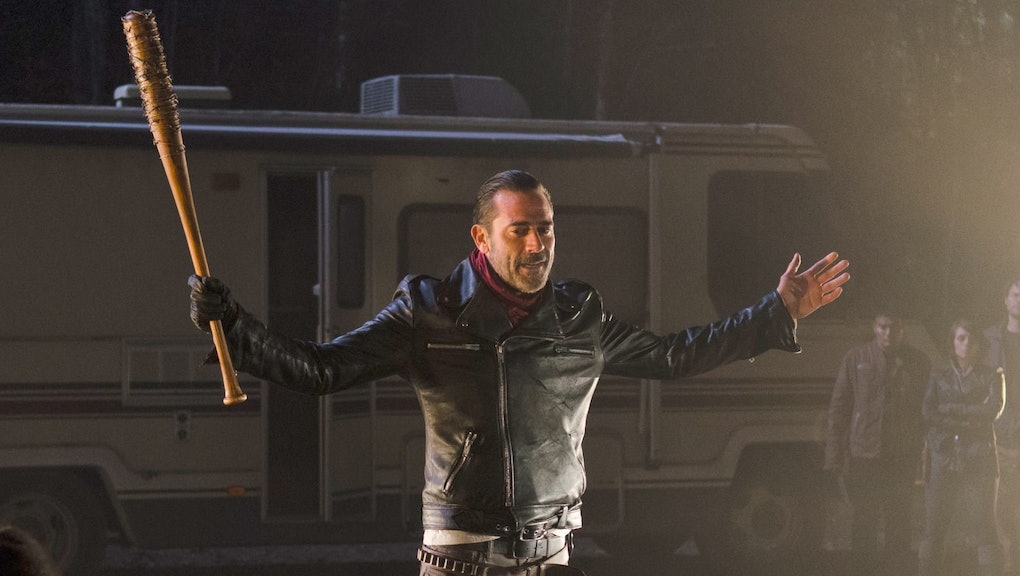 Who Negan kills on 'The Walking Dead' doesn't matter. The show's a zombie, anyway.

The Walking Dead makes its return to AMC Sunday for its seventh season premiere. For the show's impassioned fanbase, it ends months of speculation over its big cliffhanger: Who was on the receiving end of Negan's brutal beatdown in the season six finale?

There's been no shortage of theories as to who was killed at the hands of the show's new villain. And of course, it's possible the series will up the ante and serve up more than one death in the sequence, which would be a departure from the comic book source material.

But ultimately, it doesn't matter who Negan kills off Sunday. No matter how shocking a twist — no matter how heartbreaking a loss — it will not save this show from the narrative mediocrity that's intermittently plagued the series since its inception. The show is stuck in a creative quagmire, and one twist isn't enough to fix the problems.

The Negan cliffhanger is, in a way, a symbolic lightning rod for all the show's pitfalls over its six seasons. These quality drops leave The Walking Dead in the dust of other fantasy series with critical acclaim, like Game of Thrones, which it (quite clearly) seeks to emulate.

Yet barring some major shakeup, The Walking Dead is going to keep sluggishly dragging itself along just like its undead throngs. Here are the reasons why The Walking Dead, once a vital zombie drama series, has itself become undead.

Cliffhangers have revealed the show's in a creative rut. The Walking Dead wasn't always subject to cliffhangers, but it's become prone to abusing the TV trope. Not only that, but it does so in a way that demonstrates the writers are simply running out of ideas.

The Negan cliffhanger is its most recent and indicting moment, but let's not forget: Last season, the show also tried to convince viewers that fan favorite Glenn was unceremoniously killed off aside a dumpster. He wasn't, of course, and the series wasn't decisive in its follow-through. Steven Yuen, the actor who plays Glenn, didn't appear on Talking Dead (the series' after-show) — a long-held tradition for characters who are killed off.

Glenn's ambiguous fate never really had fans concerned — especially comic book readers who figured they would save him for Negan's introduction, since he kills Glenn in the comics — which should've been a warning sign for what they employed for the finale. So why did they do it?

The constant cliffhangers give the impression that AMC is trying to goad viewers into tuning in week by week. It's a strangely desperate tactic to employ when considering that, even after a slight ratings dip in season six, The Walking Dead is still a cable viewership powerhouse. If the cliffhanger addiction isn't ratings-related — which it shouldn't be — the only other thing to chalk it up to is lazy storytelling.

The Negan un-reveal was a blatant middle finger to the series' ardent fans. The Walking Dead's stellar ratings tell another story: The show has a passionate, devoted fanbase. Most shows would kill to have The Walking Dead's ratings, and yet AMC rewards them for their loyalty with constant teasing and very few payoffs.

The fake-out with Glenn's death was bad enough, but similarly, the show also teased Daryl's fate ahead of the season six finale by having him shot as the screen faded to black. The writers rather disturbingly toyed with Maggie getting raped by The Governor in season three. They even spent nearly half a season getting the group to find Beth, only for her to immediately be killed off. The latter was so abrupt that fans signed a petition to bring Beth back. (They were not successful.)

Even after all that, Negan's introduction seemed untouchable by design — something the show couldn't screw up. It's arguably the comic's most iconic moment. It's a sobering reality check in which Rick and the group learn that they're in way over their heads when confronting this new threat. Glenn, the moral compass of the group, gets beaten to death in front of his pregnant wife. That image of Negan sticks with the reader; he instantly becomes someone readers love to hate.

But the TV audience can't experience this death in the same way because it's been delayed for six months. Regardless of who is killed off, the emotional impact of the scene has been dulled. It's an insult to the fans, akin to if Game of Thrones decided to cut their iconic Red Wedding short and save it for the following season.

What fans have done in response — aside from threatening to boycott the show — is provide theories on who Negan may have killed. Spoiler-centric fan sites like Spoiling Dead have continued to provide behind-the-scenes photos from the set. AMC has attempted to police these theories and potential spoilers by sending a cease-and-desist order to the site, and Spoiling Dead announced they won't leak any Negan-related spoilers from the premiere.

How does this make AMC look? The show invited speculation and dialogue when they ended the season on such a frustrating cliffhanger. Certain fans are just looking for closure — and rest assured, if one looks hard enough on the internet for spoilers, they could find them.

Like Game of Thrones' failed attempt to hide Jon Snow's fate after he was killed at the end of season five, The Walking Dead showrunners aren't as clever as they think — and they're insulting their fans in the process.

There's no indication The Walking Dead can get better. The hype surrounding the season seven premiere is a stopgap for a bigger issue: The Walking Dead has nowhere left to go. Six seasons in, and the premise has become stagnant and formulaic.

The group — and its leader Rick, who will seemingly never die as its protagonist — will find a new safe haven, only for it to crumble under unforeseen circumstances, forcing them to move on; rinse and repeat ad infinitum. The show has previously compensated for this with interesting antiheroes, like Rick's frenemy Shane in seasons one and two, and genuinely compelling standalone episodes, like the 90-minute origin story of Morgan's nonviolent philosophy from season six.

Speaking generally, however, the zombie apocalypse concept has worn thin — even more so now, as it's stretched into a spinoff series that tried to break the mold, but is now falling into the same narrative pitfalls as its predecessor.

The season seven premiere could be riveting television that draws excellent ratings for AMC. At the very least, it's going to provide an answer to a cliffhanger that many fans will want to see. But it doesn't take away from an indisputable truth: At this point, The Walking Dead is well and truly lifeless.