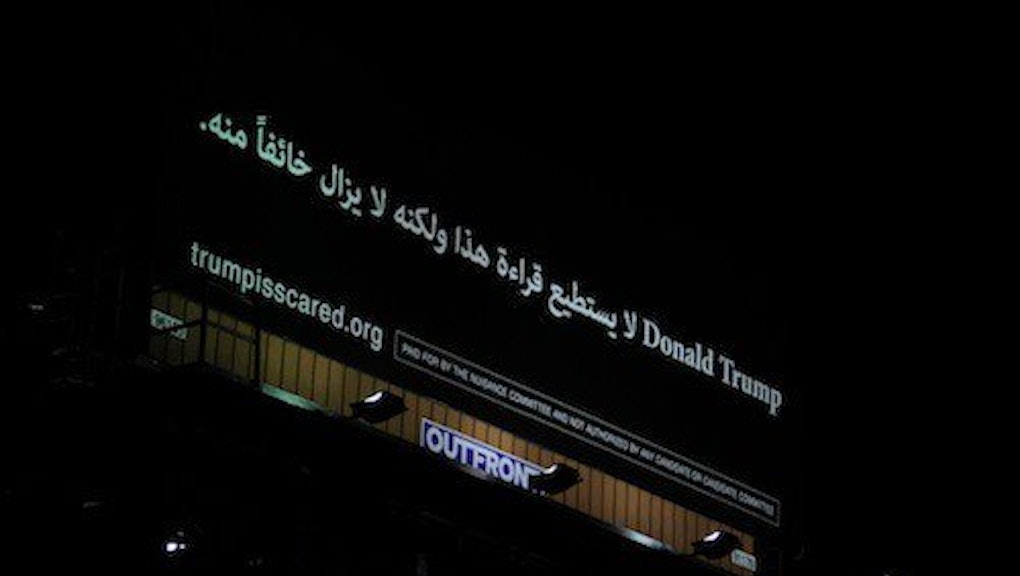 The Nuisance Committee — an anti-Donald Trump political action committee created by the makers of Cards Against Humanity — erected a black billboard written in Arabic to scare off the GOP presidential nominee.

The billboard is located on a highway in Dearborn, Michigan, which has the largest concentration of Arab-Americans in the United States. It simply says "Donald Trump: He can't read this, but he is afraid of it."

According to the Detroit Metro Times, the billboard was made as an outreach effort for local Arabic speakers to get out and vote.

"[The billboard] targets Arabic-speaking voters in the Detroit area and encourages others, who don't speak Arabic but are curious about its message, to ask a friend what it says," the press release said, according to Detroit Metro Times.

This isn't the first time Arabic was used to ironically scare off xenophobes: In August, a woman inside a train in Berlin's subway system was spotted wearing a hysterical tote bag written with Arabic script.

"This text has no other purpose than to terrify those who are afraid of the Arabic language," the tote bag reads.

While racism and xenophobia are no laughing matter, these comedic attempts to prove the sheer ridiculousness in fearing another language have the perfect punchline.