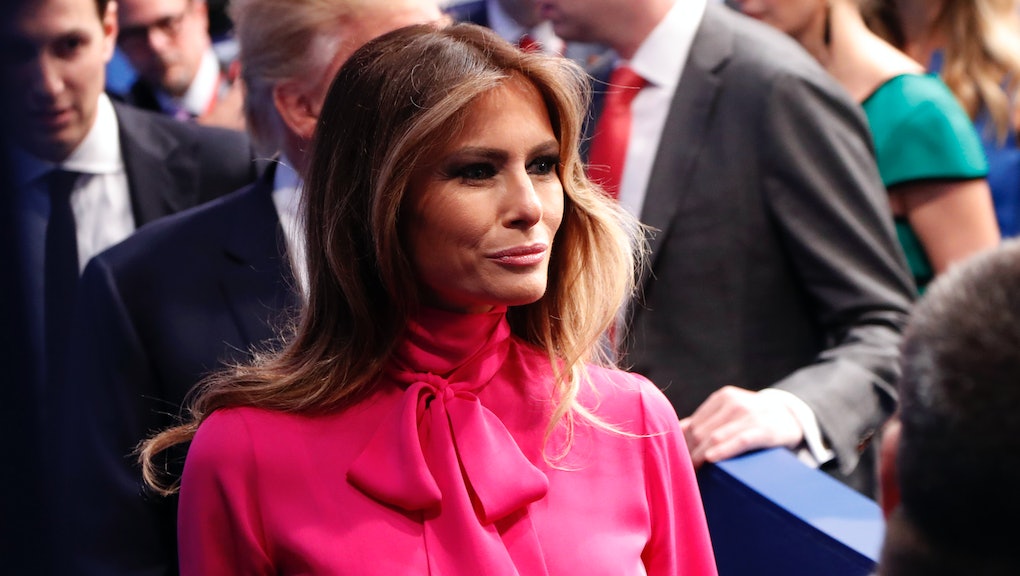 During an interview with CNN's Anderson Cooper on Monday night over a leaked 2005 videotape of Republican nominee Donald Trump bragging about kissing and groping women without their consent, the candidate's spouse Melania Trump tried to portray the Trumps as the victims of a media conspiracy.

Melania Trump noted the video, which captured Trump saying he could just "grab [women] by the pussy" with no repercussions, was possibly recorded while the real estate mogul was unaware he was on a hot mic. She claimed Trump was "egged on" by Access Hollywood host Billy Bush, denied the indisputable video evidence that Trump did "say he did it," and portrayed the release of the 11-year-old video as evidence of an orchestrated media conspiracy to destroy her husband's candidacy.

"It's many people from the opposite side that they want to damage the campaign," Melania Trump said during the interview. "And why now? Why after so many years, why three weeks before the election? ... It was the media, it was NBC, it was Access Hollywood, it was left-wing, it was left-wing media."

Asked by Cooper whether she believed the multiple women who have now accused Trump of assault, Melania Trump responded, "Did they ever check the background of these women? They don't have any facts."

She characterized a People magazine writer who said she was one of those victims, Natasha Stoynoff, as a liar.

In other words, Melania returned to a narrative now familiar with anyone paying attention to the Trump campaign: That the GOP nominee is an eternal victim, with pollsters, fellow Republicans, the media, electoral fraudsters (in this case with barely concealed racial implications) and now an array of false accusers all arrayed against him. Trump calls these various bogeymen symptoms of a "rigged system," but he primarily seems concerned that the system is rigged against him.

Meanwhile, the real victims are not the man whose many self-created scandals have hobbled his path to a presidency he is not entitled to by default. It's the minimum of 11 women who have accused Trump of doing exactly what he bragged about on that tape, as well as the many others who have testified to his history of similar behavior.