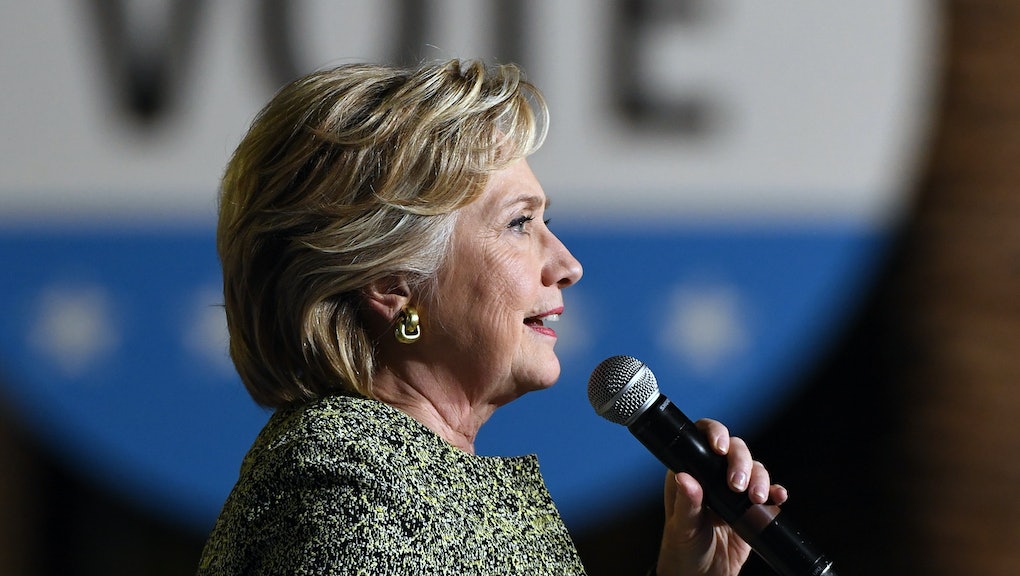 Hillary Clinton, WikiLeaks and the Wall Street speeches: 3 things you need to know

Democratic presidential nominee Hillary Clinton's paid speeches before Wall Street banks like Goldman Sachs have been one of the biggest thorns in her side during her presidential campaign.

They came up in debates with primary rival Senator Bernie Sanders in the spring and have persisted as a point of controversy right up through last week's debate with Republican presidential nominee Donald Trump.

Several media organizations, including the New York Times, have called for Clinton to release the transcripts of her speeches. The Times wrote in February Clinton needs to "convince struggling Americans that she will rein in big banks, despite taking their money."

Clinton has held firm in not releasing her speeches, but whistle-blowing site WikiLeaks seems to have done it for her — leaking alleged transcripts, amid a whole bunch of other emails. The Clinton campaign has declined to confirm the authenticity of the transcripts or emails, according to CNN.

If they are indeed authentic, the emails mark a significant breach: Government officials investigating the leaks are finding growing evidence that Russia is behind the hacks.

One former U.S. official has even said it is "absolutely clear" that Wikileaks is working with Russia, according to reporting by CNN.

Given the information is out there, here are three key questions you might have about the leaked emails, and what we know so far.

How much was Hillary Clinton paid for her Wall Street speeches?

We actually already knew how much Clinton got paid for the Wall Street speeches, thanks to tax information and a list of her speaking engagements in 2013 that her campaign has released.

Between her 2013 State Department departure and her 2015 announcement that she would run for president, Clinton spoke three times with Goldman Sachs, each time earning her standard speaker's fee of $225,000.

During those two years as a private citizen, Clinton gave 92 speeches in total and racked up $21.6 million in fees, according to an analysis of public records by CNN. The eight speeches she gave at big banks, specifically, accounted for $1.8 million.

While she made speeches to a wide range of groups — those given before the Gap and the Economic Club of Grand Rapids, for example, have garnered less controversy — it is the talks at banks that have wrangled her critics the most.

What, exactly, is in the Wall Street speech transcripts from WikiLeaks?

In the leaked transcripts of speeches given before big banks, Clinton speaks less aggressively about bank regulation than she does on the campaign trail.

One of the most upsetting revelations for some of Clinton's progressive supporters might be her alleged claim that Dodd-Frank legislation — the financial reform passed in the wake of the financial crisis — was enacted for "political" reasons.

The transcripts released over the weekend show Clinton saying:

There was a lot of complaining about Dodd-Frank, but there was also a need to do something because, for political reasons, if you were an elected member of Congress and people in your constituency were losing jobs and shutting businesses and everybody in the press is saying it's all the fault of Wall Street, you can't sit idly by and do nothing, but what you do is really important.

And regarding regulation, Clinton allegedly evoked a Goldilocks dilemma: "There's nothing magic about regulations, too much is bad, too little is bad."

That's a much softer stance than she's taken in the past: In a 2015 New York Times op-ed Clinton described how she'd "reign in Wall Street."

At times in the transcripts, Clinton also appeared to criticize her former boss, President Barack Obama.

In a question and answer session with Tim O'Neill, the co-head of investment management at Goldman Sachs, Clinton responded to a question about President Obama's engagement with Congress and whether there could have been more productive results on some issues:

I don't know, Tim. I mean, I've obviously been asked this and I've seen the critique. You know, different presidents have different strengths, they bring different life experiences. I had the opportunity of working with the President closely for four years on some very tough national security issues. He's an incredibly intelligent, thoughtful, decisive person in pursuing the agenda he sets. But he may not, you know, be someone who we think of as spending a lot of time in a give and take of politics; however, I know that he spent a lot of time early on in the first term with the Republicans in trying, as you recall, to put together the [grand bargain] and it turned out that the Republicans' side, particularly in the house, couldn't deliver on even a small [bargain].

In short, the biggest revelation in these speeches might simply be that Clinton speaks slightly differently depending on her audience.

That anti-climax prompted at least some people to wonder why Clinton even held on to the transcripts so fiercely in the first place.

The alleged emails, though? Those might be more damning.

What, exactly, is in John Podesta's hacked emails?

One of the most damaging revelations in WikiLeaks' release of emails sent to and from Clinton campaign manager John Podesta was the campaign's coziness with Clinton's Political Action Committees and the Democratic National Committee.

Such interaction is verboten in a post-Citizen's United world. According to the 2010 decision by the Supreme Court, Super PACs can take contributions to support their candidate — but must spend that money independent of the official campaign.

Essentially, there is supposed to be a strict firewall between the candidate and the PACs.

But, according to the hacked emails as reported by the Intercept, action items on campaign memos allegedly included sharing dirt on rivals with the PAC and the DNC and outlining how rivals would be described; there was also evidence of passed information between the PACs and campaign, including donor lists.

Others who have dug into the document dump have found alleged examples of Clinton campaign dishonesty, disses against conservative Catholicism, a chumminess with the media, and further dissonance between Clinton's public and private persona.

Earlier this month, the Campaign Legal Center, a non-partisan group in Washington, D.C., filed a complaint against the Clinton campaign, accusing it of illegal coordination with Super PACs.

Now, it turns out this coziness between campaigns and PACs is not exclusive to the Clinton campaign: Trump's campaign got a complaint letter, too.