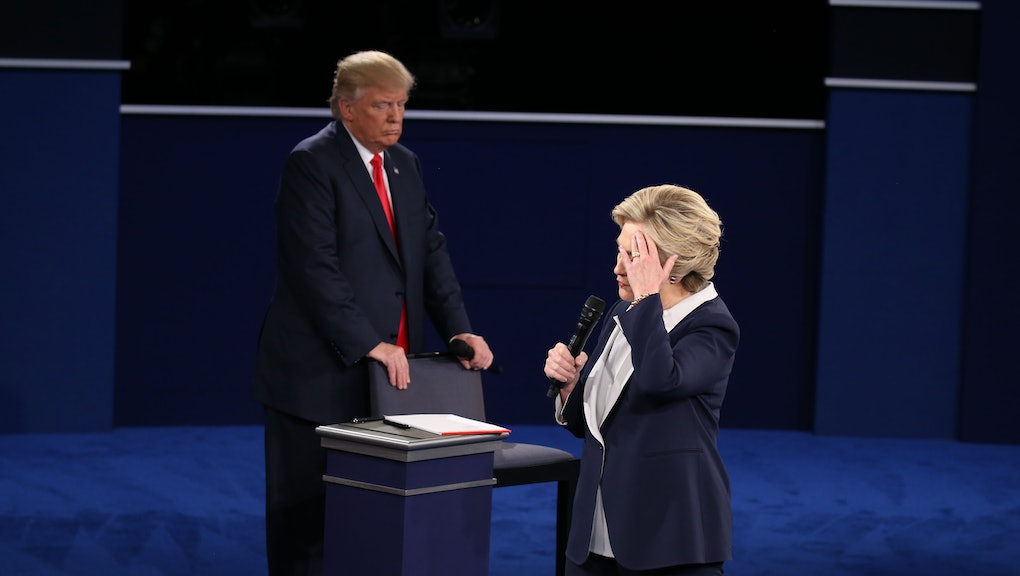 The backdrop of the final presidential debate: A toxic stew of ugliness and paranoia

LAS VEGAS — To hear Donald Trump tell it, the election of Hillary Clinton would not merely represent the triumph of a deplorable liberal policy agenda.

A Clinton presidency, he ominously intones, would pose an existential threat to civilization itself.

Campaigning in Ocala, Florida, last week, the Republican nominee told supporters that the civilized world faced "a moment of reckoning," saying it was up to them to "save our country" from a calcified elite prepared to sell the nation's interests down the river.

"The election of Hillary Clinton would lead, in my opinion, to the almost total destruction of our country as we know it," Trump said.

He doesn't stop there. In the run-up to the candidates' final debate at the University of Nevada campus here Wednesday evening, Trump has depicted Clinton as a rape-enabling, money-grubbing, possibly drug-addled she-devil who belongs in prison but is nevertheless colluding with bankers, the media and "global special interests" to flout the will of the American people and rig the November election.

While national and swing state polls suggest Trump is headed to a decisive defeat next month — sans zombie voters and ballot box-stuffing — the fiery rage he's stoked will smolder long after the final votes have been counted, with potentially corroding effects on the country's political order.

Trump's conduct in Wednesday's debate — whether he continues to dabble in conspiracy theories, attack Clinton as an agent of civilizational collapse or accuse her of criminal misconduct during her State Department tenure — will help set the stage for how his most fervent supporters respond to Clinton's likely win.

"For him to be slowly imploding and then calling the election rigged is telling millions of Americans they shouldn't have faith in the democratic system — without evidence," Nevada-based political analyst Jon Ralston said in an interview.

Though Ralston said that a landslide Clinton victory would make Trump's cries of a rigged election look "foolish," he warned that a close result may fan the flames of conspiracy-minded resentment. A Politico/Morning Consult poll this week found that 41% of voters — including 73% of Republicans — believe the presidency could be "stolen" from Trump via voter fraud.

And with some Trump supporters telling reporters that Clinton may be a legitimate target for assassination — rhetoric that comes after the GOP nominee himself mused that perhaps only "Second Amendment people" could stop Clinton — Trump's increasingly Manichean rhetoric is replete with danger.

But Cheri Jacobus, a longtime Republican strategist who left the party in disgust at Trump's nomination, said he's unlikely to be moved by such concerns, predicting that Trump would eschew policy and stick to a "scorched-earth" approach in Wednesday's debate.

"We haven't heard any background information that he's spending a lot of time studiously preparing for these debates with regard to policy. It appears to me that nobody can control him, that he's off doing his own thing, that he's off the rails," Jacobus said.

"According to his wife, the only person who seems to have any persuasion over him is Billy Bush," she quipped, alluding to Melania Trump's recent claim that her husband had been "egged on" by the former Access Hollywood host into making sexually predatory comments about women.

The firestorm surrounding those comments and ensuing allegations of sexual assault have done more than anything in recent weeks — the two previous debates included — to damage Trump's standing in the race's final stretch. The RealClearPolitics polling average shows the Republican entering Wednesday's debate nearly seven percentage points behind Clinton.

With many Republicans mulling how their party will rebuild from what could mark a historic rebuke, Trump's plan of attack in the debate here is of less than tertiary concern.

Though Trump now promises to "drain the swamp" of Washington corruption, Jacobus said it's the roughly 25% of die-hard Trump supporters — many of whom, she noted, are denizens of the far-right fringe and were never before active in GOP politics — who need to be expelled.

Post-November, Jacobus predicted, "you're going to find that approximately 75% of the people who were at the Trump rallies will claim they were never there — or will claim that they were gawkers, rubberneckers." The vast majority of the party, she said, will seek to avoid a repeat of Trump's often-cataclysmic campaign.

As for the rest?

"I think it's imperative that Republicans rebuild — and preferably without them. A Republican Party that welcomes the alt-right and white supremacists as part of its base isn't a party I want to be a part of," Jacobus said.

Meanwhile, with the Clinton-Trump contest set to reach its denouement in less than three weeks, Nov. 9 will usher in a new period of uncertainty, with the visceral passions Trump has unleashed unlikely to fade quietly into the night.