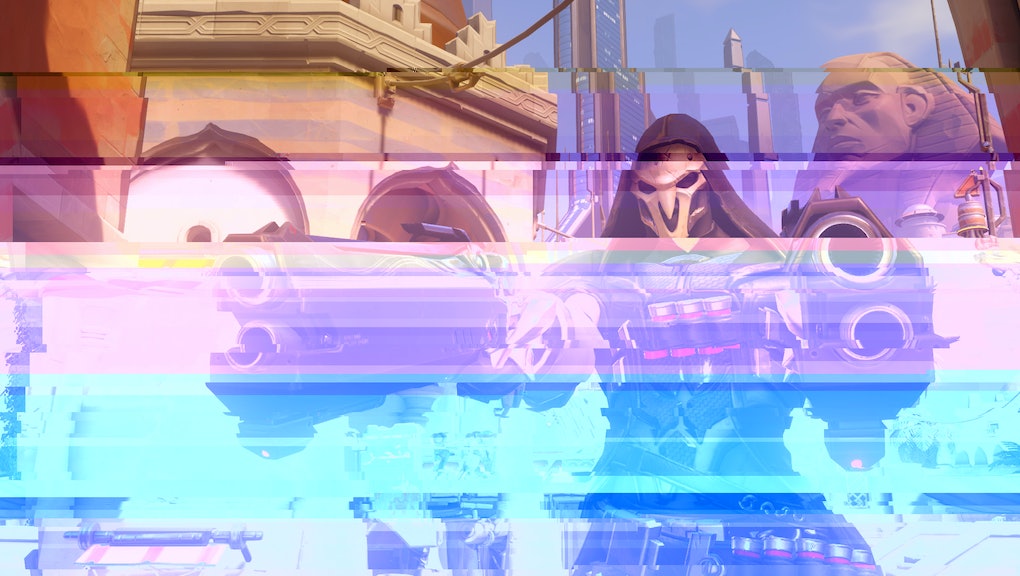 For months, the most hardcore and technically savvy players of Blizzard's multiplayer shooter Overwatch have been datamoshing images, translating cryptic Spanish phrases and running strings of code through ciphers. Why? They're following a trail of breadcrumbs they believe will culminate in the dramatic reveal of a new Overwatch character named Sombra.

For example, the image below was discovered through a post on Blizzard's official forums. After spending a few seconds on the page, you will see it begin to distort, quickly flashing various bits of text. Without getting too far into the nitty-gritty of how it was discovered, all that code eventually led a URL, which linked to the image below:

That image, once its secrets were decoded, led to another cryptic website called amomentincrime.com.

It's all part of what's called an ARG — alternate reality game — in which Blizzard is leaving hints and riddles in various corners of the internet for its players to find and decode. Except, in the alternate reality of the game, the clues are actually coming from Sombra herself. It's all very complicated.

As of yet another much-hyped but seemingly anticlimactic development in the ARG Tuesday afternoon, fans are getting fed up with all this breadcrumb chasing.

When will Sombra be revealed?

For the past two months, a loading screen on the website amomentincrime.com — which was discovered to be related to the Sombra ARG — was slowly ticking up to 100%. Many thought this would mark the final reveal of Sombra, but unfortunately, it was just another cryptic breadcrumb that didn't satiate anyone's hunger.

Which roughly translates to:

And that's pretty much it. The phrase "Bastion Unit E-54" refers to the robotic Overwatch character Bastion, but it's unclear exactly what it means.

Understandably, players are pretty frustrated with the lack of concrete information. Some of the most popular threads on the Overwatch subreddit included "Blizzard please do not treat any heroes in the future like you have with Sombra" and "What the fuck was the monthlong countdown for?"

Over in the Sombra ARG megathread, there's a deluge of comments that look like this:

Keep in mind that a few weeks ago, what appears to be a leaked image of Sombra was posted online, so players seem to be frustrated that Blizzard isn't dropping the ARG and just acknowledging the existence of the character.

BlizzCon 2016 starts on Nov. 4, so that's when people are expecting the next big development in the Sombra ARG.

Hopefully it will be a substantial step, but Mic will keep you updated either way.