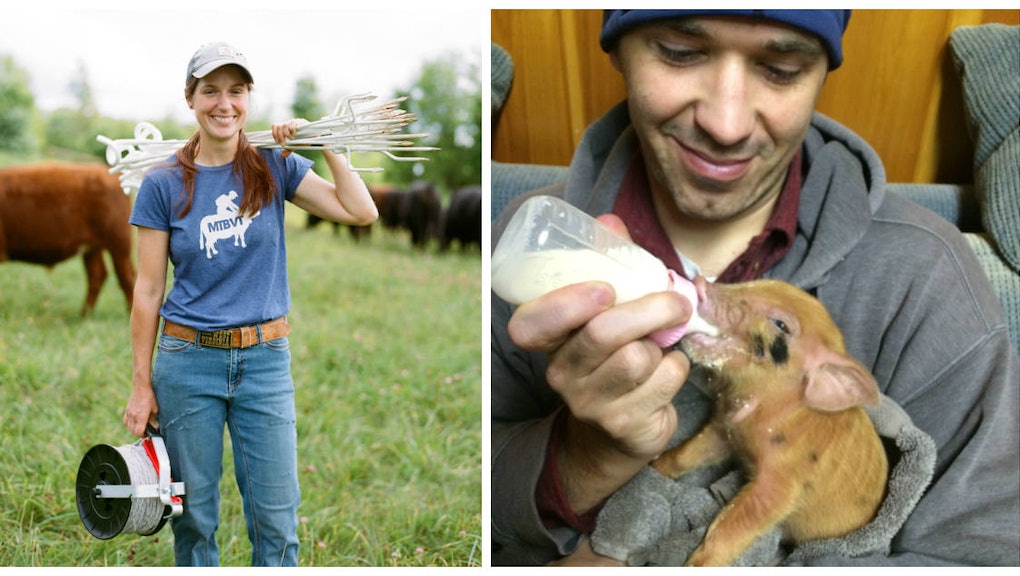 Amber Reed often forgets her boyfriend of 12 years is vegetarian.

Which wouldn't be that funny except, well, Reed's job is raising animals for slaughter. She's the head farmer at Woods Hill, an all-organic, 360-acre property in Bath, New Hampshire, where she raises pigs, cows, laying hens, broiler chickens and lambs that are later served at Woods Hill Table, a sustainable restaurant in Concord, Massachusetts.

Reed wakes up in the middle of the night to transport chickens to a slaughterhouse. Her other duties include shepherding 75 pigs through a forest area, herding cows through farm pastures and caring for sows.

Sam Critchlow, Reed's boyfriend who lives with her on the farm, has not eaten meat since he was 11 years old. He went vegetarian because of his love for animals, he said in an interview, explaining that he's remained a vegetarian so he doesn't have to micro-analyze the ethics or environmental impact of every meal he eats.

Neighbors of the livestock farm are often surprised when they learn Critchlow doesn't eat meat, Reed says, which is, for some reason, surprising to hear. A vegetarian dating a pig farmer? Seems like the start to a bad joke.

But, if you think about it, food must be confronted several times a day while other "deal breakers" typically crop up in conversation less frequently. Eating is a daily ritual, and researchers estimate we make upward of 200 food and drink-related decisions every day, according to Cornell University.

Dietary preference is even treated like a dating niche — you don't have to search hard to find vegetarian dating sites, Paleo dating sites, vegan sites, gluten-free dating sites and even a site for people with food allergies. Clearly, we're living in an age where one can cherry-pick mates based on food preferences.

So how does a farmer who sends pigs off to the slaughterhouse find common ground with her vegetarian boyfriend? At face value, the couple has seemingly incompatible world views — here's how they've managed to make their love last.

"I think we were really different," Reed said. "And that's part of the reason we were interested in each other." The couple started dating when they led canoe expeditions in Maine and Canada when they were 21. They had actually first met each other as kids because Critchlow's mother hired Reed's stepfather to build a wigwam for the Children's Museum of Maine. Not your average meet-cute... kismet, perhaps?

He was a skater boy, literally, Reed said. While he was a "city boy" who grew up skateboarding in Portland, Maine, she "was a backwoods kid" who grew up in Virginia and later Central Maine, where she ate the raccoons, bear, deer and moose that her step-father hunted. ("Porcupines aren't that good, just so you know," Reed said, explaining that her step-father used all the parts of the animals and would even eat raccoon testicles. She denies eating them herself.)

"We'd be out on these canoe trips and she'd know not only all the plants and animals that were around us, but she'd know their food and medicinal purposes and like, about the ecosystem and the natural history," Critchlow said of their canoe expeditions. "She knew so many things I knew nothing about."

Two and a half years after they got together, the couple moved to Leadville, Colorado. Critchlow taught at High Mountain Institute, an experiential learning high school in Leadville, and Reed worked at a grass-fed beef ranch called Quivira Coalition. As if the couple couldn't get any more crunchy, they read Omnivore's Dilemma out loud in the car ride out west.

But this pig farmer and her vegetarian boyfriend argue over the same mundane things a pair of omnivores (or vegans, or gluten-free people, or any pair) might.

"Laundry sorting is way more of an issue than what we're eating," Reed said.

"Or how the dishwasher gets loaded. Amber has the wrong idea about how to do these things," Critchlow said with a laugh.

Reed and Critchlow don't disagree on what to eat for dinner — they eat together all the time and often take turns cooking. Reed will wash out the pans she uses for meat; "Although I might have [forgotten to do] that once," she giggled. ("I don't care," he chimed in.)

"You know how it is in a relationship — you don't expect a person to fulfill every tiny need that you have, that's impossible." — Amber Reed, livestock farmer

Favorite meals include pizza, pasta with mushrooms — Reed often uses meat as a topping or side instead of a centerpiece in many meals, and the couple loves eating Indian foods that have a lot of protein-rich vegetarian options.

"The truth is, I get to share the meat from this farm with so many people who really appreciate it that it's OK that Sam has other things that he enjoys," she said. "You know how it is in a relationship — you don't expect a person to fulfill every tiny need that you have, that's impossible. I just enjoy my meat sharing [laughs]... with other people."

Life and death on the farm

Saying goodbye to the animals that get inevitably sent to the offsite slaughterhouses makes Reed sad, but she likes to focus on how the cycle of life can be beautiful too. She gets to save animals that are sick or have health problems at birth and give them the most "fabulous life possible" before they get slaughtered. "Maybe that's the feeling that doctors get to have when they do some amazing save in the ER and someone gets to go home and finish their life," she said. "I don't know. It's kind of crazy, though because you save a lamb and then you eat it nine months later."

Would Critchlow consider eating the farm's sustainably and humanely raised meats? Short answer: No. Long answer: "[Being a vegetarian has] been part of my life. I see the farming that Amber and some of her friends and community do. I see them as totally viable, compatible answers to the same question that I have about my food. I think we have different answers, but answers that aren't incompatible." That seems to be where Reed and Critchlow's beliefs intersect: They both care deeply about living ethically through their food and work.

"What I see in [Amber's] farming and my vegetarianism is actually pretty much the same thing: How do we choose food that is respectful of the environment and that gives the planet, animals, plants and people a good life?" Critchlow said.

But when it comes down to it, the pair said reconciling differences is key for good communication in any relationship. Like religion and politics, someone's food preferences might be influenced by how they grew up. And learning about someone else might just push you to see the world a little differently.