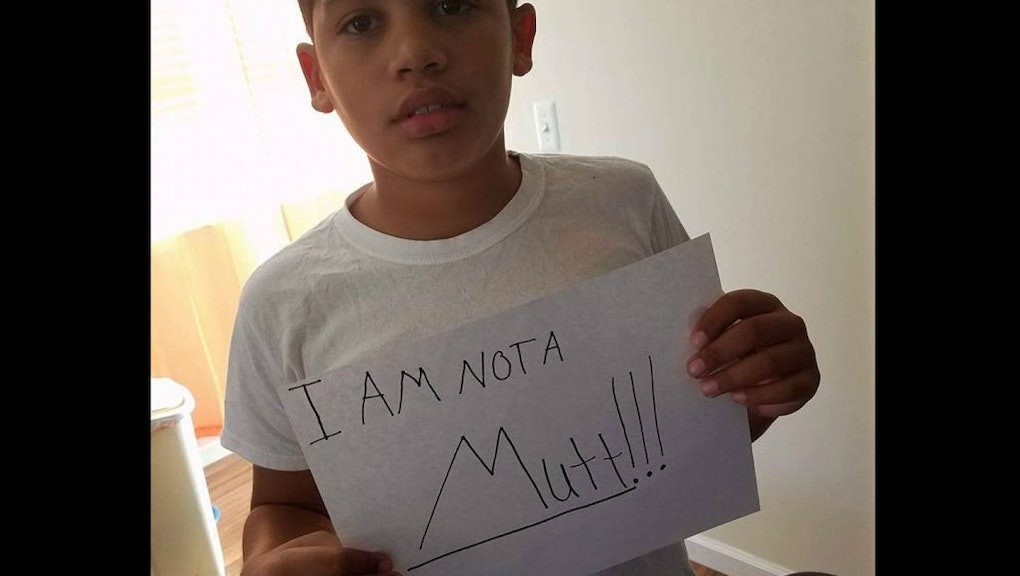 Mixed-race children are human beings and not dogs.

Apparently, one teacher at Wolfe Middle School in Center Line, Michigan, didn't get the memo when she called one of her students — who is biracial — a "mutt," according to Fusion.

Kaden Brown was sitting in class when his language arts teacher looked at him and bluntly asked, "Are you a mutt?"

Brown didn't initially understand the meaning of "mutt" until a classmate explained how it is used as an offensive term against people of mixed-race background.

Brown's father, Kevin, posted a statement on Facebook to address the incident.

"[Being called a mutt] left my son, my heart and joy feeling like he meant nothing, that he was less than nothing," Brown wrote in an Oct. 13 Facebook post. "He even went home and asked his mother, 'Why can't I be all white', he wants to disown his African-American heritage for his mother's German, Italian, Irish heritage (guess his mom is a mutt too)!!!!"

Kevin Brown then went on to explain how the teacher's remarks were racist.

"This teacher made my son feel dirty, calling him a mutt, a dog with no identity who doesn't belong. I AM OUTRAGED!!! This racist behavior should not be allowed in our schools, our children should never be faced with this BS, especially in the classroom from people that we (parents) entrust our children's protection."

The Facebook post has inspired other people who identify as mixed-race to join Kaden and come forward with their own stories of racial prejudice and discrimination. Twitter users also used the hashtag #IAmNotAMutt to show their pride in their mixed-race identity.