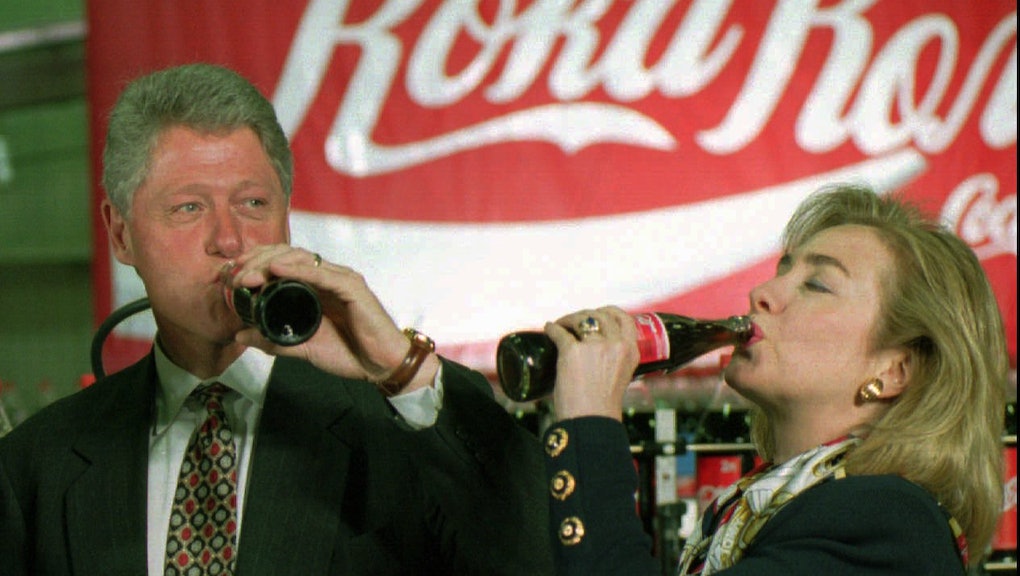 Hillary Clinton's emails were a point of contention long before the presidential race even formally began. While her opponent and critics can't drop the 33,000 mystery emails that disappeared from her servers (best guess: Seamless receipts and J. Crew sale emails), Wikileaks hacked into the presidential candidates emails this past week to reveal some connections to Coca-Cola that soda-loving/hating Americans aren't super happy about.

One leaked email from hdr29@hrcoffice.com (i.e. Hillary Clinton) on March 17, 2016, allegedly shows that she was potentially considering big-wig CEOs as running mates. On the shortlist: Apple CEO Tim Cook, Starbucks CEO Howard Schultz and Coca-Cola CEO and Chairman Muhtar Kent, who notably told Fortune in 2012, "I'm very proud to have been raised as a secular Muslim." Competing against America's, if not the world's, best known businessperson, one can see why Clinton and her staff may have wanted to add a corporate leader to their campaign.

What's the big deal with Coca-Cola?

The Atlanta-based company is always a hot button issue, perhaps because of how ubiquitous it is. Everyone knows and recognizes Coca-Cola and therefore everyone can form an opinion on the product and the business.

Clinton's connection with the brand, however, is more than just a potential vice presidential pick. The Coca-Cola Company is publicly listed as having donated between $5,000,001 and $10 million to the Clinton Foundation in the second quarter of 2016, i.e. between April 1 - June 30, 2016.

In April 2016, Clinton endorsed Philadelphia's soda tax, which adds a few cents to the cost of every soda sale, with the funds used to support universal preschool. The tax law passed in June, making Philly the first major city (Berkeley was the first city of all) to mandate a soda tax, after Mayor Michael Bloomberg failed to create one in New York City during his last term.

As some may remember from U.S. history class, taxing beverages makes Americans angry, especially Americans who work in the soda industry and want their products to be easily affordable and accessible to anyone and everyone. The reason why Coca-Cola as a corporation would want to woo Clinton away from supporting any more soda taxes is obvious.

Coca-Cola's North American marketing chief, Wendy Clark, also took an unpaid leave from January to April of 2015 to help work on the Clinton campaign, which, of course, any individual could choose to do (assuming their company sanctioned the time off), but the connection between Coca-Cola and the campaign becomes even more entangled with this detail.

Does Coca-Cola even have the power to influence Clinton?

We can't be sure. But Coke has shown its persuasive abilities in other instances.

This isn't close to the first time Coca-Cola has been spotted attempting to interfere with American life. In 2015, the New York Times proved the soda giant had influence by funding studies that fall in its favor. These studies emphasized that exercise output is more important for weight loss than is calorie intake. (Exercise alone, it turns out, won't much fuel the quest to lose weight.) Additionally, the company has gifted multi-million dollar grants to universities as well as nonprofits to put an emphasis on working out as the most important component of healthy living.

So what do the hacked emails prove?

Hacked emails posted on DCLeaks show a record of Clinton campaign staff cozying up with Coca-Cola executives, or at least, conversing with them in a way you may not want the leader of the free world to be.

Emails allegedly sourced from Capricia Marshall, a friend of Clinton's and former White House aide, reveal Coca-Cola executive Clyde Tuggle responding to the news that Clinton endorsed Philadelphia's soda tax: "Really??? After all we have done. I hope this has been falsely reported," one email from Tuggle reads. (Soda taxes have proven to be effective, by the way.)

A follow-up email from the next day, sent by Katherine Rumbaugh, vice president of government relations for Coca-Cola North America to Coca-Cola executives, including Tuggle, reads, "we've confirmed that there is no continued conversation around beverage taxes today and in future engagements – campaign is not going to drive conversation here or weigh in further."

While no direct emails from Clinton herself are seen in this hack, the situation is not ideal for a politician who doesn't want to appear to be swayed by corporate interests.