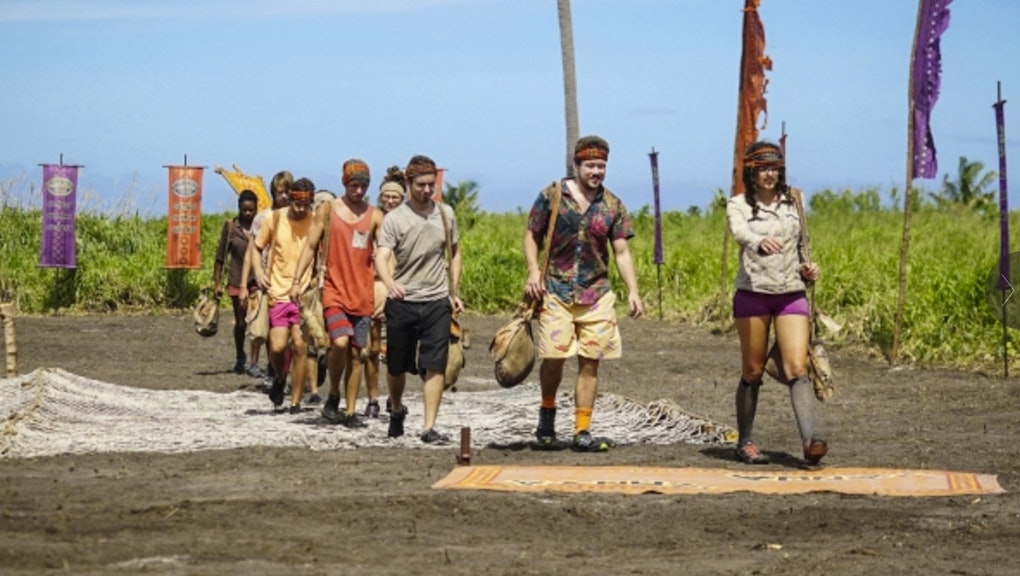 It seems even CBS was getting tired of this season's contrived generational divide.

There's a major shake-up on the fifth episode of Survivor's 33rd season: After drawing new buffs, the millennials and Generation Xers split into three new tribes, each a blend of old farts and young whippersnappers. At the end of the episode, a few new tribe members prove age differences don't matter; they band together and blindside Ciandre "CeCe" Taylor, making her the fifth player eliminated from the game.

Things pick up again at Camp Gen X, where David Wright is absorbing the weight of his perplexing decision to play his hidden Immunity Idol on Jessica Lewis' behalf a mere four episodes into the season. Jessica, meanwhile, is grateful to still be around, and works to get back into Ken "Manly Man" McNickle's good graces. She tells Ken about the Legacy Advantage she found in the premiere — and says she'd have passed it to him if voted out.

If David had anxiety about playing his last hidden Immunity Idol, it doesn't last long; he finds yet another one tucked inside a log. Hey, David: Don't blow your luck by playing your new idol on behalf of a hermit crab or a passing cloud. Save it for when you really need it!

Itching for CBS to kick its thrilling social experiment up a notch? You're in luck! Instead of battling it out in a Reward Challenge, the two tribes get a surprise from host Jeff Probst: They're to draw new buffs and divide into three new, blended tribes. Orange will go back to the millennials' former camp, purple will go back to the Gen Xers' former camp and green will head to a new beach, where they'll have to start from scratch. Ouch.

Will the players stay true to their old tribe members — or will they bridge the generational gap and form new alliances?

The latter looks to be true over on team purple, where an utterly smitten Taylor is eager to maintain his relationships — both strategic and otherwise — with Figgy. But Figgy is nervous about public displays of affection; she doesn't want them to be targeted for being a couple. Or maybe it's that Taylor hasn't showered in weeks.

"I really think us being a power couple isn't really different from two people in an alliance that really trust each other," Taylor whines to the camera.

Adam may be their former millennial teammate, but watching Figgy and Taylor's mating ritual, he looks like he's going to be sick. So he goes for a walk with Ken — and the pair totally bond. "He's respectful and polite," Ken says of Adam, relieved that finally someone around here recognizes his greatness.

New alliances are growing on the orange tribe, too, as Zeke and Chris bond over their shared Oklahoman heritage. "It's like the heavens open and the lights shine down and finally I catch a break in this game," Zeke says.

Thinks aren't so bright and sunny over on team green, where everyone's hungry and no one can seem to get a fire started. When Jay gives up, Michaela takes over — and with some incredible determination, manages to make fire.

Remember that time I said Adam should be your new fave contestant? Now, it should be Michaela. She's so proud of herself for starting a fire, she retreats to the forest to cry. Believe it or not — despite being a cursed millennial — Michaela knows the meaning of hard work; she worked to put herself through college and pay off her loans, she explains to the camera. When Michaela returns to the beach post-cry, the whole tribe applauds her arrival.

It's time for the Immunity Challenge! One by one, the tribe members dive into the ocean for a buoy, remove the ball from on top of it, swim to a dock and toss the ball into a pen. When the tribe members collect all of their teams' balls, they lasso a net and race to land five baskets.

Chris may have been good at college football, but he's exceptionally bad at Survivor Immunity Challenge basketball. Fire Queen Michaela leads the green tribe to victory, while Ken earns the purple tribe a second-place finish. The orange tribe comes in third, meaning they're headed to Tribal Council.

Back at the orange tribe's camp, strategizing kicks into full gear. CeCe figures she's safe — she's in the Gen X majority with David and Chris. They'll stick together and vote out either Zeke or Michelle, right?

Perhaps not. Emboldened by his newfound friendship with Zeke, Chris decides it might be nice to blindside CeCe, instead. Chris tells David his plan — and then the two of them recruit Michelle and Zeke to join them.

The blindside seems to be shaping up nicely — until David almost throws his Immunity Idol into the garbage again. With CeCe gone, David realizes he'll be the weakest person left on the tribe — so perhaps he should give his idol to CeCe and have Michelle sent home instead.

Listen to me, David. You could save that idol until after the merge. Don't. Screw. This. Up.

Thankfully, David performs better at this week's Tribal Council than last week's; he doesn't play his idol after the tribe casts its votes. CeCe gets three votes cast against her — enough to send her home. Chris, David, Zeke and Michelle successfully worked together and orchestrated a blindside. It's almost as though — gasp — millennials and Gen Xers aren't so different after all.