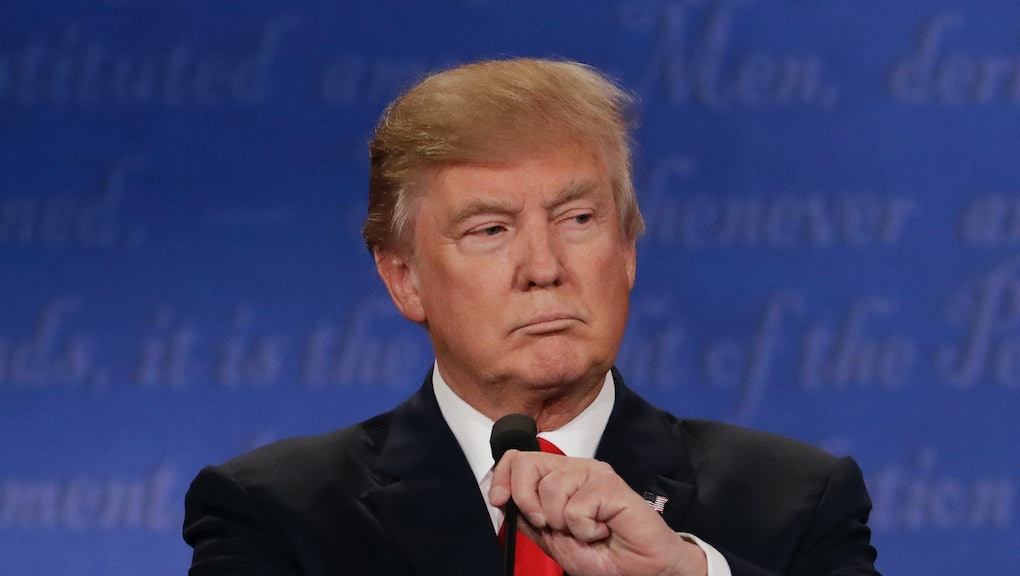 LAS VEGAS — Donald Trump had little room for error in his final televised debate with Hillary Clinton. Practically none, in fact.

The Republican nominee came to the University of Nevada campus here on Wednesday down an average of more than six points in the national polls, his campaign battered by spiraling accusations of sexual misconduct.

The pre-game punditry: Trump desperately needed to dial down his shoot-from-the-lip style, ratchet up the gravitas and make a grand-slam case for his presidency in a debate that was Clinton's to lose.

No surprise in a devastatingly divisive campaign: Opinion on whether he did what he needed to do fell mainly along partisan lines.

At the end of the 90-minute one-on-one, Clinton kept her summation positive and focused on herself and what she'd do as president; Trump's was a mix of bedrock campaign promises and digs at his Democratic rival.

Possibly stepping on his own message, however, the GOP nominee showed his reality show roots — and set off a media firestorm — by hedging on whether he'd accept the outcome of the election.

"The bottom line is [Trump] has to, has to change the trajectory of the race. We're inside of three weeks [until the election]. The bottom's starting to fall out. He has to stop this and turn the entire race around. A draw won't cut it," said Georgetown University's Mo Elleithee, a former aide to both Clinton and her running mate, Tim Kaine, in the spin room ahead of the kickoff.

Trump came out of the gate looking calm and speaking in grave, measured tones about his commitment to nominating a pro-life conservative to replace the late Antonin Scalia on the Supreme Court.

Things heated up before half an hour had elapsed.

Clinton took Trump to task on the involvement of Russia's Vladimir Putin — arguably a beneficiary of the Wikileaks drops on Clinton and American instability in general — in U.S. affairs, demanding, "Finally, will Donald Trump admit and condemn [that] the Russians are doing this?"

Trump flared back that Putin has "outsmarted and outplayed" Clinton and President Barack Obama at every turn; the exchange devolved into a volley of name-calling.

In another critical moment at the end of the debate's first hour, Trump had to face the question of the misconduct allegations against him head-on, courtesy of Fox News Channel moderator Chris Wallace. His response mingled denials with a counterattack on Clinton in which he lobbed unproven allegations that her supporters had fomented violence at his rallies.

If Trump appeared to try to avoid the name calling, sighing and visible frustration he displayed while debating Clinton in New York and then Missouri, there were many moments where his classic style broke through.

Perfect example: Clinton went on the attack over Trump's claims that the election is "rigged" against him, dismissively saying he'd whined about the same thing when his reality show failed to score an Emmy three years running.

"I should have gotten it," Trump broke in.

It remains to be seen if voters interpret throwaway lines like that as Trump showing a lighthearted cockiness or simply lacking the depth to lead the nation.

At times, the debate seemed to sink into tit-for-tat territory emblematic of the rapid-fire, attack-driven nature of the entire campaign.

"John Podesta said you have terrible instincts. Bernie Sanders said you have bad judgment. I agree with both," Trump jabbed. Clinton pushed right back that Sanders had labeled Trump "the most dangerous person to run for president in the modern history of America. I think he is right."

In the end, Republican strategist Thomas Basile, who analyzes politics for Forbes and Sirius XM radio, put it this way:

"In many ways, this was Trump's best debate, but he proves again that he is the Yogi Berra of American politics. There are significant points that he makes about problems facing the country and reasons to seriously question the trustworthiness of Hillary Clinton. The question remains whether people watching and listening can sift through his disjointed delivery to recognize the validity of some of his points. 'She's a disaster and I'm going to do great things' isn't the kind of specifics and real counter-punching that Trump needed to do. There were missed opportunities."

Basile, who like Elleithee has previously broken down this cycle's debates for Mic, said Trump managed to make a closing play for voters with his endgame talk about "law and order, veterans and the plight of inner cities," but in the end, "all anyone will talk about [Thursday] will be his refusal to accept the [election] results."

Elleithee's post-debate verdict: "Terrible. [Trump] doubled down on conspiracy theories and refused to say that he would accept [the] election results if he lost. Game. Set. Match."

Trump has a core base of followers, with diehard GOP voters, social conservatives, immigration hardliners and Clinton haters among them.

His third and final debate performance likely did little to alienate those voters, but more critically, it's not obvious that his last appearance with Clinton did anything dramatic to draw supporters from her camp or sway those who are undecided or considering a third-party candidate.

Trump has been counted out many times in this roller coaster race and he's defied the odds.

But with just weeks to go before the country makes an essentially binary choice for its next leader, to say Trump's got an uphill climb to defeat Clinton would be an understatement — big league.