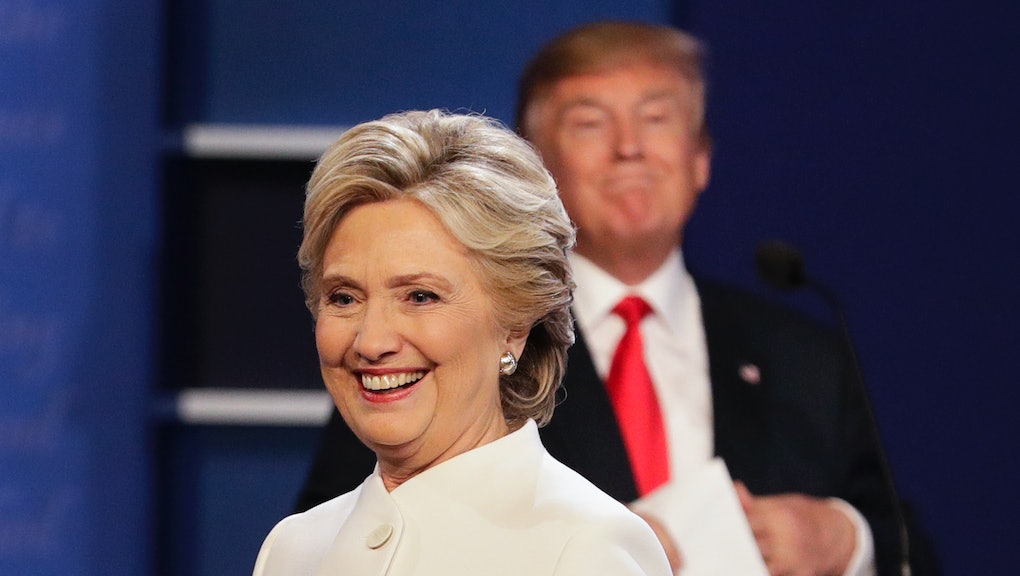 Election Predictions 2016: Here's who's likely to win the presidential election

Whether Donald Trump accepts the outcome or not, Hillary Clinton is on course to become the first woman ever elected president of the United States on Nov. 8, with the latest polls and top forecasts pointing toward a third consecutive White House term for the Democrats.

With less than three weeks until Election Day, Clinton has a number of plausible paths to the 270 electoral votes needed to secure the keys to the Oval Office, while Trump's always-narrow path to 1600 Pennsylvania Avenue appears all but closed.

Clinton's roughly six-point national lead translates to a decisive advantage in the states that will tip the November election. According to polling averages compiled by RealClearPolitics, Clinton leads in states totaling 333 electoral votes, while Trump takes 205.

Not only has Clinton moved into a slight lead in traditionally Republican Arizona, polls also show that she's within striking distance of Trump in GOP strongholds like Texas, Georgia and South Carolina. Clinton has also led slightly in every recent poll of North Carolina, a state without which Trump has virtually no chance of victory.

Even Utah may elude Trump; recent polls suggest the Beehive State could break for Trump, Clinton or Evan McMullin, a conservative independent who has sought to capitalize on Trump's deep unpopularity with Mormon voters.

Trump does stand a chance of nabbing Ohio and Iowa, states President Barack Obama won twice, but victories there would not be enough to compensate for Trump's near-certain losses in traditional battlegrounds like Pennsylvania, New Hampshire and Virginia — to say nothing of states like Arizona.

With Trump confronting such brutal dynamics, Nate Silver's FiveThirtyEight pegs Clinton's chances of victory at about 85%. The New York Times' Upshot model gives Clinton a 92% chance of winning, while the Princeton Election Consortium says her chances are roughly 97%.

The candidates' Wednesday night face-off in Las Vegas offered Trump his last chance to redraw the contours of the race — an exceedingly difficult task at any rate, and one he failed to accomplish.

Experts said even a draw would mean an effective loss for Trump, given his disadvantage heading into the debate. Yet scientific polls taken after the showdown indicate that viewers think Clinton won. Respondents to a CNN/ORC poll said by a margin of 52% to 39% that Clinton came out on top, dovetailing with a YouGov survey, which found a 49% to 39% spread in Clinton's favor.