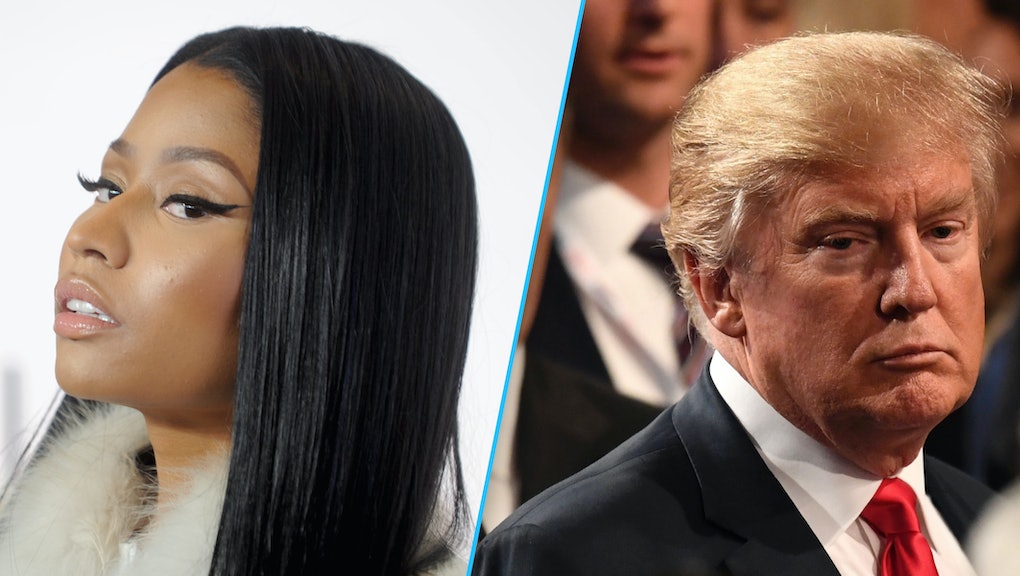 If you've ever listened to Nicki Minaj rap, you know one thing about her: She loves to laugh. On Thursday afternoon, Minaj shared with her Instagram followers the latest cultural phenomenon to give her the chuckles: Donald Trump.

"Yo, I'm crying," Minaj wrote on Instagram Thursday. "Like this man really said 'bad hombres' at a crucial debate while running for president of the USA!"

Knocking his Spanish-language proficiency, she added: "And pronounced it as 'hambre' like he hungry!"

During Wednesday night's debate, Trump mentioned that the United States had some "bad hombres" that had entered the country because of lax immigration policies. "We'll get them out, secure the border and once the border is secured at a later date we'll make a determination as to the rest," the candidate said. "But we have some bad hombres here and we're going to get them out."

According to Merriam-Webster, as reported by CNN, searches for "hombre" spiked 120,000% over the site's hourly average. It led to a sardonic tweet from Merriam-Webster late in the evening about having to write "an hombre/ombre/ombré" explainer.

To Minaj, the whole scene was way too farcical to watch with a straight face. She wrote in her post that Trump resembled a presidential candidate from the Will Ferrell comedy film The Campaign more so than an actual president.

"In the movie, the craziest shit they do keeps inadvertently moving them up in the polls!" Minaj wrote. "Donald is Will Ferrell in that movie y'all please watch if you haven't seen it!"

We know Minaj has no problem getting political, even if she gets in hot water because of a Mitt Romney rap. Yet her strongest political position yet came at the end of the post: "I think Michelle should absolutely run in 8 years," Minaj wrote.

Michelle Obama has said many times she doesn't want the job, Minaj just said what so much of the internet is already thinking.