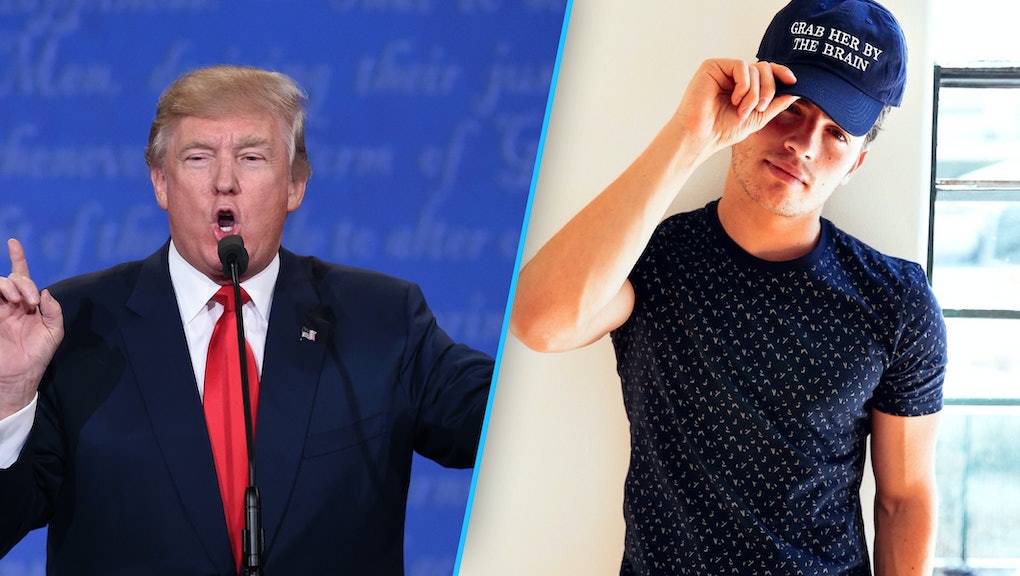 By this point, there's little left to say about Republican nominee Donald Trump's "grab them by the pussy" comments. Nearly two weeks after the Washington Post leaked the incriminating audio, we've not only heard every iteration of why this statement is abominable but have also had our worst fears confirmed — that Trump's description of sexual assault is a dead ringer for the allegations multiple women have brought against him.

But, hey — there's always room for one more take, right?

In an apparent attempt to reclaim Trump's predatory comments, activist and entrepreneur Elizabeth Ariosto launched Grab Her By the Brain, an initiative speaking out against women's objectification. According to the site, the campaign's "ambassadors" have each chosen a charity to receive 10% of the proceeds from selling baseball caps thoughtfully embroidered with the slogan, à la Trump's ubiquitous "Make America Great Again" look.

English actor Gregg Sulkin tweeted out a photo of himself modeling the cap, calling the campaign "an initiative dedicated to empowering females of all age."

Nailing Trump on his despicable comments is certainly the right move. But calling for people to "grab her by the brain" misses the mark by a long shot.

The outrage behind "grab them by the pussy" had less to do with the body part and more to do with the implication of sexual assault. Though "grab her by the brain" is so nonsensical and physically impossible that it hardly warrants analysis, it doesn't hurt to wonder — why are we talking about "grabbing" women at all?

The group did not immediately respond to a request for comment.

Yes, it's tempting and in many cases A-OK to take Trump's sexist statements about women and subvert them ("Nasty Woman" t-shirts being a prime example).

But maybe let's all agree, as a society, not to do the same with boasts about sexual assault. Cool?