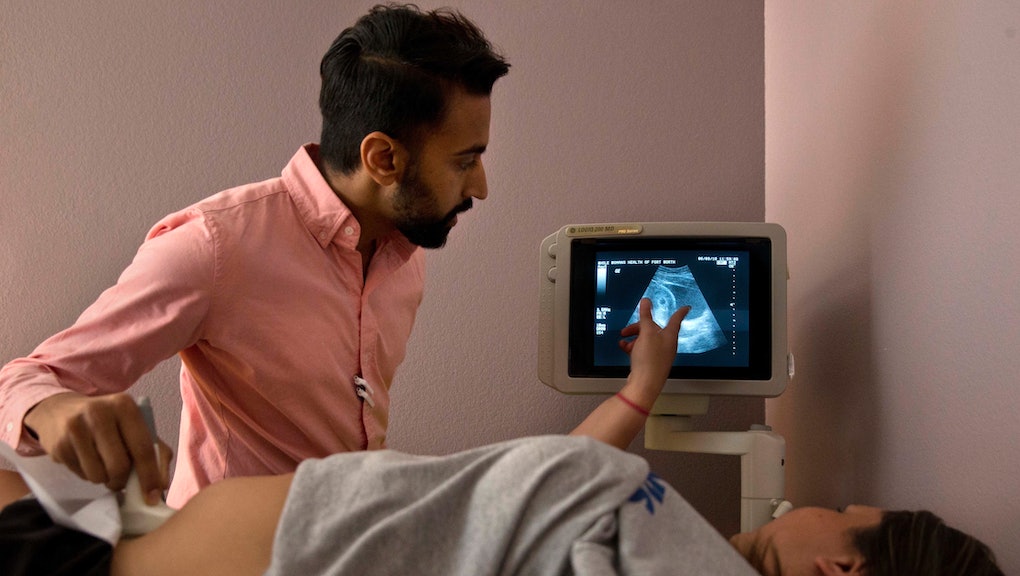 Republican nominee Donald Trump has a shaky record when it comes to his views on reproductive rights. Before his 2016 presidential campaign, Trump once identified as "very pro-choice," but throughout his candidacy has gone so far as to endorse "some form of punishment" for those who have abortions.

At Wednesday night's debate, though, Trump made at least one thing plain: He hasn't the faintest idea of what an abortion entails.

Trump exposed this blind spot when he attempted to justify his support for the overturning of Roe v. Wade, the 1973 Supreme Court decision guaranteeing the right to abortion, with a graphic — and inaccurate — description of the procedure.

"In the ninth month, you can take the baby and rip the baby out of the womb of the mother just prior to the birth of the baby," Trump said, going on to claim this horrific act can happen even on the "final day."

But he's got it wrong. While Trump grossly distorted the way any abortion is performed, he particularly misrepresented the experiences of people who receive them later in pregnancy.

"These statements are so far away from medical fact it's hard to interpret what he could have meant," Dr. Diane Horvath-Cosper, an obstetrician and gynecologist in the Baltimore-D.C. region, said Thursday.

"I think people say those kinds of extreme things to incite fear and anger when, in reality, every person who needs an abortion later in pregnancy has a unique set of circumstances that need to be taken on a case-by-case basis," she said.

Horvath-Cosper explained that most "late-term abortions" — a colloquial term people commonly use to describe abortions 20 or more weeks into a pregnancy — occur under extreme circumstances in which either the pregnant person's or the fetus' life is in jeopardy. Because the fetus' development kicks into high gear in the second trimester, it's typically around this time a doctor might discover a serious problem.

Such was the devastation of Judy Nicastro when she was pregnant with twins five years ago. At the 20-week mark, Nicastro's doctors delivered news that one fetus, who they called "Baby A," had only developed one lung, which was at 20% capacity. The fetus also had a severely herniated diaphragm, meaning the organs would eventually migrate upward through a gaping hole in the diaphragm.

"The likelihood of him living was very slim," Nicastro said over the phone. "If he were to survive, he would spend the rest of his life on machines."

Nicastro and her husband were faced with not one, but many, difficult choices. And it wasn't just Baby A's life hanging in the balance — the expectant parents had to think of his twin's wellbeing too.

A second-trimester abortion would entail aborting Baby A in the womb. Nicastro would have to carry the terminated fetus, which doctors said her body could reject at any point, causing her to go into premature labor. Going into premature labor could mean the difference between life and death for her healthy twin.

Hoping to ensure that at least one of the twins would live, Nicastro wondered about a third-trimester abortion. In addition to guaranteeing a safer delivery for the healthy fetus, Nicastro and her husband reasoned that this option would also reduce the suffering Baby A would endure. She asked her doctor if she could carry both to term and terminate Baby A at the end of the pregnancy, in utero, while he was comfortable in her womb, rather than gasping for air and dying on the delivery table.

The doctor informed her that, in the state of Washington, third-trimester abortions are illegal. The same goes for all but nine states and Washington D.C, according to a 2013 New York Times graphic.

Nicastro opted to receive a second-trimester abortion, which doctors performed by inserting a needle into Baby A's heart — not, mind you, by tearing him limb-from-limb, as Trump suggested. At 38 weeks, a healthy time for a baby to be born, Nicastro gave birth to Baby A and Kaitlyn, her now-5-year-old daughter.

"I'm still furious about it," Nicastro said. "We wanted both of those children desperately."

She continued, "People who are pro-life say their goal is to save a healthy child, yet I was forced to risk the life of the healthy baby to prevent the pain and suffering of the unhealthy baby. That law is actually anti-life."

As for Trump's "final day" comment, people seeking abortions generally aren't looking to delay their abortions to the very end of their pregnancies, Horvath-Cosper said.

"Most people who have abortions later in pregnancy would've preferred to have them earlier," she said. "Women don't just sit around waiting and decide later. They're receiving abortions at this time because there's no way they could've found out that something's terribly wrong with the fetus any sooner."

Alyson Draper, whose Facebook post about her own late-term abortion went viral Wednesday night, might have gotten the procedure sooner had she not had to wait 12 hours to hear back from an ethics committee in her home state of Utah on whether she'd be able to get it done it at all.

Draper had been carrying twins, one of which died in the womb and another that had severe spina bifida, an incurable neural tube defect which can result in a range of mental and physical disabilities. Carrying both fetuses to term would jeopardize her life, Draper wrote in her post, adding that she eventually had to think of her six children she would be leaving behind if she died.

She ultimately had an abortion by way of Caesarean section, with doctors removing the fetuses in their amniotic sacs.

"No woman should have to have the state have a say in the most painful decision she will ever make," Draper's post continued. "Nobody is tearing babies apart in late term. They are always humanely done, only in situations where there is a non-viable or severely defective fetus and/or the mother's health is at risk."

Comments as misguided and misleading as Trump's only seem to prove why the simple fact of a male politician legislating reproductive rights is as dangerous as it is ludicrous.

Donald Trump demonstrated, in [Wednesday] night's debate, that when it comes to abortion, he has no idea what he's talking about. As if his complete ignorance weren't dangerous enough, his policies would be a disaster for women's health and well-being.

In order to receive the best care possible, Horvath-Cosper said it's crucial for people to feel they are making the right choice, not the only choice — especially if they find themselves in the kind of extenuating circumstances that might necessitate a procedure like a second- or third-trimester abortion.

Horvath-Cosper said, "When we put restrictions on abortion we remove options from people when they need them the most."