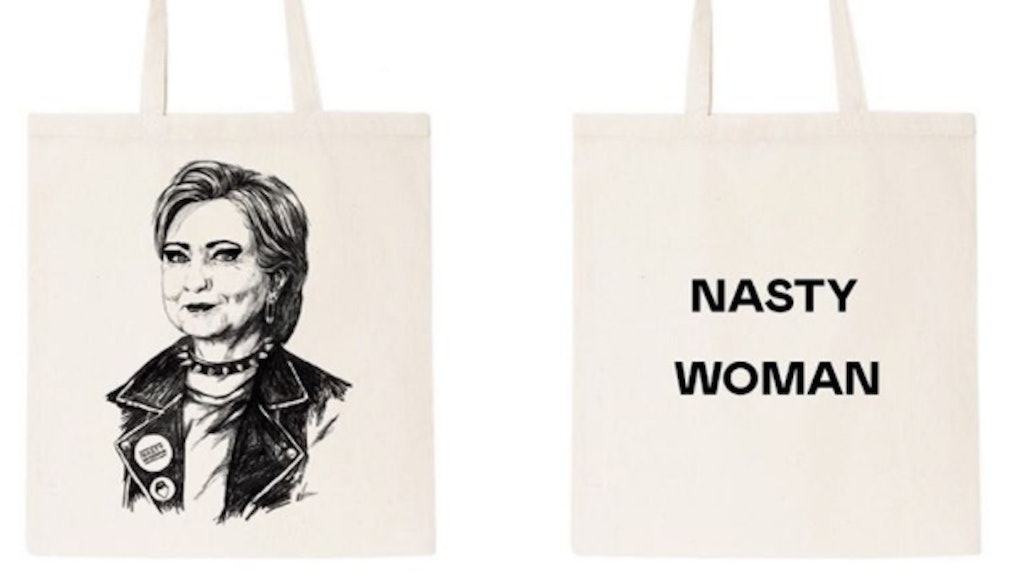 After Republican presidential nominee Donald Trump called his opponent Hillary Clinton a "nasty woman" on stage during the third and final presidential debate on Wednesday, many people were offended. They weren't simply angry at the name-calling (this we've come to expect), but at the hypocrisy that a man who says "nobody has more respect for women than I do," would use his final opportunity on the debate stage to make such an egregious remark about Clinton's character.

In the immediate, many took to Twitter to both embrace and voice pride in the title. "Nasty Woman is code for: intelligent, confident, hard-working, prepared, experienced," wrote one Twitter user.

And now, thanks to retailer Nasty Gal, women (or anyone else) can take what was intended as an put-down, and use it a clear sense of allegiance to Clinton. On Instagram, Nasty Gal founder Sophia Amoruso announced a "Nasty Woman" tote, coming soon to her band's website. One-hundred percent of proceeds will benefit Planned Parenthood.

If the comments section is any indication, when the tote does go on sale, it won't have any problem finding buyers. "Fucking dope!" read one comment. "Best. Idea. Ever." read another. The bag even proved its bipartisan appeal when one commenter wrote: "I don't like Hillary but this is a pretty awesome bag!"

And what couch is really one worth sitting on if it doesn't have a "such a nasty woman" throw pillow?

There's no better time than now to proudly display one's nastiness. So thank you, Donald Trump, for helping ideate such great merchandise — merch that will help benefit Planned Parenthood. We all know how much you love and support them, so this is sure to put a big smile on your face.