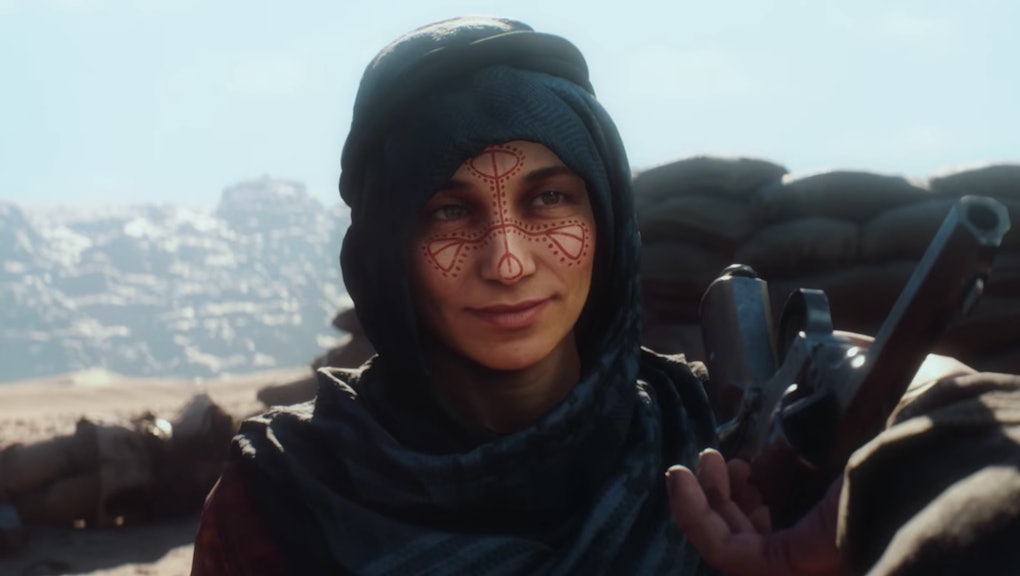 'Battlefield 1': DICE refuses to say whether female avatars are coming to multiplayer

In the 14-year history of the Battlefield series, players have never been able to play as a female character.

That changes Friday with the release of Battlefield 1, DICE's latest entry in the series, which features the Bedouin soldier character Zara in some of its single-player campaign missions. Unfortunately, its multiplayer mode remains a boys-only zone.

Battlefield 1 is an improvement — sort of

Battlefield 1, which centers around the events of World War I, features a compelling set of self-contained single-player campaign missions, called "War Stories." One of these vignettes focuses on the Bedouin soldier Zara, who serves as the right hand to Lawrence of Arabia in the Arab Revolt against the Ottoman Empire.

Unsurprisingly, this particular set of missions is where the campaign shines brightest. Not only is Zara herself the most compelling character of the bunch, but the structure of the missions — which emphasize a combination of stealth and first-person shooting — mix up the formula of the Battlefield franchise in a really fun way.

Unfortunately, that willingness to change up the conventions of Battlefield stops short of its multiplayer mode.

Despite being able to play as Zara in Battlefield 1's single-player campaign, it is still not an option to play as a female soldier in multiplayer.

In June, former DICE employee Amandine Coget took to Twitter to air her grievances about exactly that, saying the reason female characters had not been included was because it wouldn't be "believable" to the game's "core audience of boys."

DICE's alleged reasoning is baffling. Some of the most successful first-person shooters of the last few years prominently feature playable female characters: Overwatch, DICE's own Star Wars: Battlefront, and Call of Duty: Modern Warfare 3 are just a few that come to mind.

"Honestly, adding female soldiers to character customization wasn't about trying to lure more people into the game," Mark Rubin, executive producer on Call of Duty, told Joystiq when it added female characters to its multiplayer in 2013. "It was actually just about acknowledging the people who already play our game."

DICE's exclusion is especially strange in the context of Battlefield 1's multiplayer mode, which succeeds purely on its ability to heighten the otherwise horrifying nature of WWI to goofy, cartoonish heights, throwing any sense of realism out the window in favor of pure spectacle. For example, one of the weapons players can wield is the hilariously tiny — and, unbelievably, real — Kolibri pistol:

That's not to say that including women in Battlefield 1 would in any way be a betrayal of reality. Battlefield 1's own in-game codex, which provides historical context for the game's events, has an entire entry dedicated to the role of women in WWI.

DICE won't say exactly what the reason is for this exclusion. In an interview with Mic, DICE design director Lars Gustavsson said his company "tried to provide the best possible diversity in the game" through its inclusion of Zara in the campaign, but failed to explain why that diversity did not carry over to its multiplayer mode.

Here's what he said in full when Mic asked about the lack of female characters in multiplayer:

As a whole, we tried to provide the best possible diversity in the game, portraying the era both with the empires and kingdoms and within these different forces, different troops that fought alongside each other and get — with broad strokes — a good capture of what these forces were built upon. And, as such, we quickly saw that the female Bedouin was a good fit for the single player campaign.

So, will female avatars be added to Battlefield 1's multiplayer in the future? DICE was unwilling to say.

"That's too early to talk about to be honest," Gustavsson said. "Right now we are talking about the launch, which is here and now, and then [we will] start transitioning into working with the community and supporting the game moving forward."

The continued exclusion of female avatars is a huge disappointment, especially since 'Battlefield 1' makes so many other improvements to the series.

Game developers have come under fire in recent years for the exact same thing. For example, there was a huge backlash in 2014 against Assassin's Creed Unity developer Ubisoft, which said its game did not have any playable female assassins because it would have created "double" the animation work. In reality, according to Naughty Dog employee Jonathan Cooper, it would have taken only a few days to have a working female avatar, Polygon reported then.

That game's sequel, Assassin's Creed Syndicate, seemed to address this criticism by centering the campaign around two characters: Jacob Frye and his sister, Evie.

Needless to say, Battlefield 1's continued exclusion of female avatars is a huge disappointment, especially since Battlefield 1 makes so many other improvements to the series. For example, its single-player campaign, with its inclusion of several different characters from different countries, paints a nuanced, humanizing picture of WWI, going a long way to change the flattened, us-versus-them perspective so many other war games fall prey to.

It's a shame DICE's willingness to shake up the series' conventions stopped there.