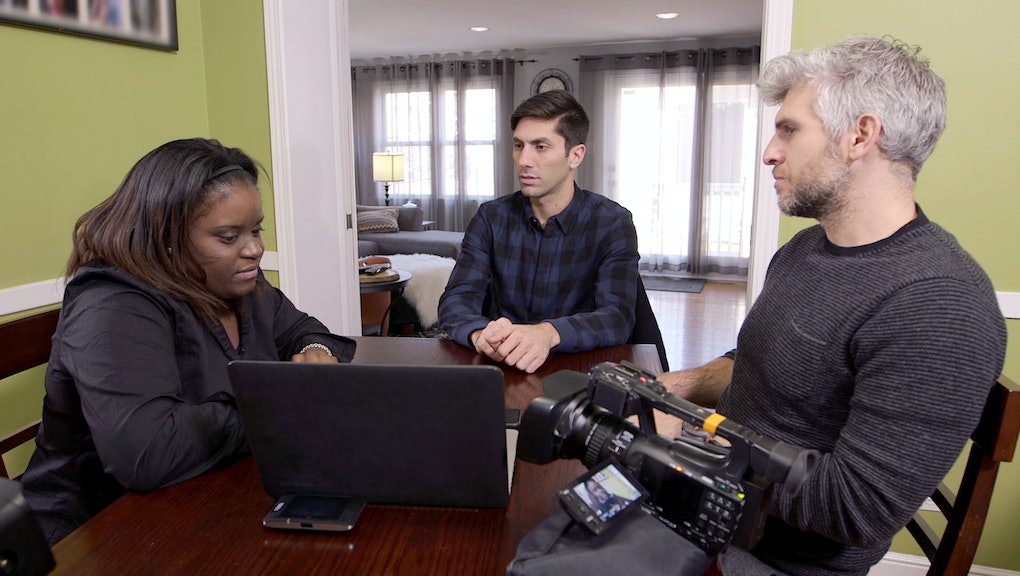 Brace for a shock: MTV's Catfish aired one of the best seasons of TV in 2016.

It's an odd idea to consider, yes. How could a dubiously produced reality show in its fifth season — a show that began as a brand extension of a movie — possibly be that high of quality? Isn't this the Golden Age of Television? Certainly Catfish can't compete with shows like American Crime, BoJack Horseman or Crazy Ex-Girlfriend.

Yet it does. Catfish season five is great TV that has escaped critical notice. And now that it's all available on Hulu, it's time to catch up.

When Catfish the documentary hit theaters in 2010, the film — directed by Henry Joost and Ariel Schulman — told a modern love story: one about meeting someone online, falling in love and wondering if that special someone could possibly be as great as it seems. But the film presented a dark twist: What if that person wasn't real? What if, in fact, the love interest had fabricated an entire family for themselves?

The movie's reveal that story subject Nev Schulman (brother of director Ariel Schulman) fell in love with a lie, propagated by a fake Facebook profile of someone named Megan and run by a real and lonely woman named Angela, was revolutionary for its time. Certainly it wasn't the first time someone had been duped by a fake online persona, but as a story, it was a contemporary horror that hadn't yet been depicted on-screen.

Then, in 2012, when Notre Dame football player Manti Te'o's deceased girlfriend turned out to be fake, Te'o referred to it as getting "catfished," and the rest was history. Suddenly, the term "catfish" was modern parlance. There was even an MTV reality show hosted by Nev Schulman (and co-created by Nev, Ariel Schulman and co-host and director Max Joseph) that helped make the word linguistic canon.

The show aired for four seasons and each episode had the same formula: Nev and Max assist a would-be victim of a catfish to learn their online connection's true identity, then help the victim come to terms with that truth. There were deviations from the format — like the episode where actress Tracie Thoms hunted down a superfan with a dubious story — but overall, it stuck to the formula.

(Editor's note: Some spoilers ahead for season five of Catfish.)

Said formula got really tired over the third and fourth seasons, leaving the show a hit for MTV that wasn't doing anything interesting creatively. To be fair, it wasn't that interesting in season one, either, but it was still fairly novel. Years into the show, however, it wasn't enough to try something different only once in a while.

Then season five premiered. It opened with an episode called "Dejay, Malik & Josiah" — unusual in and of itself, as there had never been an episode with three names in the title. Dejay and Malik are both being catfished by Josiah, who has told each different information about himself, even using a fake photo at first with Dejay (but later coming clean). The investigation into Josiah, a segment that in past seasons took up the majority of the episode, is short.

Instead, Dejay and Malik's confrontation with Josiah takes up the majority of the runtime. Nev and Max are floored when Josiah is exactly who he said he was, with most of the facts he told Dejay and Malik checking out. His problem is a lie he never technically told: He's been in a relationship for years, and he's not that sorry he deceived the two men.

It's this tiny twist that makes "Dejay, Malik & Josiah" so fascinating. The emotions are the same, but watching Dejay and Malik identify over being used by Josiah, then take him down consecutively, as Josiah reveals himself to be an unrepentant asshole? It's the kind of high-stakes, complicated drama the show couldn't quite manage before.

While there are certainly some more traditional episodes in season five, most break the mold in some way, shape or form. "Jeanette & Derick" features a daughter calling Catfish on behalf of her mother, keeping the emotional arc firmly set between mother and daughter. "Kayla & Courtney," an extended special, substitutes romantic connection for a woman claiming to be psychic and in contact with an 18-year-old girl's deceased father. It's easily the most emotional episode of the season — and one of the thorniest, since it doesn't provide an answer as far as how valid Courtney's gift is.

"Paris & Tara" is Catfish-as-mystery-novel, in which Paris, a bisexual woman, already knows she's being catfished. She has multiple suspects in mind who could be deceiving her. Then, one of the subjects (an ex-girlfriend named Mary) clears her own name, and puts suspicion back on Paris. She, Nev and Max go to meet the catfish practically blind — and surprise! It's Mary.

The twist is jaw-dropping, because if you're familiar with Catfish's format at all, Mary clearing her name is not to be disbelieved. Nev and Max believe her, so we all believe her. That's where Catfish season five really wins: by subverting audience expectations of the show to achieve a powerful payoff.

Moreover, Mary's motive ("Revenge," she says in perfect Emily Thorne style) is the kind of bald-faced absurdity that often got lost in Catfish's middling seasons. It also works because Paris is such a compelling hero — and indeed, Catfish found some fantastic protagonists in season five.

In addition to Paris, Dejay, Malik and Kayla, there are the phenomenal women (Jayme, Urszula and Sarah) at the center of "Lucas & Many." These three were all taken advantage of by a man seemingly lacking empathy named Zac, masquerading as a man named Lucas.

It turns out that Zac catfished around 400 women, keeping all their naked photos and videos, maintaining spreadsheets of how much they know about him, etc. Zac is something akin to the final boss of Catfish, and watching three of his victims team up to read him to filth is thrilling to watch.

Occasionally, the show still dips into its worst tendencies. Vince of "Vince & Alyssa" was a real monster who Nev and Max seemed to loathe by the end. His treatment of the women in the show — and the show itself — was the kind of villainy you don't want in a protagonist.

Worse even, "Spencer & Katy" featured a guy who thought he was dating Katy Perry. It's such a tragic episode that feeds, then crushes, Spencer's delusions, that it even solicited a response from the pop singer herself. Spencer was clearly in need of help, and Catfish preferred chuckling at his belief versus taking care of him in a profound way on camera. (Catfish does offer extensive off-camera counseling to anyone who appears on the show.)

These kinds of choices make it hard to champion Catfish as responsible television. For every good deed Nev and Max do (taking down Zac), there's an equal and opposite problematic episode. But even "Spencer & Katy" is hard to look away from. That's what's so fascinating: It's magnetic work.

Five seasons in, Catfish has figured out what engrossing, satisfying reality programming is. It's a shock to say, but Catfish season five is indelible, unmissable TV.