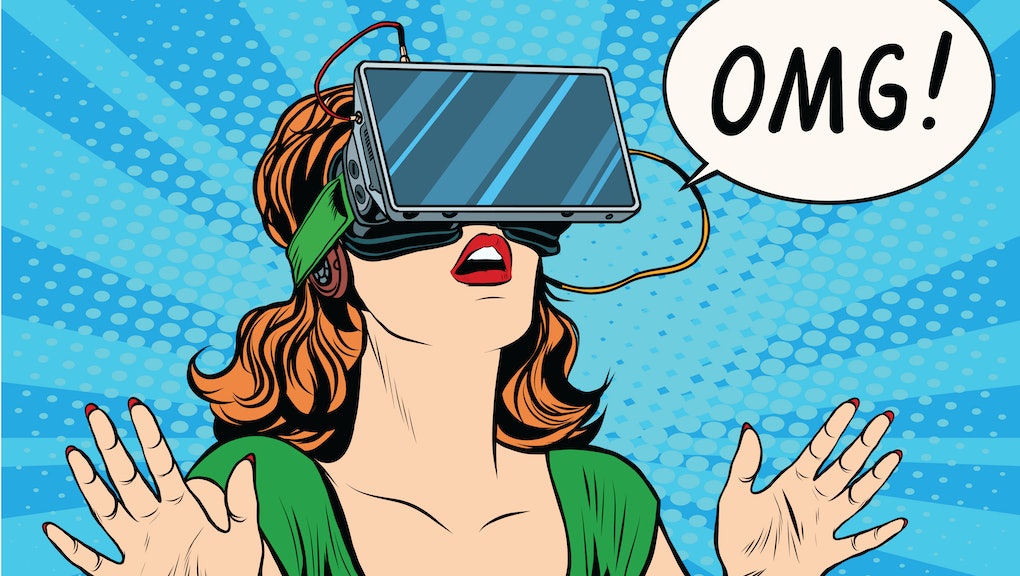 Last week I was groped in virtual reality. Did you know that could happen? I didn't, but now I'm all the wiser.

While visiting my brother-in-law last weekend, we decided to check out his HTC Vive, a virtual reality system. My husband and I stood in his home in Redwood City, on an idyllic 80-degree day, the three of us taking turns on the Vive.

It was my turn next. I glanced one last time around the room before strapping on the massive headset, and into a world more beautiful than I could have imagined.

Turning around 360 degrees, I reveled in the snowy medieval fortress of a game called QuiVr, where you play an archer shooting down the walking dead.

After some instruction, I found my groove with the gameplay. My bow and arrow strung taut, I let an arrow fly and it punctured a demon right through the skull. Nailed it.

Never had I experienced virtual reality that felt so real. I was smitten. I never wanted to leave this world.

To complete the reality of my experience, my brother-in-law directed me to the top of the highest tower in the game.

"Now walk off the ledge," he suggested.

Might as well try. I inched closer and closer to the edge, looking out onto a very convincing hundred-foot drop. My fear of heights started kicking in, strong. Closing my eyes, I took a single step off the ledge and... nothing happened. I didn't fall, and I was walking on air. I was a god. Virtual reality had won me over — lock, stock and barrel.

Or so I thought.

So, there I was shooting down zombies alongside another real-time player named BigBro442. The other players could hear me when I spoke, my voice the only indication of my femaleness. Otherwise, my avatar looked identical to them.

In between a wave of zombies and demons to shoot down, I was hanging out next to BigBro442, waiting for our next attack. Suddenly, BigBro442's disembodied helmet faced me dead-on. His floating hand approached my body, and he started to virtually rub my chest.

Suddenly, BigBro442's disembodied helmet faced me dead-on. His floating hand approached my body, and he started to virtually rub my chest.

"Stop!" I cried. I must have laughed from the embarrassment and the ridiculousness of the situation. Women, after all, are supposed to be cool, and take any form of sexual harassment with a laugh. But I still told him to stop.

This goaded him on, and even when I turned away from him, he chased me around, making grabbing and pinching motions near my chest. Emboldened, he even shoved his hand toward my virtual crotch and began rubbing.

There I was, being virtually groped in a snowy fortress with my brother-in-law and husband watching.

As it progressed, my joking comments toward BigBro442 turned angrier, and were peppered with frustrated obscenities. At first, my brother-in-law and husband laughed along with me — all they could see was the flat computer screen version of the groping. Outside the total immersion of the QuiVr world, this must have looked pretty funny, and definitely not real.

Remember that little digression I told you about how the hundred-foot drop looked so convincing? Yeah. Guess what. The virtual groping feels just as real. Of course, you're not physically being touched, just like you're not actually one hundred feet off the ground, but it's still scary as hell.

My high from earlier plummeted. I went from the god who couldn't fall off a ledge to a powerless woman being chased by an avatar named BigBro442.

There I was, being virtually groped in a snowy fortress with my brother-in-law and husband watching.

I wasn't as experienced a player as BigBro442. Everywhere I ran, he appeared beside me, ready to grope as soon as the zombie wave was over. I'd had enough. With a final parting obscenity, I yanked the headset off my face and stood back in the sunny, familiar room of my brother-in-law's home.

What had just happened? I hadn't lasted 3 minutes in multiplayer without getting virtually groped.

What's worse is that it felt real, violating. This sounds ludicrous to anyone who hasn't stood on that virtual reality ledge and looked down, but if you have, you might start to understand. The public virtual chasing and groping happened a full week ago and I'm still thinking about it.

Now that the shock has mostly worn off, I'm faced instead with the residual questions about the unbridled misogyny that spawns from gaming anonymity. It's easy to dismiss the most egregious offenses as the base actions of a few teenage boys, but I don't think it's as rare as a few bad apples.

How could it be, when my brother-in-law has played multiplayer mode a hundred times without incident, but my female voice elicited lewd behavior within minutes?

As VR becomes increasingly real, how do we decide what crosses the line from an annoyance to an actual assault? Eventually we're going to need rules to tame the wild, wild west of VR multiplayer. Or is this going to be yet another space that women do not venture into?

Women are allowed, sure, but the BigBro442s of the world will make sure you never want to come back.

Jordan Belamire is the author of the upcoming novel Swaying Magnolia, an adult f/f romance. This story was originally posted on Medium. Republished with permission.