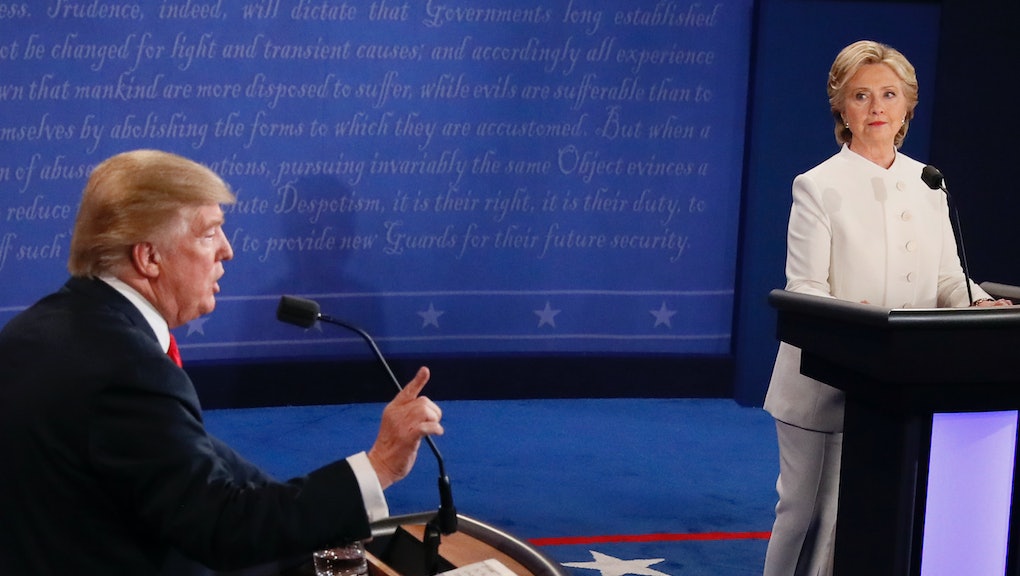 Don't worry: In 15 days and change, this election will be over — and according to forecast wizard Nate Silver, Democratic nominee Hillary Clinton is probably going to win it, although it's still too soon to know anything for certain. The presidential polls currently skew in her favor, though.

According to Reuters, Clinton has maintained a steady margin over opponent Donald Trump over the past week. Had the country cast its votes during that time, a Reuters/Ipsos poll released Saturday suggests, Clinton would have had a 95% chance of winning the electoral college and thus, the presidency. The Democratic candidate is ahead of her opponent in the states where it counts — the ones he would need to clinch the election, Reuters reported.

The FiveThirtyEight forecast is slightly — but only slightly — less optimistic in its assessment of the candidate's standing, reporting that Clinton has an 86% chance of winning, with about 340 electoral votes to Trump's 198. (A candidate needs 270 electoral votes to win the election.) She also enjoys about 50% of the popular vote to her opponent's 43%.

Trump's performance at the third and final presidential debate on Wednesday appears to have turned people off. According to an ABC News poll released Sunday, the decisive factors were Trump's treatment of women and his apparent refusal to accept the results of the election if he does not like its outcome. Of likely voters ABC surveyed, 59% do not buy Trump's assertion that the election is rigged and 65% disapprove of his cryptic suggestion that he might not concede the race to Clinton, if it goes her way.

By a 69-24 margin, respondents also disapproved of the Republican candidate's responses to questions about women and the many sexual assault allegations against him. "No one has more respect for women than I do," Trump's canned line of choice when it comes to defending his many transgressions, has apparently worn thin with voters.

According to RealClearPolitics' poll average, Clinton is roughly 6 percentage points ahead of Trump, the same lead she had going into the debate. If she maintains those numbers, according to Silver, she'll stick inside the "Obama zone" — the 4-to-7-point margin by which he won both his elections — and take the White House.