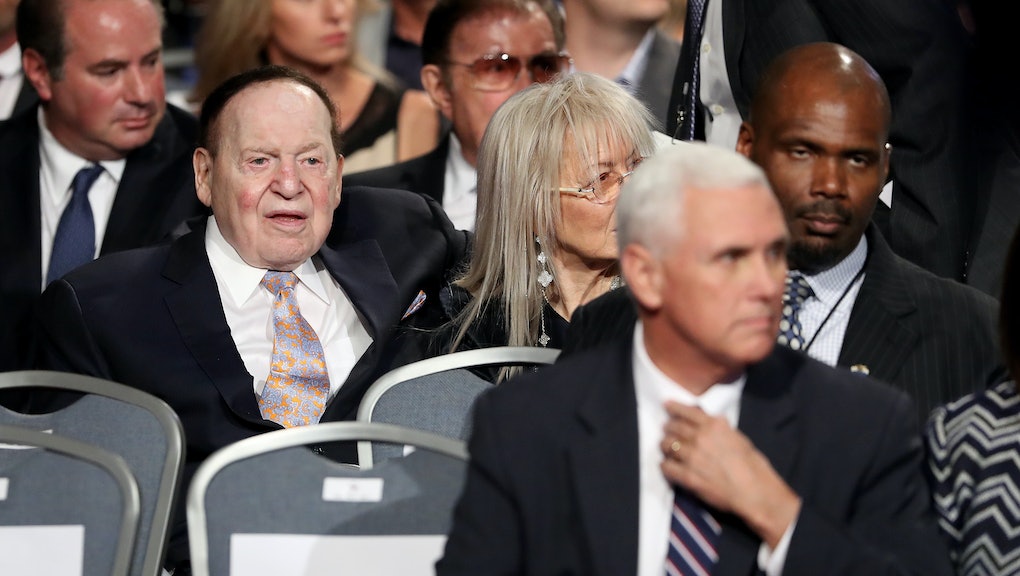 Republican presidential nominee Donald Trump, currently being assailed by a number of controversies including a 2005 video apparently capturing him bragging about sexually assaulting women, has received his first major newspaper endorsement of the year — from a paper that was recently purchased by right-wing billionaire Sheldon Adelson.

The Las Vegas Review-Journal penned a defense of Trump on Sunday, calling the real estate mogul the ultimate change agent and arguing "history tells us that agents for reform often generate fear and alarm among those intent on preserving their cushy sinecures. It's hardly a shock, then, that the 2016 campaign has produced a barrage of unceasing vitriol directed toward Mr. Trump."

Complimenting Trump's "corporate sensibility," the paper argued he would be an effective advocate for "lower taxes and a simplified tax code, in contrast to [Democrat Hillary Clinton's] plan to extract another $1 trillion from the private economy in order to enlarge the bureaucracy."

The Review-Journal also argued on Trump's behalf on the matter of upcoming Supreme Court vacancies, saying Clinton would appoint justices to rewrite "the First Amendment under the guise of campaign finance reform," roll back "the individual right to bear arms," and erode or outright dismantle the Fifth, Ninth and 10th Amendments.

While admitting Trump is not the most ideal candidate, the paper also borrowed a page out of the mogul's playbook, saying he would be "a source of disruption and discomfort to the privileged, back-scratching political elites for whom the nation's strength and solvency have become subservient to power's pursuit and preservation."

As the New York Times noted, the Review-Journal is boarding the Trump train virtually alone, with the biggest papers to date having endorsed Trump being "the Santa Barbara, Calif. News-Press and St. Joseph, Mo., News-Press." The only other paper of note to endorse Trump was the New York Observer, which is owned by his son-in-law, Jared Kushner.

All other major papers to issue an endorsement so far, including right-leaning papers like the Arizona Republic, Dallas Morning News, and the Cincinnati Enquirer, have endorsed Clinton.

According to Ballotpedia, the paper has endorsed solely Republicans for the presidency since at least the year 2000. But this year's endorsement in particular is likely to raise some eyebrows. Adelson is a well-known mega-donor to GOP candidates and causes — so much so that various Republican primary candidates attended private events with him this electoral season. Since he secretively purchased the Review-Journal for $140 million in 2015, the paper's staffers have accused Adelson of meddling in its coverage to further his interests.