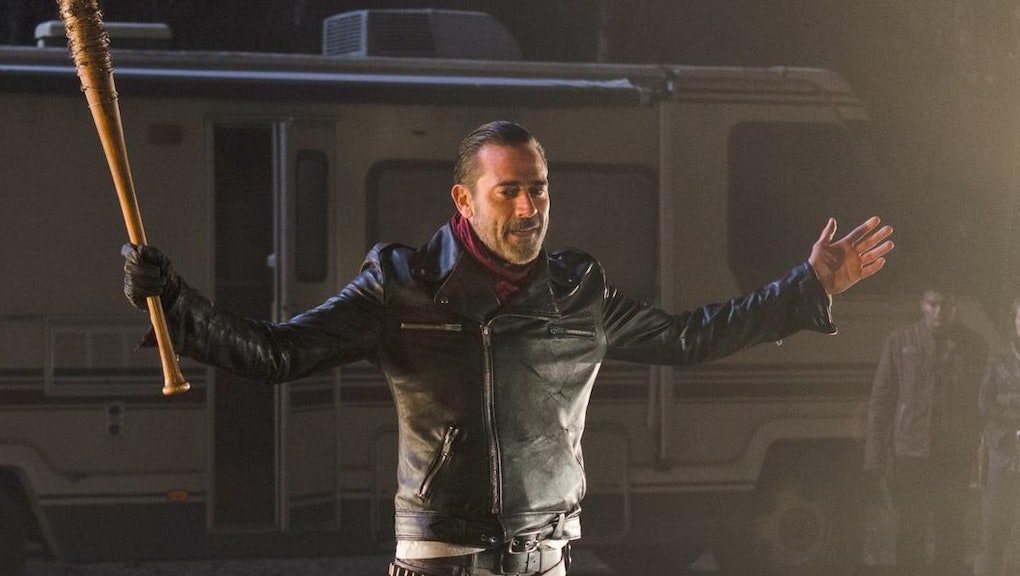 After six months of waiting after an excruciating cliffhanger, The Walking Dead finally revealed who was on the end of Negan's beloved barbed wire-covered baseball bat, Lucille, in the show's season seven premiere Sunday night. But was it worth the wait?

The show took a slight departure from the comic books, with Negan taking out Abraham after his unsettling game of eeny, meeny, miny, moe from the group lands on him. It's a gruesome sight, with Abraham's previous love interest (Rosita) and current (Sasha) looking on with anguish.

Abraham's death came shortly after the character met his end in the comics, as his comic book fate was doled out to Denise earlier in the sixth season. Therefore, some theories had stipulated that he would be a good candidate for the end of Negan's bat because he had (shortly) extended his on-screen shelf life. It was partly true.

As Negan kept whacking the remains of Abraham's skull with Lucille — all while taunting a distressed Rosita — Daryl jumped up from his spot in line and punched Negan in the face. Ballsy? Yes, and the fan favorite (who many viewers would likely riot over if he died) was poised to be the next victim of Negan's bat.

However, Negan opted to punish another member of Rick's crew in Daryl's place: Glenn. He's the one who is at the end of Negan's bat in the comics, and the sequence follows the same heartbreaking pattern as the source material. Glenn — after the first hit — tries to talk to his pregnant wife Maggie, but he's speaking incoherently on account of the near-fatal blow. In a flash, he's beaten to a pulp on the ground as well.

By that point, the Twitterverse exploded at the concept of not one, but two victims dying at Negan's hands in the premiere.

The real question, however, is whether the payoff was worth the wait — as many viewers were highly critical of how AMC handled the season six finale, and the show's general propensity for cliffhangers in its latter seasons.

The finale, and Negan's introduction, seemed like overkill for the tiresome cliffhanger trope. Glenn's death, in particular, lost a bit of weight after the series dangled his fate with a cheap fakeout in season six that literally involved a dumpster. Holding his fate — especially for any fans familiar with the comics and Glenn's iconic death — for half a year cheapened some of the dramatic weight of the premiere.

But while the choice to hold off the deaths of Abraham and Glenn was witless, The Walking Dead deserves some credit for its execution. The sequence is revisited through Rick's eyes, who is positioned near the center of the group that's lined up in front of Negan as he chooses his victims. Watching the scene unfold from his perspective, coupled with the tension of a second death shortly after Abraham's, was brutal and terrifying. The cast was similarly terrific: Jeffrey Dean Morgan's effectively steadies the sadistic nature of Negan with a touch of charisma, and watching Rick and the rest of the group process everything that happened to them was fittingly painful.

What The Walking Dead must prove now is that it can follow up its premiere with a compelling narrative — one that doesn't need to offer cliffhangers to goad its audience to tune into the next episode.

Back in April, showrunner Scott Gimple told media that the new season would be the "beginning of the next story." Whether it can bring The Walking Dead some life remains to be seen, but AMC has piqued our curiosity for at least one more week.