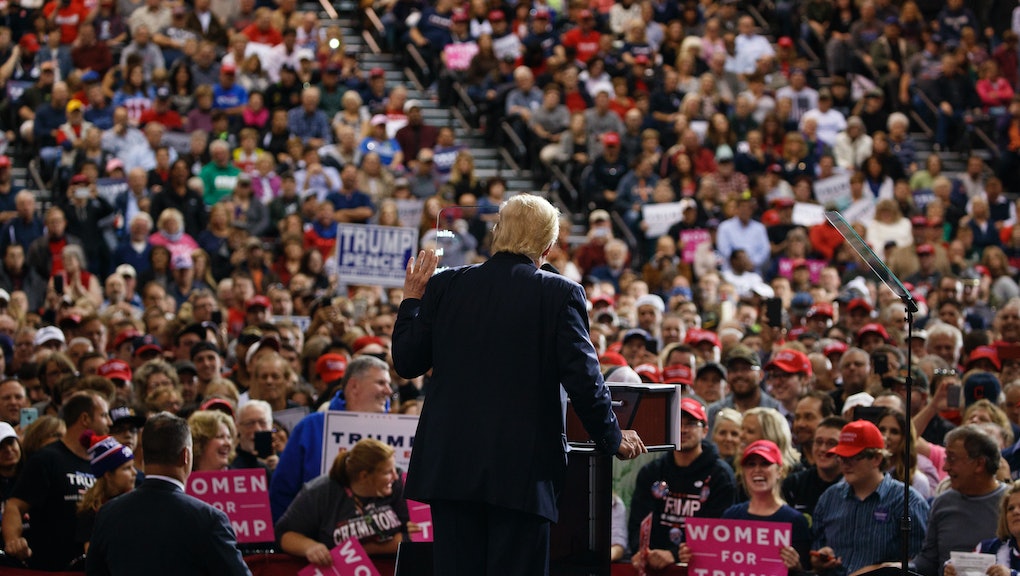 A letter about Donald Trump, from a black nephew to his white aunt

Last week, I wrote a message to my aunt, a Donald Trump supporter. For months, I'd watched her Facebook timeline devolve into a zoetrope of Obama-hating, "Hillary wants to take your guns away" conservative memes, and it seemed like a good time to address her directly.

"I don't want you to cast your vote without knowing how personal your support of Mr. Trump feels to me, and how painful it is to watch," I wrote.

My aunt is white, as was my father. They grew up in Apple Valley, California, a working-class town in the high desert between Los Angeles and Las Vegas. My mother, sister and I are black. My mom is the daughter of farmers from Georgia who settled in South Central during the late 1940s. My parents raised us in Los Angeles.

I hoped to persuade white aunt not to vote for Trump by appealing to one of our family's most painful shared memories.

As a child, I only saw my aunt once every few years, even though she lived less than a two-hour drive away. The last time we were in the same room was at my father's funeral 18 months ago. She still lives near her childhood home and works at a carpeting store. She raises Dachshunds and rides horses. I have fond memories of driving with my dad to local rodeo events as a kid to watch her compete, of her holding her horses by the reins as we climbed on their backs, guiding us through dirt parking lots while the other cowboys stared at us from their trailers.

My aunt and I are friendly, as I am with most of my dad's side of the family. She has shown nothing but love and affection toward my sister and me. But we are not close, and my relationship with her feels mostly incidental. I got married in May. She was invited but did not come, and I think we're both OK with that.

With less than three weeks until the election, trying to change her mind about her vote seemed futile but obligatory. Success hinged on an unlikely premise: that I could persuade her not to vote for Trump by appealing to one of our family's most painful shared memories.

In the late 1970s, my father announced to his family that he was going to marry my mother. My parents had been together for years, and until that point, his dad seemed fine with their relationship.

Which made his response all the more shocking. My grandfather wrote my dad a letter saying that if he married my mom, he would disown him. It's been years since my mom has seen the letter, but she remembers it well. If my dad married her, my grandfather reasoned, my father would have a harder time getting ahead in society — he would have no job security, fail to advance professionally and spend his life in bad neighborhoods.

"When Dad said he was still gonna marry me, his dad said, 'If you marry her I will disown you for life,'" my mom told me recently.

My parents married in 1979. True to his word, my grandfather disowned my dad. They spoke once or twice by phone thereafter, but never saw each other again. My grandfather died sometime when I was in high school.

There are versions of my grandfather in so many American families: people whose racism runs so deep it supersedes even their closest personal relationships. The contours of their prejudices vary. But their bigotry inspires solutions like those Trump has proposed, which entail treating outsiders like gangrenous appendages. Ban Muslims. Build a wall to keep out Mexicans. Disown your own son so you don't have to have a relationship with his black wife and children.

"[None] of us ever met our own grandfather while he was alive because he refused to have a relationship with us," I wrote to my aunt. "[We] were black, and our mother was black, and so we were not worthy of his time and love."

It's strange to grow up black in a family in which almost half your relatives are outspokenly sympathetic to — if not outright supportive of — Trump. For them, he wants to "Make America Great Again." For black people, he wants to flood our neighborhoods with armed police officers and stop and frisk us for weapons. He stokes fear toward black Americans by using dog-whistle calls to "law and order." He continues to spread the lie that black people perpetrate the majority of homicides against whites.

Trump's view of the world resonates with many of my cousins. They write "Black Lives Matter is racist" on Facebook and complain about those who "play the race card." They claim the current civil rights movement against police brutality is promoting violence against whites.

The Trump-loving masses seemed worthy of condemnation outright, but my aunt was someone I could reason with, and whose mind I might be able to change.

To this day, my relatives on my dad's side are some of the only Republicans and Trump supporters I know. It's hard to believe he came from the same bloodline. He married a black woman, raised black children and spent his life leading racial justice initiatives in church and the community. Yet his father flat-out disowned him rather than see him with a black family. Today, his sister backs the most openly racist presidential candidate in recent memory.

In an op-ed two weeks ago, I wrote that racists like my grandfather should be "shamed out of public life." Divisiveness in this election, I argued, has been good: The emergence of Trump's racist supporters provides a chance to reaffirm the social norm that racism should not be brooked in the public sphere.

The Trump-loving masses seemed worthy of condemnation outright, but my aunt seemed like someone I could reason with, and whose mind I might be able to change. I hoped to convince my aunt that the love she had for her black niece and nephew was incompatible with voting for Trump, who has built his political platform atop fears of black lawlessness. If nothing else, it felt necessary to confront the still-taboo subject of racism within our family for the first time with her.

My dad had no patience for this kind of contradiction. His moral stubbornness was part of what made him so good. It's one of the things I miss most about him. But part of me is glad he's not alive to see this election. It might shatter whatever hope he had left for racial progress in America.

"I see a lot of your father in Donald Trump," I wrote to my aunt, "When you express support for [him], it says to me that you support his policies — policies that are, frankly, violent against members of your own family."

I was surprised the next day when I saw her response in my inbox.

She explained that she "may not vote for Trump," but could never bring herself to vote for Hillary Clinton — that many of President Barack Obama's policies had harmed her and her loved ones personally, and that they were a prime reason why the country has been such a mess these last two decades. She didn't want four years of the same.

It's striking how easily people can separate their support for an openly racist political platform from their own prejudices.

She insisted she harbored no racial animosity — that at the end of the day, her family was more important to her than any political disagreements we might have.

"I am not a racist and never have been," she wrote. "I love you, [your sister] and your mother. I hope you understand my position, and we can agree to disagree, but also still love each other no matter what ... Hugs and love to you."

It's striking how easily people can separate their support for an openly racist political platform from their own prejudices — as if you can vote for a candidate whose main schtick is bigotry and still believe yourself to be anything but a bigot.

I don't know everything that's in my aunt's heart. I know my aunt loves me, and I know she loves my sister. She is kind. But nice people can still be racist. There are plenty of nice people calling for Central American and Syrian refugees to be expelled from U.S. borders. There are nice people shouting "Blue Lives Matter" at black protesters. There were nice people who supported Jim Crow.

I know that if my aunt and I weren't related and she saw me on the street, the same fears peddled by Trump would be in the back of her mind. I might be a danger. She might be OK with me getting stopped, frisked and detained for her protection.

"I will think about what you said" is not a disavowal, and "I might not vote for Trump" is far from a victory. But I'd like to believe my aunt read my message and thought about the world differently, if only for a moment.

Maybe she'll vote for Trump. But maybe she won't. That sliver of possibility won't solve everything, or sound the death knell for Trump's campaign. But it's something.