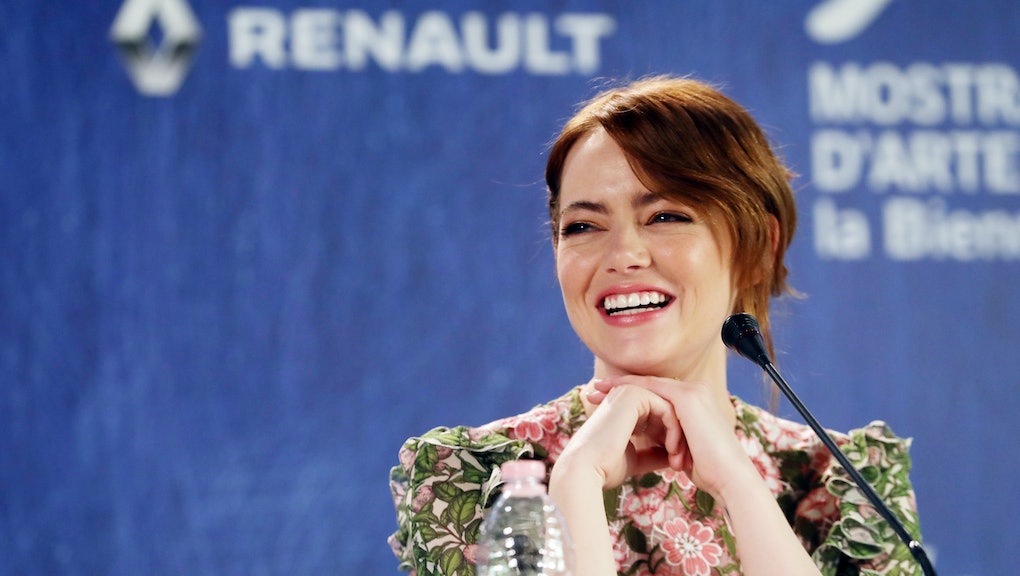 Emma Stone, like many a celebrity throughout the 2016 election, has been vocal in her support for Hillary Clinton. But rather than just vocalize her allegiance — as she did in the pages of November's Vogue, announcing her unequivocal support for Clinton — Stone is using fashion to make a pointed statement.

More specifically, by attending the Middleburg Film Festival donning a pussy bow, or as her stylist stylist Mara Roszak, called it in her Instagram caption, Stone's "don't grab my pussy bow" blouse.

The onetime innocuous accessory, a popular style of neckwear that takes the form of a bow, has taken on a less glamorous second life after Melania Trump, the wife of Republican presidential nominee Donald Trump, wore not one but two pussy bows to the 2016 debates.

Though the female Trump looked expectedly glamorous —as she has been wont to do long before her husband ever began moonlighting as a politician — the timing and intent of the accessory were called into question as just days before the second debate saw the leak of the now-infamous #TrumpTapes in which Donald is heard telling former Today host Billy Bush that, because of his fame, he can "do anything," not limited to "grab[bing] [women] by the pussy."

Stone's statement pussy bow, along with the Hilary 2016 pin fastened to her clutch, shows that for her (and for many) this election isn't just about getting Hillary into the White House, but equally about keeping Donald Trump out.