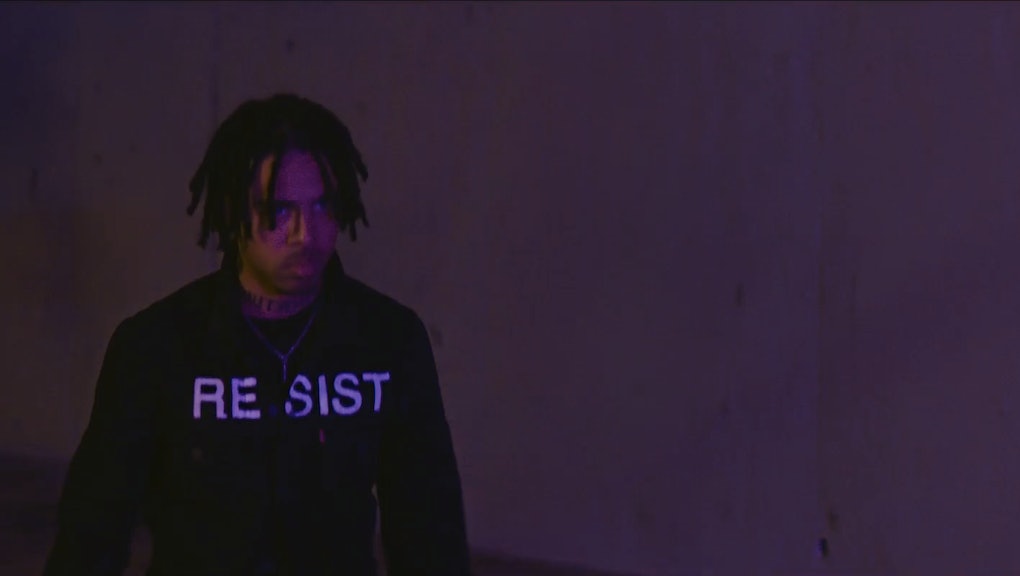 It's been two years since Chicago Police Officer Jason Van Dyke fired 16 bullets at Laquan McDonald. It's a moment that Vic Mensa, a native Chicagoan rapper, doesn't want the world to forget.

In his latest video for "16 Shots," Mensa avenges the young black teen with a powerful and harrowing visual for "16 Shots," a song from his politically charged EP There's Alot Going On. In it, Mensa acts out a tragic Luke Cage-esque fantasy, where police violence can't silence or suppress his will to resist.

In the video, which debuted exclusively on Tidal, Mensa dons a black jacket with the word "RESIST" across its chest and walks through a deserted alley where he's confronted by police.

The scene quickly cuts away for a short second to a striking image of the dangling legs of a lynched corpse hanging, before jumping back to three police men attacking the Chicago rapper with batons.

He's later tasered and shot. Each time Mensa gets up unscathed.

Yet the final moments of the visual are perhaps the most haunting. They include an emotional interpretive dance with cutaway dash cam footage on the night of Oct. 20, 2014 when McDonald is seen walking on Chicago's Pulaski Road, one lane width apart from police vehicles. As McDonald spins to the ground and gunfire smoke rises from his body, Mensa's dancer spins the same.

"This record is like self-defense," Mensa said of the record in an interview with Ebro Dardan on Apple Music's Beats 1. "Because to me, Laquan McDonald represents Emmet Till, which represents every name down the line and since then a lot of things have changed, but one main thing [that] hasn't changed is that our lives are not respected."

Like his mentor Kanye West, 23-year-old Mensa has a no-holds-barred approach to his words, fashion and music. He's been at the forefront of anti-police brutality activism in Chicago. When footage of McDonald's death was released to the public in November 2015, Mensa rushed into Chicago's streets in protests until he "got hands put on me by police," as he tweeted, a description he later said was inaccurate: "fighting police."

"Rap music, in my mind, is the art form with the biggest potential to incite global change," Mensa said in a February interview with Billboard. "It spans so many different races, colors, creeds, ages, nationalities. It's really come to a point where it's so global and there's so many people listening that if you give them something that can actually help them while they're listening it's the best way to get messages across."

Mensa refuses to call himself a conscious rapper, but that doesn't mean his music doesn't speak volumes. His might not always be the easiest videos to stomach, but when black death makes headlines weekly, monthly, yearly, they're confronting the issues that matter.

Watch Vic Mensa talk about policing and police brutality as a part of Mic and Spotify's Clarify series: