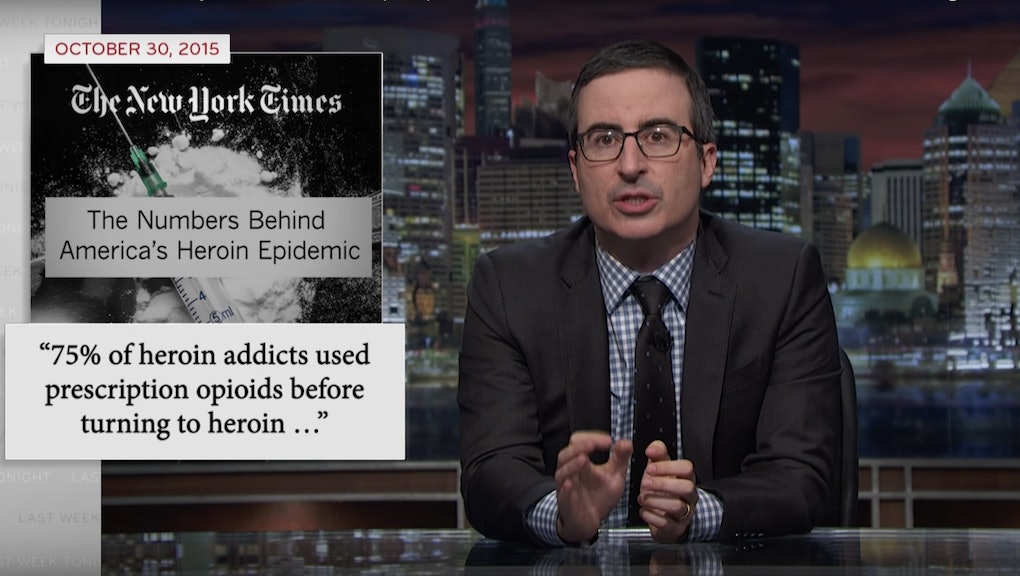 Lest we forget, during an election that seems focused on tired memes, offensive sound bites and terrifying Halloween costumes — in the end, there's a country that needs to be run. And that country has a big issue that calls for swift action: opioids.

That's why on Sunday John Oliver opened Last Week Tonight with a roughly 20-minute insight into not just America's opiate addiction epidemic, but Big Pharma's role in creating it, too.

"Tonight we're going to look at one of the major causes of this crisis: prescription painkillers, which are chemical cousins of heroine," Oliver explained. "Around 75% of heroine users started with a prescription opioid — drugs like, Oxycontin, Vicodin and Percocet."

In 2009, generic and brandname Vicodin was the most prescribed drug in America. By 2012, more than 250 million pain killer prescriptions were being written annually, according to the Centers for Disease Control and Prevention. That's enough to supply every adult in America with a bottle of pain killers.

This wasn't a problem until the '00s, Oliver expounds. Opiates were so tightly controlled up until the late '90s that not even stage 4 cancer patients were prescribed them for palliative pain relief.

But an aggressive — and misleading — campaign by Big Pharma helped precipitate a paradigm shift, first encouraging the use of opioids for dying patients and, then, for lesser problems like back pain and arthritis.

The dangers of addiction were grossly underrepresented by Big Pharma and its influence was too great, Oliver said:

A nuanced discussion between the medical community about the complexities of pain treatment is clearly important: The problem is that discussion became dominated by the pharmaceutical industry, who started amplifying the message that opioids should not just be used for acute pain, like that from cancer or surgery, but for all sorts of pain, like arthritis and backaches — which makes sense as a motive coming from the pharma industry. End-of-life pain care is a narrow business; it's hard to make a lot of money off of a product exclusively marketed to people who are close to death.

The overprescription of these drugs opened the door for wider opioid addiction, resulting in some patients turning to heroine, for example. Over- and lethal-doses of opioids have soared in recent years.

The vast majority of the approximately 50,000 lethal drug overdoses in 2014 were from opioids. And in August, there were 27 heroine overdoses in the span of 4 hours in a single town in West Virginia. Overall, more than 2 million Americans have a substance abuse problem with prescription opioids.

Some drug companies were held to account for their lies about opioids. Purdue was fined $634 million in 2007 and, the following year, Cephalon was slapped with $444 million in fines for pushing drugs like Actiq, a fentanyl-based painkiller and opioid.

Oliver does not end on a grim or despondent note, however. He offers a multi-pronged approach to the problem. These include huge investments in treatment plans for existing addicts, tightly controlling opioids — reserving them for only those who are truly in need — and making sure health insurance plans cover pain treatment alternatives like mindfulness and physical therapy.

"It is hard not to be angry at the drug companies — like Purdue — whose promise of cheap, quick, easy pain solutions helped put us in this fucking mess," Oliver says in an impassioned conclusion. "Because while they may not be solely responsible, if you were to ask me if they bear significant blame for reckless, greedy behavior, which contributed to this massive public health crisis, I might not say, 'yes' exactly, but I would definitely say 'uh huh.'"