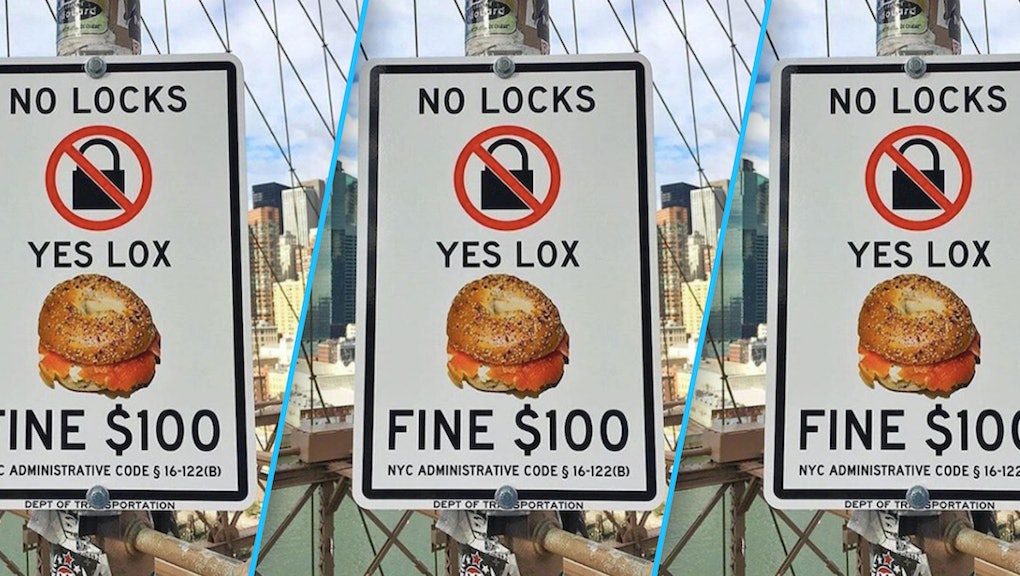 No locks, yes lox: The story behind the brilliant new sign on the Brooklyn Bridge

In New York City, a bagel with schmear, the city's signature breakfast bread product, is the one ring to rule them all. Now, everyone's favorite carbohydrate is prominently featured on a cheeky new Brooklyn Bridge sign that was posted in October.

The sign reads "NO LOCKS YES LOX" and features an everything bagel with lox (aka smoked salmon). It sits atop the Brooklyn Bridge promenade, which 4,000 pedestrians use each day, according to the NYC Department of Transportation. The sign's goal: to discourage Brooklyn Bridge visitors from affixing "love locks" to the landmark and remind them it could earn them a fine of $100. (Think of how many bagels you could buy with that kind of dough!)

Local and visiting lovebirds have been attaching "love locks" to the famous bridge as tokens of affection, but the small gesture has some weighty consequences. On Sept. 8, the locks caused a wire holding a light to snap, a DOT spokesperson said in a phone interview, explaining that the one of the Brooklyn-bound traffic lanes had to close for a few hours for repairs. The city had to cut off around 11,000 locks last year. So much for everlasting love, huh?

Brooklyn isn't the only city suffering from an influx of love locks. Visitors often fasten locks to the Pont des Arts in Paris, the Ponte Milvio in Rome and several other European bridges. But locks and bridges just aren't a good combination — a section of fencing on the Pont des Arts in Paris started collapsing, causing city officials to clip off the locks in 2015, CNN reported.

It's not entirely clear when or where this tradition began. The International Business Times traces the romantic locks back to 2006, when an Italian novel featured a couple that fastened a lock to a famous bridge in Rome before throwing the key into the river.  Meanwhile, the Huffington Post reported the practice allegedly began after a couple broke up during World War II and women in the town of Vrnjacka Banja, Serbia, put padlocks on local bridge to ensure their relationships would not suffer a similar fate.

If you give a bridge a bagel...

If there existed a perfect bagel, it'd be the humble roll that graces the Brooklyn Bridge's new sign. The photo evokes the perfect chewy texture and soft, bready interior that bagel lovers dream of. And of course, it's covered with everything seasoning (dried garlic and onion, poppy seeds, sesame seeds and salt) and has pinkish smoked fish peeking through the schmear-laden bread. The visitor that doesn't stop in their tracks and want to speed walk to the nearest deli after seeing this sign has much to learn about the Big Apple.

Leo's Bagels, a deli located near the New York City DOT's offices in the Financial District, supplied the everything bagel and lox for the sign, a DOT spokesperson said, noting the bagel was photographed so assiduously, it was inedible after employees were done with it. A true bagel martyr.

"I didn't think we'd actually put a bagel on a city sign," John Jurgeleit, who oversees the NYC DOT's Maspeth Sign Shop in Queens, said. Jurgeleit has been making signs for NYC DOT for more than 20 years, and his shop makes between 85,000 to 100,000 signs a year. "Every sign you see in the five boroughs, that comes out of my shop."

"We did regulatory signs and then [city officials] wanted something a little more whimsical," Jurgeleit said. "As a goof, I came up with this and sent it over and our [Transportation Department] commissioner, who has a great sense of humor and a love of signs also, she loved it — she went with it.... to my surprise."

Jurgeleit noted that two other signs remind visitors to leave no trace on the bridge. One sign says "No locks, no earphones" to deter people from tying headphones on the bridge, and the other says "Love not locks."

But the bagel is the runaway hit, getting lots of attention on Instagram and Twitter. "I'm glad it gets recognized," Jurgeleit said. "The Brooklyn Bridge is an amazing structure, there shouldn't be anything to deface it."