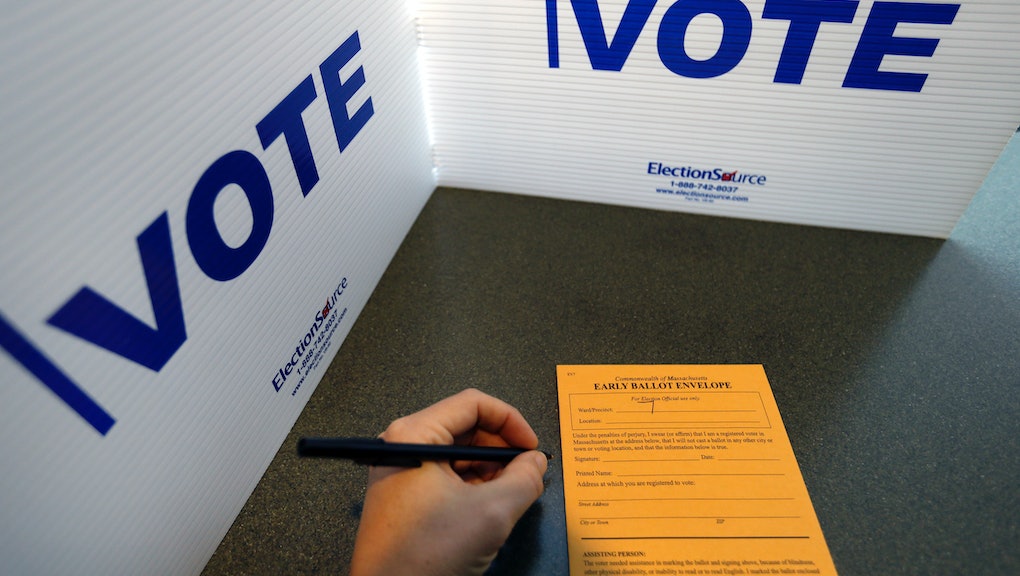 If you've seen a Facebook image saying you can vote online by tweeting the name Hillary, we're sorry. As convenient as online voting would be, this is a hoax. Feel free to write Clinton's name on Facebook with the hashtag #PresidentialElection Nov. 8, but it won't do anything.

In a wildly unsurprising plot twist, the photo originated on a 4chan forum popular among pro-Trump alt-right trolls, as Mashable pointed out. It's an effort to get Clinton supporters to throw away their votes.

Where the online voting hoax came from

It first appeared on a 4chan thread in July. The original post asked Bernie Sanders supporters if they are voting for Trump or "for the most corrupt, backstabbing politician in recent history."

The hoax image was posted in response. It's a ploy to lose Clinton votes by getting unassuming supporters to "vote" for her in an unofficial fashion, like a tweet.

A thread in pro-Trump subreddit /r/The_Donald titled "4chane is doing the lords work [sic]" shows users galvanizing to circulate the meme in an effort to trick Clinton supporters.

One user suggested that they post the meme in /r/politics the night before the election. Another said that they should keep it hidden and then "spammed like crazy one or two days before election day."

"Flood social media with this the day of the election," another user agreed.

So you'll likely start seeing this image surfacing on Facebook and Twitter as we near Nov. 8. Don't fall for it.

Let's get one thing straight about online voting: It's not real.

You can't vote online — not yet. And you sure as hell can't vote by posting on social media.

"My take is it's going to probably be decades before we've made enough progress on just fundamental computer security problems before we can offer the same security with online voting that we expect today from paper ballots in a polling place," J. Alex Halderman, a professor of computer science and engineering at the University of Michigan, told Motherboard.

This isn't the first time Trump supporters have turned to "meme magic" to hinder Democrats' support. In May, a meme circulated on Tumblr that prompted Bernie Sanders supporters to make Bernie glowsticks. The directions, if followed correctly, actually produced a deadly chlorine bomb.