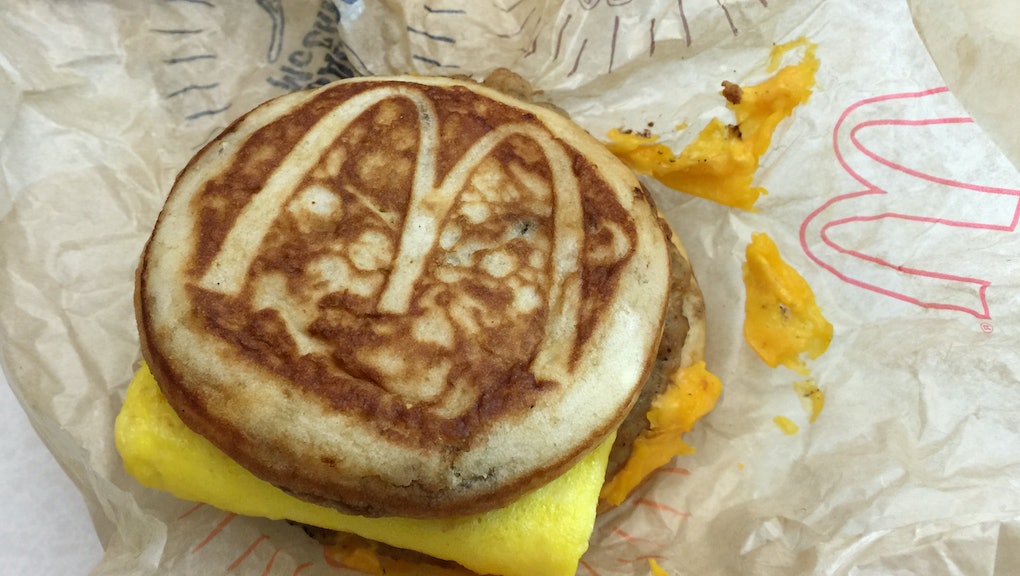 McDonald's all-day breakfast has essentially saved its business, as well as plenty of hungover fast food lovers who can't get up to obtain a McGriddle until early afternoon.

But is serving McGriddles and hash browns all day really great for diners? No, not really. McDonald's employees took to Reddit to explain why satiating your egg and cheese cravings in the afternoon may not be the best idea at their restaurant.

On a September 2016 Reddit thread titled "fast food employees of Reddit, what shouldn't we order?" past and present McDonald's employees didn't hold back on their suggestions to restrict breakfast orders to the morning hours.

"Breakfast foods get rotated out when lunch comes around and may have to be made on the spot," Reddit user cieyx wrote. "It takes time and is a huge inconvenience to the kitchen since they have to skip ahead and the come back to your order after whatever you ordered is ready." So while most people are ordering McNuggets and Filet-o-Fish, you're messing up the flow of the afternoon service. And you don't want to mess with fast food employees. Sneeze McMuffins are (maybe) a thing...

"At my McDonald's we have to make Eggs and Muffins fresh for every Egg McMuffin," user elfalas echoed. "Not a problem during breakfast, but during lunch it's a bitch and a half with all the orders coming through."

While fresh food may be worth waiting for, not every McDonald's operates in the same way and some late in the day breakfast items may be just sitting there, waiting for the one pathetic soul who orders eggs and sausage long after lunch or dinner would be more appropriate.

Stale McMuffins in your future?

"The muffins will be stale, the eggs will have been there for 30 minutes and the sausage patties could've been there for anywhere between 15 minutes and three hours," user nicehotcuppatea wrote. "Hash browns stay frozen and sell fairly quickly all day. Hot cakes are refrigerated and microwaved to order, unless it's super busy, when they'll be stored under the microwave for fast access."

That's right: Microwaved. Not made on a griddle, like the name McGriddle might lead you to believe — not even fried, which is most of the point of eating fast food. Aren't you just better off heating up your own breakfast Hot Pocket than ordering breakfast at McDonald's in the p.m.?

Consider just following McDonalds worker MilkQueen's advice and not ordering anything from the breakfast menu during lunch:

"No one likes making it, it's too much hassle and time sink, you're probably getting labeled as a special snowflake, also the shit is super old, so we're just throwing shit that was cooked five hours ago into the microwave for the one person that wants a mcgriddle this late. You can probably taste the hated [sic] that went into it."

Tasting the hate makes that late night McGriddle so much less appealing. And just so we're clear, all of this is being cooked in a microwave.

"And yes, it is a microwave," MilkQueen wrote. "If you ever hear someone back there yelling, 'it's in the queueing oven' it's cause we're not allowed to say microwave anymore. It doesn't even take that long in the microwave, we just make it take longer out of spite." One spite-and-hate-nuked Egg McMuffin, coming up!

Maybe just stick to a 24-hour diner, where any two eggs your way are cooked to order, with bacon.