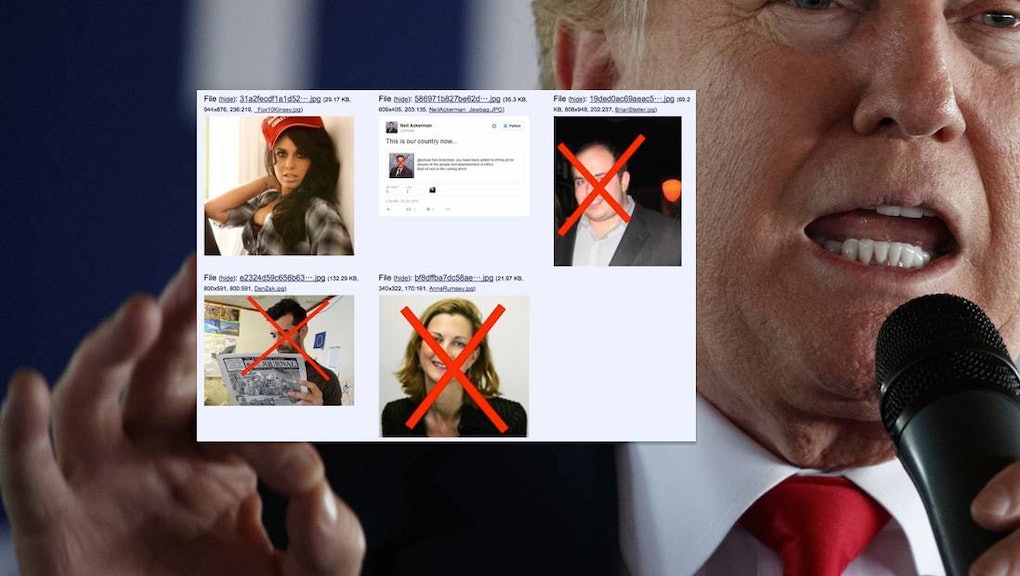 The alt-right — a squadron of young, rabid Donald Trump supporters — is in full-on panic mode. Their U-boat is flooding with water, but instead of drowning with the ship, they're unleashing the torpedoes.

Their target is the media — journalists they accuse of rigging the election, an unproven claim borrowed from Trump himself, by pushing a pro-Clinton agenda and spreading lies about the Republican presidential candidate. At a Trump rally in Cleveland on Saturday, supporters railed against the media by chanting "Lügenpresse" — a 200-year-old German phrase meaning "lying press" that was used as a Nazi rallying cry.

Early Monday morning, the Nazi call made its way to Twitter. Trump supporters singled out journalists by scrawling a red X over their faces and telling them they'd been added to #TheList for "their crimes against the American people."

The raid began on 8chan's /pol/

In a now-archived thread titled "RAID TIME," an anonymous organizer advised, "Watch the lists below for a constant stream of Lügenpresse shilling. Wait one of them to speak out against Donald Trump, for Hillary Clinton, or other forms of Kikery. ... Sit back, enjoy tears."

They hoped journalists would freak out when targeted, wary of being singled out for further harassment and abuse. The organizer called it a psy-op. "No violence," they warned. "Just add them to #TheList and let their minds do the rest."

Timestamps on 8chan posts showed they worked all through the night and into the morning, compiling names and tweeting red X's at journalists.

The operation has since spread to /r/The_Donald on Reddit, where users are organizing their own list of "crooked journalists."

"Their guilty conscience will eat them up inside," one user said. "The lying press have completely abandoned their journalistic duty to objectively report the facts so Democracy can function. Sad!"

The Nazi terminology and the call to survey for "Kikery" should be a dead giveaway: #TheList, like many of the alt-right's operations, is inherently anti-Semitic. It plays into the age-old conspiracy theory of Jewish collusion to control the world's powerful elite.

For months, the alt-right has been attacking the media, focusing intently on Jewish writers. In June, Mic investigated the (((echoes))) symbol, a triple parenthesis used to identify Jews on Twitter and signal fellow anti-Semitic trolls to harass them.

Several Jewish reporters made #TheList. One reporter targeted was Politico's Hadas Gold, who herself is no stranger to anti-Semitic harassment. Last week, a self-proclaimed Trump supporter sent Gold a doctored photo of herself with a bullet hole in her head and a Star of David on her shoulder.

"Don't mess with our boy Trump or you'll be first in line for the camp," the anonymous user told her in a direct message. "Line up by the wall. #Trump2016."

Many folks on Twitter refused to take the bait, making fun of #TheList by targeting random objects like Hot Pockets and toilet paper, BuzzFeed reported.

A real threat lurks behind the trolling

Of course, it's all fun and games until someone gets hurt. What seems like mere online trolling can have severe real-life consequences — particularly when sensitive personal information is being shared on the web. Anti-Semitic hate incidents increased 3% from 2014 to 2015 — with violent assaults skyrocketing 50%, according to data compiled by the Anti-Defamation League.

Online harassment is "as real as any type of harassment," Oren Segal of the Anti-Defamation League told Mic in June. "Some people are lucky just to get abusive tweets."