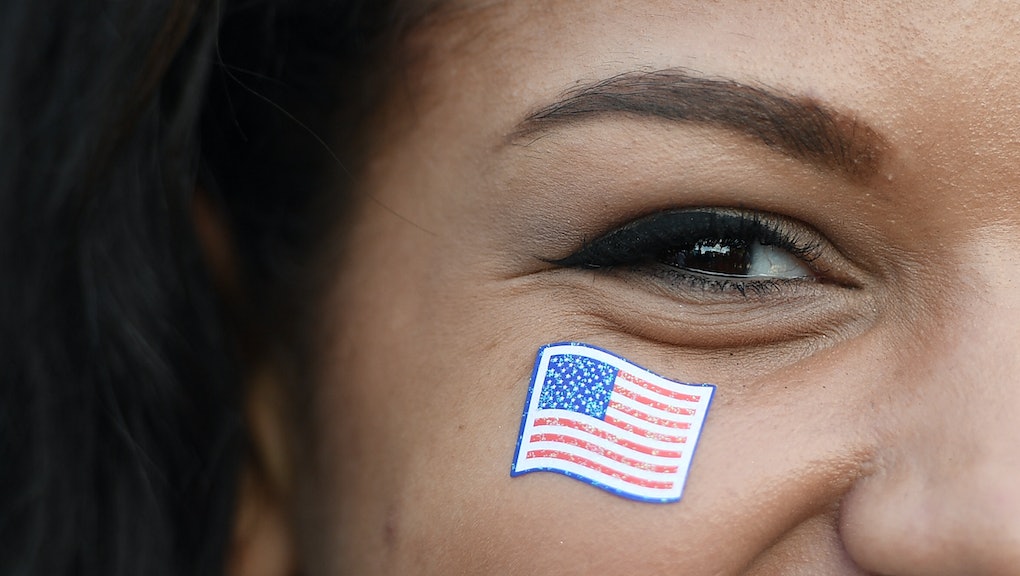 Join us for The UnConvention: an ambitious multiplatform initiative to engage millennials in meaningful civic conversations during this year's election season.

A real-time Electoral College tracking map suggests not only a disappointing Election Day for presidential hopeful Donald Trump, but potential trouble down the road for the Republican Party he represents.

A Mic sneak peek at a new interactive map from SurveyMonkey, which goes public at 9 a.m. Tuesday, shows Democrat Hillary Clinton ahead not just overall in Electoral College projections, but with an overwhelming advantage among millennial voters.

A total of 270 Electoral College votes are required to capture the presidency.

In the 2016 election cycle, 69 million millennials are eligible to vote — a number equal to that of baby boomers.

According to SurveyMonkey, which is offering mapping based on more than 30,000 interviews conducted since Oct. 8 and weighted by state-level voter demographics, Clinton dominates among the younger set.

"The data among millennials point to big and widespread advantages for Clinton heading into the final stretch. The challenges some Democrats feared she might face with young voters after a tough primary fight against Bernie Sanders haven't materialized," Jon Cohen, SurveyMonkey's chief research officer, said to Mic.

"Looking beyond 2016, the numbers among white millennials may be particularly troubling for Republican strategists," Cohen said, pointing to data that backs up longstanding fears about the future of the GOP in the absence of a successful effort to broaden its base.

"Trump is ahead in only 17 states among young white voters," Cohen noted.

"In addition to the headwinds the party faces among nonwhite voters of all ages, this deficit adds to the party's obstacles ahead."

After a scorching post-mortem conducted after Republican Mitt Romney's loss to President Barack Obama in 2012, the GOP made some effort to ramp up its outreach to nonwhite voters.

Apparently not helping achieve that goal: Trump's hardline stances on issues such as immigration and his much-questioned conduct toward women, coupled with GOP resistance to de-emphasizing wedge social issues such as abortion and marriage in order to attract next-generation Republicans.

In 2016's battleground states, according to data SurveyMonkey provided to Mic ahead of the full map release, the GOP may also be looking at trouble down the road as its base ages out — unless the Trump phenomenon is a total aberration.

In Florida, for example, the RealClearPolitics polling average shows Clinton up just under 4 percentage points overall. However, SurveyMonkey shows Clinton up 24% with millennials, with a double-digit advantage even among those without a college education.

The RCP averages for Ohio show the candidates in a dead heat, with Trump slightly ahead. But SurveyMonkey has Clinton up by 13% among millennials there, leading in every demographic except among men, where the candidates are in a statistical tie.

And in Iowa, where RCP averages show Trump ahead by under 4 percentage points overall, Clinton bests the Republican among millennials by about twice that figure.

All that said, older voters have traditionally voted in higher numbers as a group than their younger counterparts for an array of reasons, so pre-election poll results don't necessarily guarantee final outcomes. And there's no question 2016 has been an unusual presidential cycle, to say the least, which has strained the utility of a lot of conventional political wisdom.

These new Electoral College test cases with millennials are a product of the shareable SurveyMonkey map's options to view state-level results in key brackets such as gender, age, race, income and education level.

The SurveyMonkey data will be updated daily through the Nov. 8 election. When the GOP will next dramatically update its play for new, younger voters remains to be seen.