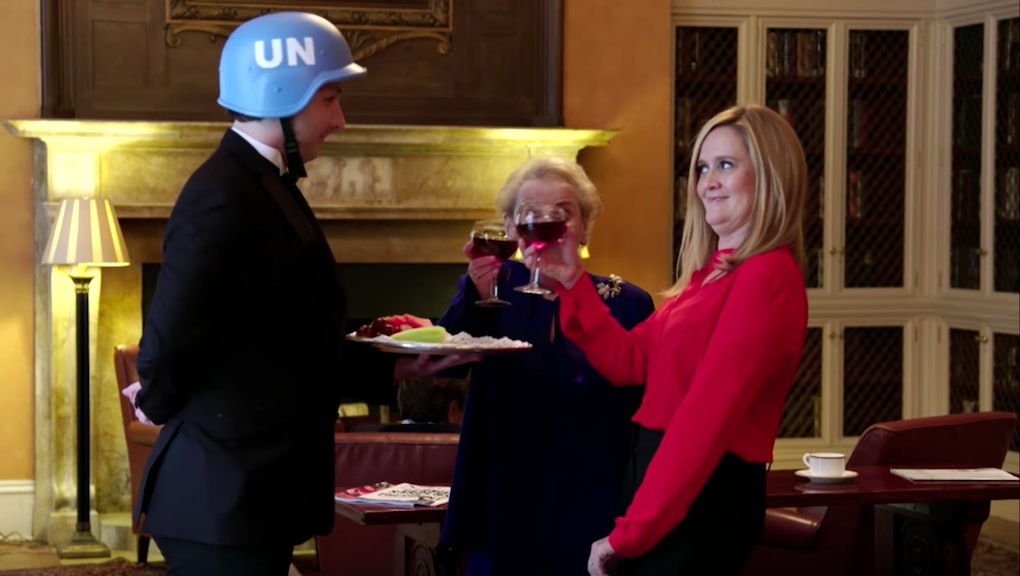 Donald Trump calling Hillary Clinton a "nasty woman" in the waning moments of the third presidential debate has become symbolic of the misogynistic criticism aimed at Clinton during the run-up to the election.

So to get an idea of what Clinton could face if she is elected, Full Frontal host Samantha Bee went to the United Nations to talk with prominent "nasty women" politicians, starting with former Secretary of State Madeleine Albright. Albright led Bee to what appeared to be a woman's bathroom, only for it to reveal itself as a secret lounge complete with bookshelves and prompt maître d' service from UN lackeys.

There, Bee asked Albright about why some men aren't comfortable with the notion of a female leader, to which the former secretary of state called out Trump with a not-so-subtle dig.

"Why are men afraid of women?" Albright posited. "I think we're seen in whatever previous relationship they have had — like the third-grade teacher that told Johnny to be nicer. Or Donald."

To get an idea of what current female world leaders have to deal with, however, Albright suggested that the comedian speak with prominent politicians at the UN, so Bee spoke with Norwegian Prime Minister Erna Solberg, Chilean President Michelle Bachelet, Croatian President Kolinda Grabar-Kitarovic and Marshallese President Hilda Heine.

When Bee chatted with Grabar-Kitarovic, the president noted that a lot of the images that surface when she googles herself are bikini shots at the beach.

"It makes you feel like an object," she explains.

What's more, the photos aren't even of her. In at least one instance, it's American dancer, model and web personality Coco Austin. So Austin comes on to clear the air.

Ultimately, Bee and Albright conclude, progress will be made when girls can view positions that women hold (such as Albright's former position as secretary of state) as clichés, rather than outliers.

"'Do something that impresses me, grandma,'" Bee quips, imitating Albright's granddaughter.