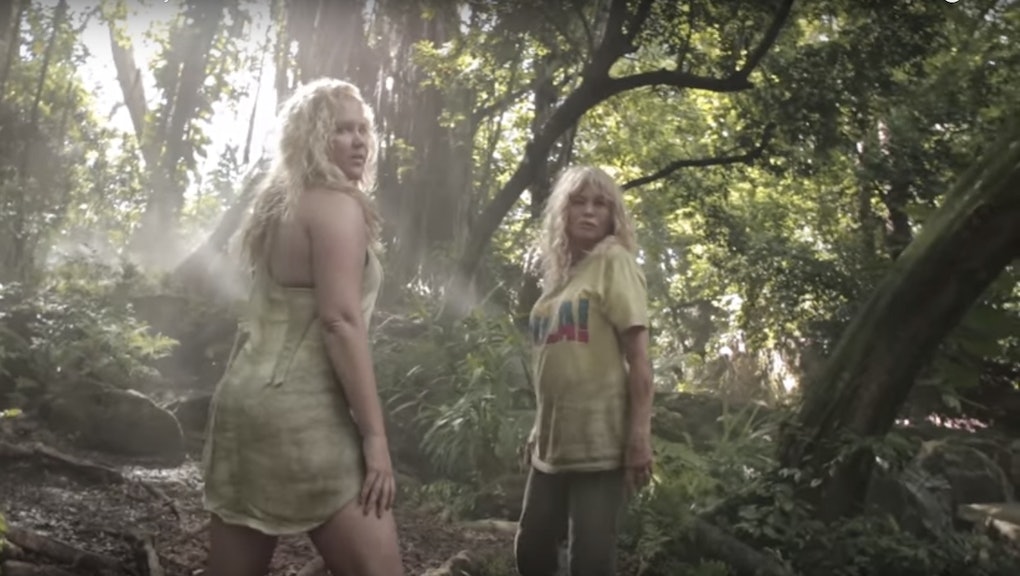 Ahead of their new film Mother/Daughter, co-stars Amy Schumer and Goldie Hawn decided to do something completely unnecessary: shoot a parody of Beyoncé's "Formation" while on set in Hawaii.

According to the Huffington Post, the video debuted on Tidal, of all places, on Friday, where non-subscribers could only see a 30-second teaser for what Twitter users are calling a veritable train wreck.

Activist Feminista Jones led the charge against Schumer after tweeting out a video of herself watching the video — in complete horror — on Sunday.

"Amy and Goldie covered themselves in dirt, gyrated awkwardly and just lip-synched over Beyoncé," she wrote, recapping the video in a later tweet. "It was trash, lol. It's that simple."

It's certainly hard to tell what Schumer was going for. Aside from the obvious references to the original "Formation" video, Schumer's own additions are baffling at best. Spliced between shots of Schumer and Hawn — joined by Joan Cusack and Wanda Sykes — are cutaways to a goat, a chihuahua and a group of Hawaiian women Schumer somehow recruited to her cause.

When they aren't dancing in a forest, mall or portable toilet, Schumer and Hawn take to flipping off a bull and a table of produce. Makes sense.

Various outlets, Mic included, have dubbed the video a "parody" — but according to Jones, it's a misnomer. Schumer neither changed Beyoncé's lyrics nor presented any new take on the song, unless "bizarre" counts. Aside from the dubiousness of a white woman parodying a song with explicit references to the Black Lives Matter and black power movements, Jones said Schumer's video simply lacked any imagination.

Jones summed up her thoughts on the video and her feelings toward Schumer with the hashtag #AmySchumerGottaGoParty. There was a pretty solid turnout:

This backlash comes only a little more than a month after the last Schumer drag, prompted by the actress' defense of Kurt Metzger, an Inside Amy Schumer writer known for making rape jokes. In an interview with pal Lena Dunham, Schumer maintained that Metzger was no "Bill Cosby," and dismissed him as an "internet troll" while lamenting that she had to answer for him. The same week, Schumer was caught deleting a tweet that claimed men of color are more misogynistic than white men.

Given all of these infractions, Jones couldn't help but wonder if Schumer is a mere parody of herself, intentionally trying to spark controversy for some greater social commentary. Well — probably not.

"I think Amy has been satirizing white feminism for years as experimental performance art," Jones wrote. "Or at least I want her to be that creative."