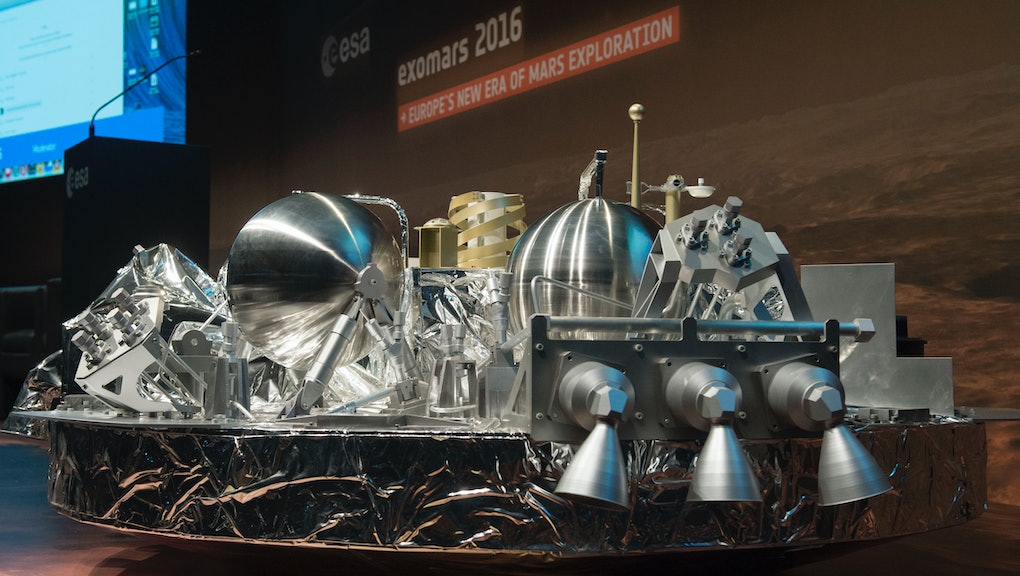 The latest Mars mission just hit a snag, and it may have been a computer glitch

As if the Schiaparelli lander's mission to Mars wasn't tough enough, now it sounds like a computer glitch may have sent the poor thing to its death.

Schiaparelli's leg of the European Space Agency's ExoMars mission was supposed to be a peaceful, six-minute descent to the surface of the Red Planet. Instead, according to the journal Nature, information Schiaparelli sent to its mothership showed a premature ejection of its heat shield and parachute. Shortly thereafter, landing thrusters were engaged, but only for three seconds — one-tenth of their programmed time — before they switched off, sending the craft plummeting to the planet.

But the data showed Schiaparelli thought it was already on the surface, which explained why it had already turned on its data-collecting instruments.

"My guess is that at that point we were still too high," said Jorge Vago, project scientist for ExoMars, according to Nature. "And the most likely scenario is that, from then, we just dropped to the surface."

Schiaparelli fell freely from roughly two miles in the air, falling at a rate of almost 200 miles per hour. Based on images taken by NASA's Mars Reconnaissance Orbiter, the crash was pretty bad.

The possible glitch in question may have caused trouble with sensor data coming together, Nature reported, leading the lander to assume it was actually already on the ground at the time it fell. Fortunately, it sounds like the problem was software-based.

"If we have a serious technological issue, then it's different, then we have to re-evaluate carefully," Andrea Accomazzo, ESA's head of solar and planetary missions, told Nature. "But I don't expect it to be the case."

Schiaparelli was only the first portion of the ExoMars project, a joint effort between the ESA and Russian Space Agency Roscosmos. After Schiaparelli's leg, the next stage, planned for 2020, is to send a rover and a scientific station on Mars. The mission, helped by Schiaparelli's data, is to drill into the planet's surface and search for signs of ancient life. Fortunately, there's a silver lining to the wreck: Schiaparelli still sent data home, leading ESA Director General Jan Woerner to call the mission a 96% success.

The snag means more work for the ExoMars crew, since they probably expected to celebrate a calm landing, not run batteries of computer simulations to look for the glitch. But the mission will continue on: Schiaparelli's sister craft, the Trace Gas Orbiter, is already in orbit around Mars, preparing to look for biosignatures in the Martian atmosphere that would indicate life.