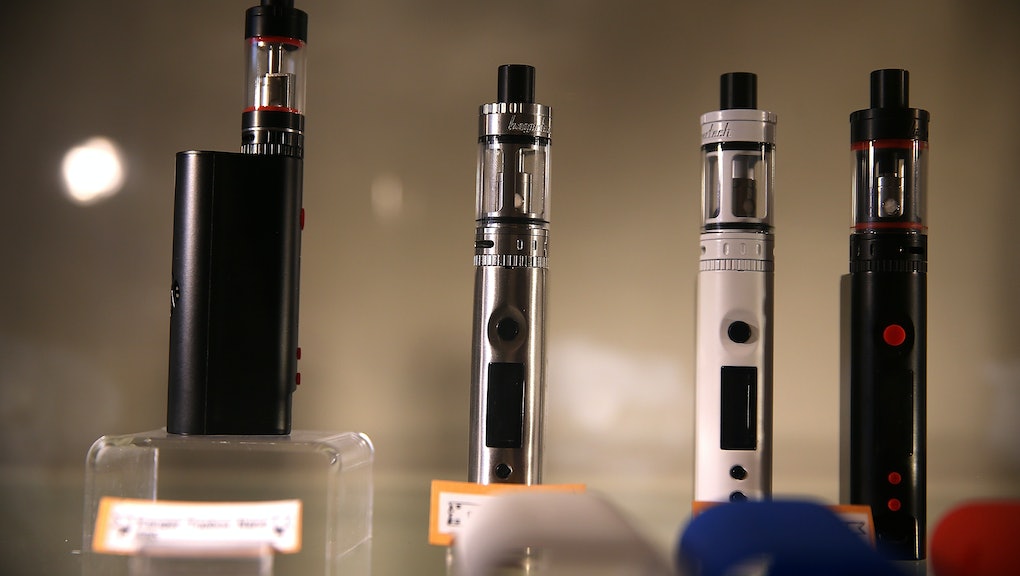 If you want to quit smoking cigarettes but fear the likelihood of gaining weight, scientists have a little tip for you: Why don't you vape, bro?

In a study published this month in Nicotine and Tobacco Research, titled "Could vaping be a new weapon in the battle of the bulge?," scientists from New Zealand and the U.K. looked into reducing the cause of one high-cost disease (tobacco smoking) without leading to another (obesity).

Can vaping help you lose weight?

Nicotine's effect on the brain and metabolism can reduce weight gain, and the habit of smoking can act as a behavioral alternative to eating. The authors of the study note that the expectation of gaining weight after quitting smoking dissuades many from kicking the habit.

The scientists explore how switching to e-cigarettes with nicotine and flavors is a viable alternative to tobacco smoking, and less detrimental than excess weight gain.

"People can change their nicotine content, so to quit smoking they might start off on a higher-strength e-liquid and then they can taper down really quite gradually in a much more sophisticated way than they can with NRT, which is probably good for weight maintenance and for weight loss," co-author Linda Bauld, professor of health policy at the University of Stirling and deputy director of the U.K. Centre for Tobacco and Alcohol Studies, told the Guardian.

The researchers note that this strategy isn't for everyone — it's aimed at people who are already smoking tobacco and who want to quit, but who are afraid of gaining weight.

Bauld also told the Guardian that the variety of e-cigarette liquid flavors could help prevent snacking, and that the actual process of filling the cartridges could act as a behavioral alternative to eating.

"You are refilling the e-liquids, you might be mixing your own liquids, you are trying different flavors, you are doing things with your hands that take up time, which means maybe you are not reaching for the bowl of M&Ms," Bauld told the Guardian.

Don't ditch your workout for a vape just yet

While this tactic aims to be a lesser of two evils — vaping versus obesity — the strategy echoes the early ad campaigns from Big Tobacco.

Take this Lucky Strike ad from 1929: "To keep a slender figure no one can deny, reach for a Lucky instead of a sweet."

The authors admit that much more research is needed, the Guardian reported. Paul Aveyard, professor of behavioral medicine at the University of Oxford, warned that there is some evidence that nicotine intake can lead to diabetes.

"That balance between the two effects is not known," he said.

Arguably, the healthiest advice is to reach for a pair of running shoes instead of a vape.