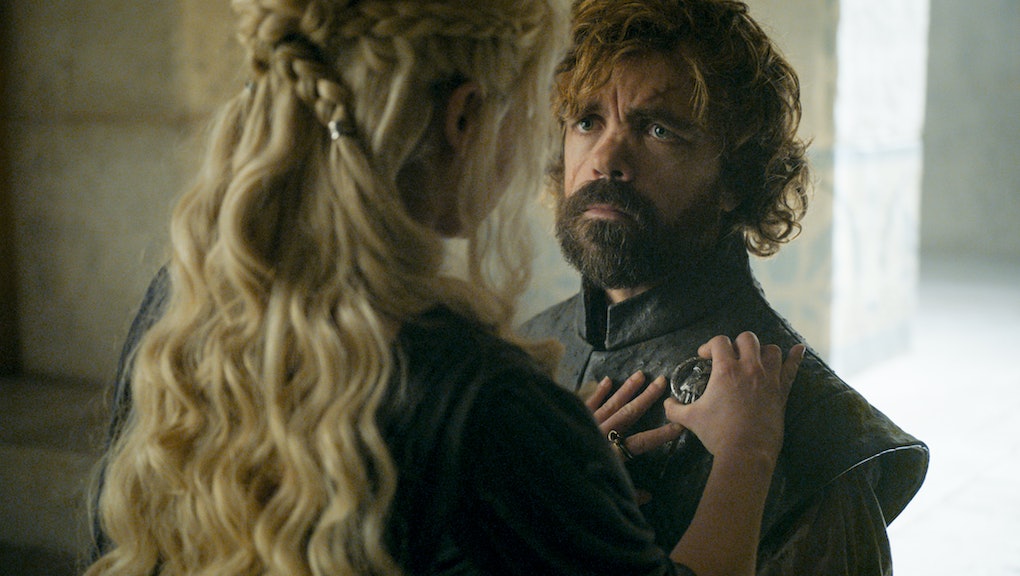 As Game of Thrones inches closer to its endgame, with two shortened seasons left before we bid adieu to Westeros, the prospect of encounters between important characters who have yet to meet on-screen seems likely. If the early set photos from season seven are any indication, we'll be treated to one of the most exciting of such pairings to date.

As noted by the eagle-eyed members of Game of Thrones fan site Watchers on the Wall, it appears Jon Snow and Daenerys Targaryen will finally meet face-to-face at a location that bears some likeness to Dragonstone. This makes sense, since Daenerys is currently sailing toward Westeros. Geographically, a pitstop in Dragonstone — a place that is also hers by right as a Targaryen — would make sense along her trip to King's Landing.

However, aside from the exciting prospect of two fan favorites finally sharing the screen together, it could also be the start of a potential marriage between a (bastard) Stark and a Targaryen. One of Daenerys' objectives in Westeros, aside from taking the Iron Throne from Cersei, is finding a suitable partner. Many fans are already shipping Jon and Dany — and frankly, he's probably the best bachelor for her in Westeros — but there's an important caveat: She's technically his aunt.

After the show officially confirmed the widely believed R+L=J theory, making Jon the bastard son of Lyanna Stark and Rhaegar Targaryen, it adds some incestuous intrigue to their potential pairing (though for the Targaryens, at least they have a history of incest on their side).

But in order to stop Cersei's reign, and subsequently help Daenerys ascend to the Iron Throne, a Stark-Targaryen alliance would make the most sense. As Nerdist explained back in July, a marriage between Jon and Daenerys would actually answer an ancient pact between the two houses that dates back to the Dance of the Dragons — a period of civil war for House Targaryen. The condition for the Stark support was that a Targaryen would marry a Stark; centuries later, that promise still has yet to be fulfilled.

Whether the Jon and Daenerys feminist (but incestuous!) power couple of our Westerosi dreams comes true remains to be seen. But at least one actor — Nathalie Emmanuel, who plays Missandei on the show — doesn't appreciate the leaked photos from the set:

Perhaps fans should be patient and ignore the #spoilsports.