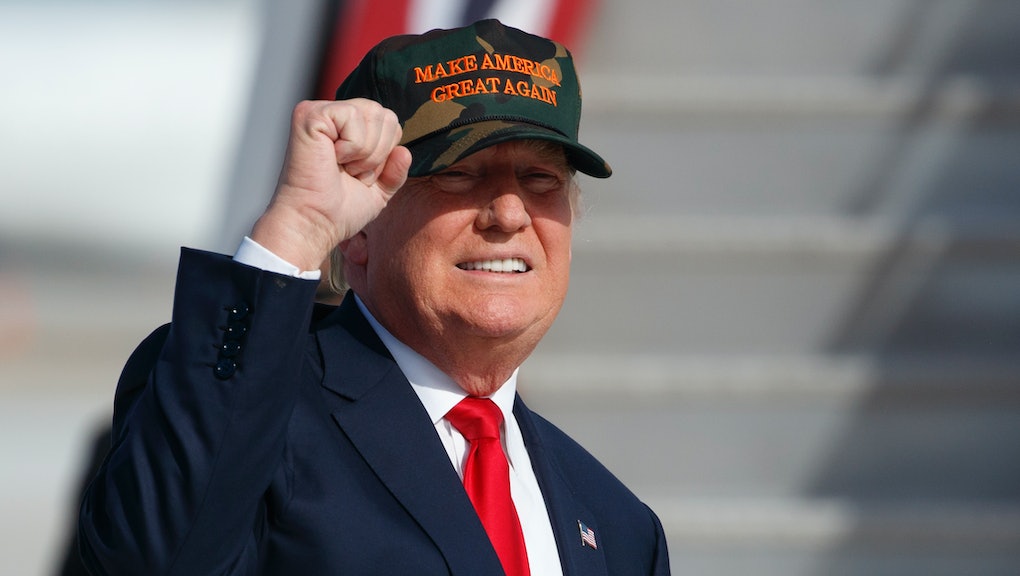 On Tuesday afternoon, at a rally in Sanford, Florida, Republican presidential nominee Donald Trump — who has used denigrating or condescending language about racial minorities throughout his campaign — referred to a sign held by a supporter conveniently positioned behind the podium saying "Blacks for Trump."

"I love the signs behind me," Trump said, according to Business Insider's Steve Kosach. "... blacks for Trump."

One oopsie: The woman directly behind Trump holding the sign was white.

Trump also turned to another woman holding an "LGBTQs for Trump" sign.

In fairness to Trump, there were actual black people present at the rally holding duplicates of the "Blacks for Trump" sign.

Unfortunately for Trump, as the Miami New Times recently reported, the man organizing the Florida-based #BlacksForTrump movement is known by the names "Maurice Woodside or Michael Symonette ... a former member of the murderous Yahweh ben Yahweh cult, which was led by the charismatic preacher Hulon Mitchell Jr., who was charged by the feds in 1990 with conspiracy in killings that included a gruesome beheading in the Everglades."

While Symonette was never found guilty of participation in the murders, he later "re-invented himself as Michael the Black Man, an anti-gay, anti-liberal preacher with a golden instinct for getting on TV at GOP events," according to the New Times.

The website he advertises on his signs and shirts, Gods2.com, redirects to a page claiming Democratic nominee Hillary Clinton will start World War III, is a member of the Illuminati, consorts with demons and accuses her of loyalty to racist groups like the Ku Klux Klan. It also makes passing references to "vampires and cannibals in American history".

In other words, not exactly a representative advocate for the black community. A UPI/CVoter tracking poll shows Trump may be trailing Clinton by a staggering 80%-plus margin nationally — consistent with earlier polls showing the Republican nominee in fourth place behind third-party candidates Gary Johnson and Jill Stein at a dismal two percent support among blacks.