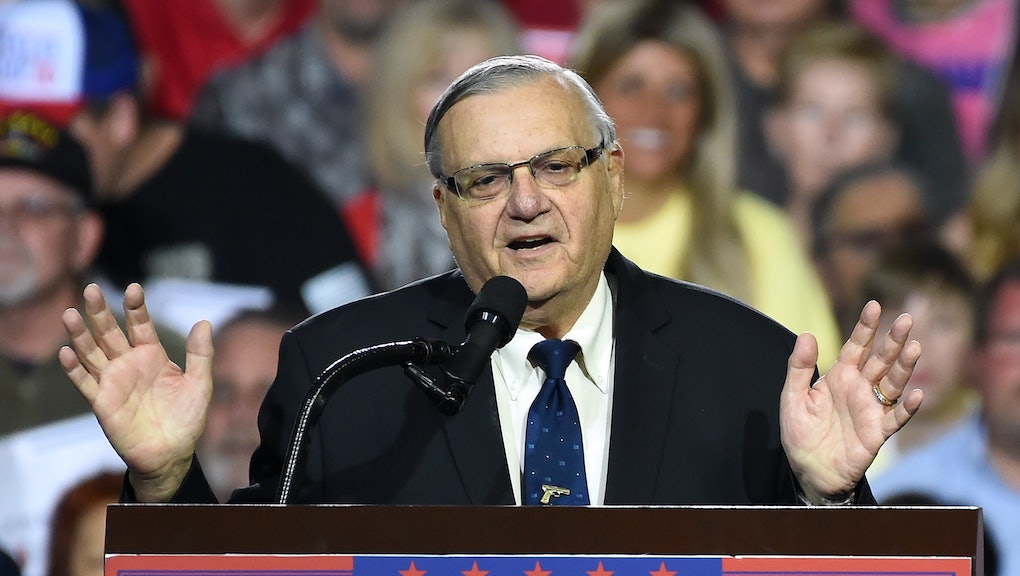 It's official: Maricopa County, Arizona Sheriff Joe Arpaio, one of the country's most outspoken anti-immigration activists and a hardline enforcer of Arizona state immigration law, will be facing federal charges related to his alleged abuse of power.

The Arizona Republic reported on Tuesday evening federal prosecutors have officially filed criminal contempt charges against Arpaio for failing to comply with federal court orders issued by U.S. District Court Judge G. Murray Snow, who is presiding over a long-running racial profiling case against Arpaio's department. According to the Republic, prosecutors allege Arpaio's deputies "continued to arrest and deliver undocumented immigrants to federal authorities when there were no state charges against them," even after Snow ordered Arpaio to cease the practice.

The racial profiling case, in which Arpaio's deputies stand accused of essentially terrorizing Maricopa County's Latino population in search of people potentially in violation of immigration law, is just one of many ways in which the sheriff has attracted criticism over the years. Under his tenure, the Maricopa County Sheriff's Office has opened a sweltering open-air prison for inmates, conducted immigration raids federal courts ruled as civil rights violations, and opened investigations into Arpaio's political opponents outside observers warned may have constituted a serious abuse of power.

While the sheriff bills himself as a thrifty, conservative budget-cutter, Arpaio's department has been forced to pay out tens of millions of dollars in settlements and judgements. In the past year, Arpaio has also emerged as a prominent backer for GOP presidential nominee Donald Trump, delivering a speech at the Republican National Convention in July.

If convicted, Arpaio could serve up to six months' jail time and lose his office.