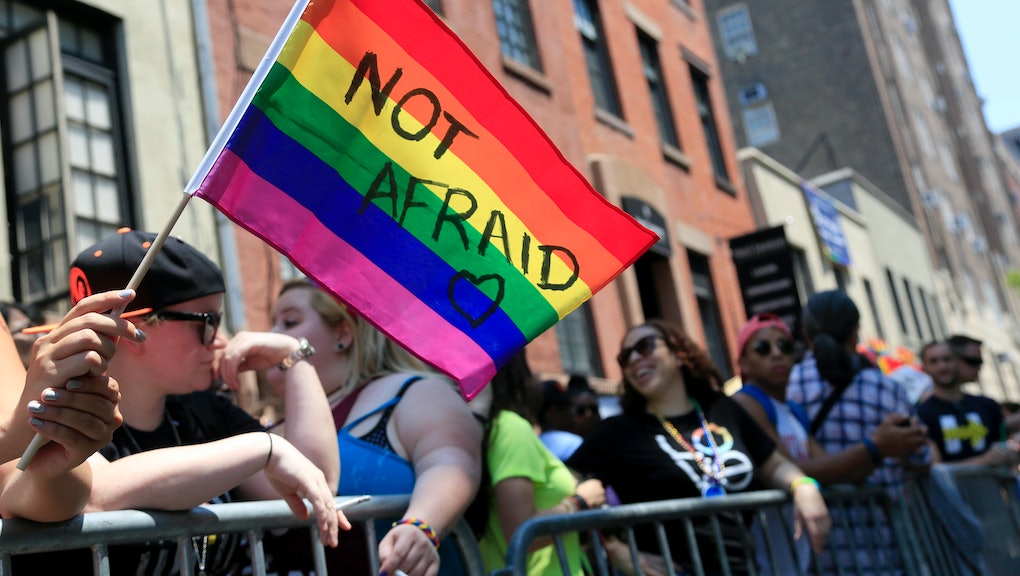 Everyone should officially add a "Q" to the end of LGBT, GLAAD says

The word "queer" has officially made it to the mainstream — according to GLAAD, at least. In the latest edition of its Media Reference Guide released Wednesday, the LGBTQ organization announced the preferred acronym is LGBTQ over LGBT.

This is the first year GLAAD has recommended media outlets include the Q for people who identify as queer, although the letter can also stand for "questioning." Many publications, including Mic, look to GLAAD as a resource when writing about sexual identity, meaning the Q in LGBTQ is getting a big boost in visibility.

Why the shift? According to GLAAD president and CEO Sarah Kate Ellis, the decision had a lot to do with the increasing numbers of young people who feel comfortable using queer as an identity.

"Today, more and more people, especially young people, are using the word 'queer' to describe themselves," Ellis said in an email. "This update to the GLAAD Media Reference Guide reflects the increasingly diverse ways LGBTQ people talk about their identities, and encourages media-makers to be inclusive of those identities in their work."

The definition of the term "queer" in GLAAD's newest reference guide acknowledges the role young people have played in bringing the word into the mainstream, and the importance of having a sexual identity category that can, for some people, feel less limiting than gay, lesbian or bisexual:

An adjective used by some people, particularly younger people, whose sexual orientation is not exclusively heterosexual (e.g. queer person, queer woman). Typically, for those who identify as queer, the terms lesbian, gay, and bisexual are perceived to be too limiting and/or fraught with cultural connotations they feel don't apply to them. Some people may use queer, or more commonly genderqueer, to describe their gender identity and/or gender expression (see non-binary and/or genderqueer below). Once considered a pejorative term, queer has been reclaimed by some LGBT people to describe themselves; however, it is not a universally accepted term even within the LGBT community. When Q is seen at the end of LGBT, it typically means queer and, less often, questioning.

GLAAD's definition also acknowledges the history of the word queer, which, for much of the 20th century, was an insult, as imbued with anti-gay hate as calling someone a dyke or a fairy.

Activists helped reclaim the word; as Autostraddle reported in a history of the word "queer," one of the first groups to take it back from bigots was Queer Nation, which emerged as in the late 1980s as a splinter group from other LGBTQ rights groups like ACT-UP and Gay Men's Health Crisis. Now, the word feels ubiquitous in both academia and pop culture.

But for some, the term still carries the pain of a word that was hurled as an insult for years. When the Huffington Post changed the name of its LGBTQ-focused section from "Gay Voices" to "Queer Voices" earlier this year, contributor James Peron protested, writing in his final piece for the section, "I'd be quite happy with Rainbow Voices. I doubt many of us had traumatic experiences with rainbows. But, many people, myself included, had very painful experiences with being labeled 'queer.' I find the term as insulting as 'nigger,' or 'kike.' I don't even like using those words to express why I hate being labeled queer — regardless of who does it."

GLAAD's Ellis acknowledged the word's history. "For some, 'queer' is a word that still evokes painful memories or associations, and we note in the GLAAD Media Reference Guide that it is not a universally accepted term even in the LGBTQ community," Ellis wrote. "It should never be used to describe a person unless they use it to describe themselves. For others, 'queer' is an empowering word that, for them, most accurately describes their authentic sense of self."

For Ellis, it seems, the benefits of giving "queer" a place in the acronym outweigh any harm that may be done. As she said Wednesday, "Visibility is critical to accelerating acceptance."