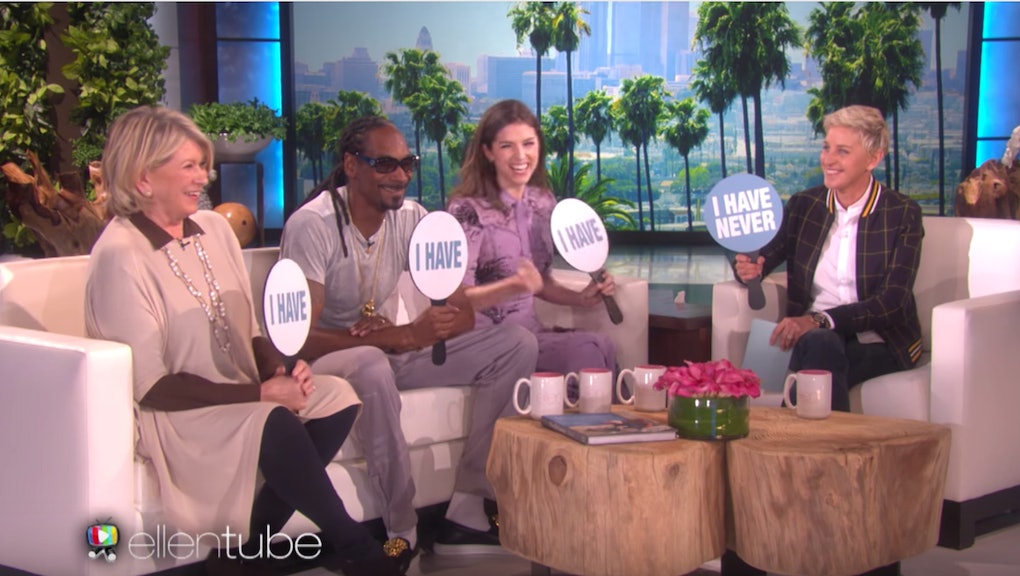 Martha Stewart's been to prison, roasted Justin Bieber and effortlessly shaded a member of Kim Kardashian West's entourage, but she still finds new ways to surprise us. Did you know she has sexted?

That revelation came when Stewart, Snoop Dogg and Anna Kendrick, of all people, stopped by Ellen DeGeneres' show to play a game of Never Have I Ever. They were each given a sign that had "I have" and "I have not" on either side, and they'd raise it for each statement, along with the host.

The first question, about sexting, prompted "I have" from all the guests, but it was Stewart's admission that got the biggest reaction from the guests — especially Kendrick.

"Wow, Martha, you've sexted?" a bewildered DeGeneres asked. "To who? Is it someone current or is this a while ago?"

"It doesn't say 'none of your business' here," Stewart responded, referencing the sign.

Later on, DeGeneres asked if any of the guests had visited a nude beach, to which Snoop Dogg and Stewart admitted to doing so. Again, Kendrick was perplexed by Stewart's answer.

Watch the full game of Never Have I Ever from The Ellen DeGeneres Show below.