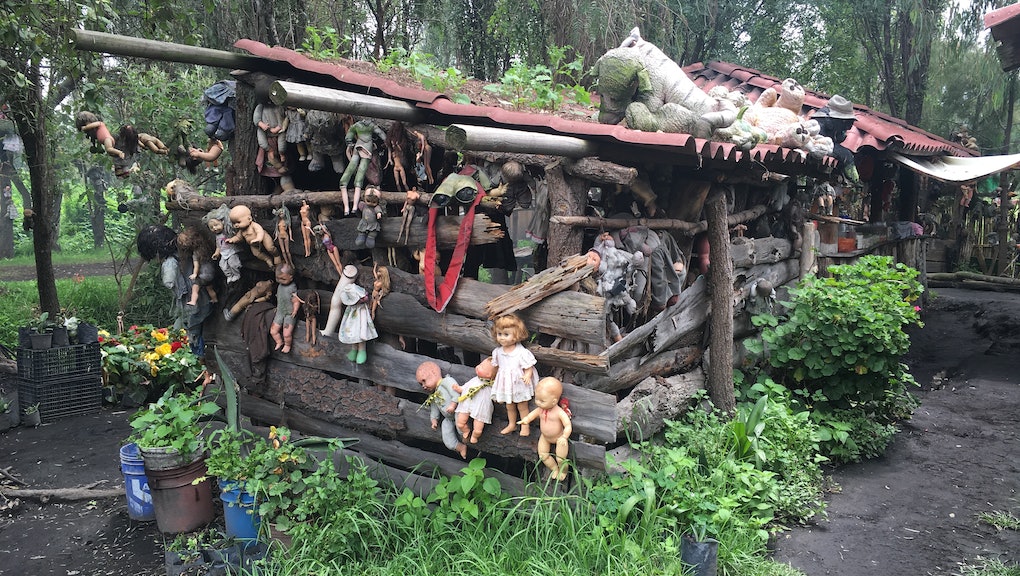 We're all aware of today's hugely popular Halloween traditions in the US and Canada — with supermarkets brimming with disguises and candy, they're hard to ignore. Many already know that Irish settlers originally brought the tradition over with the pagan festival of Samhain, which marked the end of the summer harvest and the beginning of winter. The belief was that, during this changeover period, the line between the worlds of living and dead was at its weakest, making it the best time to commemorate the deceased. In the 8th century, noting the popularity of pagan festivals happening around Oct. 31, the Catholic church named Nov. 1 as All Saints' Day to honor its fallen saints and martyrs.

The merging of these two spiritual observances gave rise to the western idea of Halloween that we know today. But around the world, people celebrate fall in ways most in the west have never heard of. Travelers setting out for places beyond the United States as summer wanes should keep an eye out for some of the more intriguing ways people celebrate the harvest season across the globe.

Instead of the typical western Halloween, the Chinese celebrate Yu Lan Jie, or the Hungry Ghost Festival, which falls on the 15th day of the seventh lunar month each year (usually July or August on the Western calendar). Owing to origins in Taoism and Buddhism, the Chinese believe that both evil spirits and the spirits of their ancestors roam the earth throughout the month. After a few weeks of roaming, it's assumed the spirits get pretty hungry, so people leave out treats to feed their souls. Variations on Yu Lan Jie happen not only in mainland China, but also in Hong Kong, Taiwan, Singapore and Malaysia.

The festival begins when people start to burn fake money and other paper goods to help the spirits along the way in their month of freedom. They also put out photographs of their ancestors to commemorate them, burn incense and put on special plays to entertain the ghosts while they explore the living world. In Singapore, auspicious items are sold during a festival auction dinner, supposedly to bring luck to those who buy them. Proceeds from this dinner go to buying offerings to help those spirits who have no one left to look after them. At the end of the month, Taoist monks chant to help send the ghosts away, and paper lanterns float down rivers to guide the spirits back to the underworld.

Of course, with spirits wandering the earth for an entire month, there is room for quite a bit of spooky mischief. Observers of Yu Lan Jie advise against a number of activities during this time: Feel like a swim? Be careful, because those who died drowning might try to lead you to the same fate! Need to dry your clothes? Don't leave them outside, or a ghost might try them on and leave you their negative energy. If you're traveling or doing business in an observant area during this time, it would be worth a read through this list of what not to do.

Nepal: Gaijatra, the Festival of Cows

Nepal's Gaijatra, the Festival of Cows, can fall in either August or September. It's a day given over for people to remember those who have died in the year. The story goes that a medieval king of Kathmandu named Pratap Malla organized a parade to cheer up his queen after their young son's death. Following the Nepali tradition of leading a cow through the streets to commemorate a death in one's family, the people of Kathmandu led cows in a parade, put on cow costumes themselves and performed humorous acts and dances in an attempt to raise their queen's spirits.

Today, Gai Jatra is still considered one of the most important festivals of Nepal. In oppressive times, it has also been used as a day for political satire, where people can freely express their true opinions on the leadership of the day. The symbol of the cow is also particularly important in Hinduism, where it is a holy animal, and the Hindus believe that the cows will also help lead the dead's journeys to heaven. In Hinduism, "whatever a man does in his life is a preparation leading to a good life after death".

Perhaps equally as famous as traditional Halloween in the US, Día de los Muertos, or Day of the Dead, is celebrated across Spain, Mexico and other parts of Latin America in commemoration of lost ancestors. This festival, celebrated in the first and second days of November, was added to the UNESCO Intangible Cultural Heritage Lists in 2008 because of its cultural significance, particularly in Mexico. The startling skull-like portraits painted on faces are among the tradition's most famous symbols, and macabre rituals and ceremonies are performed as people parade and offer things up to their deceased.

One creepy Halloween destination in Mexico that is worth a visit is the Isla de las Muñecas, or Island of the Dolls, in Xochimilco. Legend has it that the caretaker of the island was once unable to save a girl from drowning, and after her death he hung up her toy doll in a tree to protect her spirit. After a while, he felt he was haunted by her ghost, and began hanging up even more dolls to pay his respects. Eventually, it is said that he realized that the dolls themselves were inhabited by spirits of the deceased. After over 50 years of hanging these dolls around the island, the caretaker himself drowned and joined the other spirits of the island.

Whether you believe in legends or not, it can't be denied this is a pretty spooky spot to visit in the day, let alone at night during the Halloween season.

Unlike the western parts of the world that limit Halloween celebrations to Oct. 31, Austrians commemorate the dead through a whole week of Halloween, called Seleenwoche, or All Souls' Week. They believe, much like with Samhain, that there are strong cosmic energies during this time allowing for a bridge between the worlds of the living and the dead. To recognize this, they place offerings of food out for their visiting spirits, and will even leave lamps on at home to guide the spirits along. People may gather as families in graveyards and bring lanterns to light the way for the dead more directly, and often wreaths and other decorations are left by graves.

Germany and the Czech Republic: knives and chairs for the dead

While these two have fairly traditional Halloween customs, they each do something a little extra to make this night slightly unusual. Some Germans observe a tradition of hiding their knives on Halloween to ensure there are no conflicts with any evil spirits, while the Czechs may place an empty chair in their living room for each member of the family who has died. Known as Dušicky in Czech, All Souls Day falls on Nov. 2 and is more of a quiet time for commemoration of the deceased than it is a candy-fueled celebration.

The Japanese celebrate Obon, a summer dance festival that usually falls in July or August, and honor their ancestors with a folk dance style called Bon Odori. During this time, it's believed that the deceased can return to the world of the living to see their loved ones. It is also a time of prayer to help guide the spirits into enlightenment without suffering.

People dress in traditional kimonos and dance to welcome and guide spirits of their deceased. The movements of some of the dances have been passed down from generations to mimic traditional tasks such as harvesting rice or scooping mud. This means that the steps are easy to remember, which allows everyone to take part. Dances can be both for entertainment and more ritualistic, such as with the Shiraishi Odori dance, which commemorates fallen warriors.

On the first day of the festival, known as mukaebon, lanterns are placed outside homes to help guide spirits back, and people traditionally clean their houses to prepare for the dead. Throughout this time, graves are often visited and cleaned, and offerings from small snacks to large meals can be provided for the spirits, as if the ancestors were still amongst the living. This tradition of sharing food with the dead is known as ozen, and it is especially important not just during this festival but also at funerals. Food is also used to represent spirit animals that help ferry the dead between realms, most notably cucumber and eggplant. Small wooden sticks can be added to cucumbers to symbolize horses that will bring the dead over quickly, and sticks are added to eggplants to signify cows, which will take them back to the land of the dead slowly.

The Hungry Ghosts return here, however in a slightly different celebration. In Cambodia, Pchum Ben, or Ancestors Day, is celebrated typically in September and is a time when people collect and give food to monks as well as make offerings to their ancestors at pagodas. This 15-day festival is extremely important in the Khmer religious tradition, and allows Cambodians time to pay their respects to ancestors of up to seven generations.

In this festival, even souls who are thought to be in hell are allowed to have a break and visit their descendants for respite. There are supposedly four different types of ghost that can return, though only one can receive food through the monks — if their sins are sufficiently reduced in the afterlife. Small balls of rice called bay ben are offered up at dawn, when it's thought these sinners are allowed to eat.

Pchum Ben dates back to the Khmer empire between the ninth and 15th centuries, when many people believed in animism, or the belief that natural objects, plants and the universe itself possess souls. When Buddhism became the main religion, this tradition continued, as it followed the Buddhist principles of respect for nature and ancestors. Other practices during the modern-day festival include playing traditional music, reading Buddhist scriptures and donating gifts like candles to monks.

But if you're staying home...

Those who aren't up for an international adventure during the Halloween season can still add a twist to the trick-or-treat routine. Try making some Irish barnbrack fruitcake or colcannon to bring a taste of real tradition to your home. Watch out when following these recipes, though, as often items are to be hidden in the barnbrack to predict if your future holds fortune, love or ruin. Depending on what you find, you may get more than you bargained for.