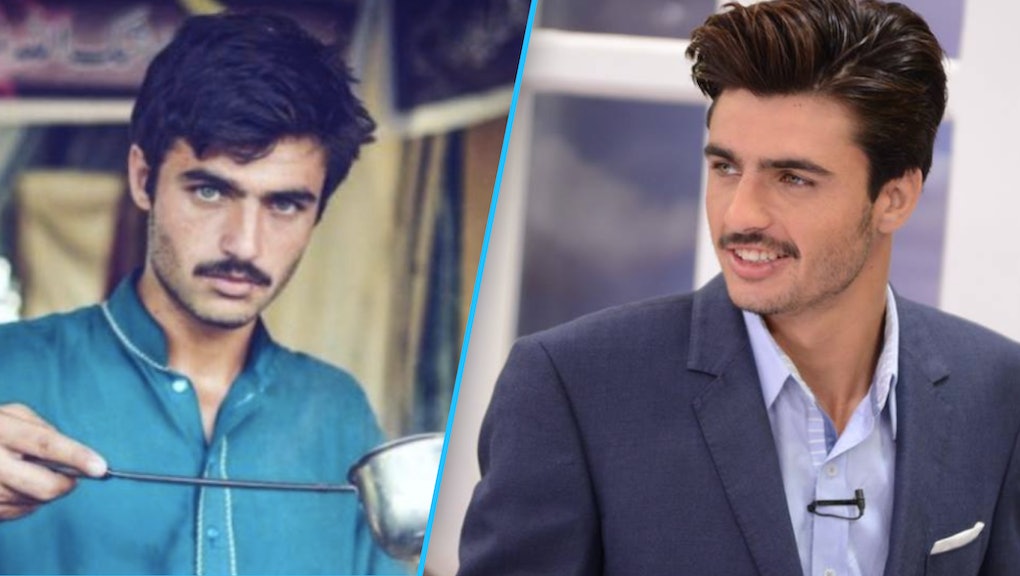 Last week, photographer Jiah Ali snapped a now-viral photograph of a chaiwala — or tea seller — in Islamabad, Pakistan. The image was singular for one reason: its subject, with his piercing green eyes and pronounced bone structure, was conventionally attractive.

Western media quickly picked up the photo, and it has since gone viral. Outlets like BuzzFeed, the Huffington Post and the BBC all swooned over the man, who has since been identified as 18-year-old Arshad Khan, marveling at his "stunning" features.

But in order to identify the problem with all the adoration, we need to first unpack why everyone thinks his looks are so remarkable in the first place.

Khan looks different — but not too different.

Khan's light skin and eyes are both trademark characteristics of Pashtuns, the tribal residents of northwest Pakistan and southern Afghanistan. For Westerners, his physical traits make for a stunning combination: just "other" enough to be completely foreign, but also familiar in the ways in which they overlap with traditionally "European" features.

Would the same photo of Khan have gone viral if he had darker eyes or skin? It's impossible to know for sure, but it's certainly tough to recall any other instances of men with more commonly recognizable South Asian features going viral in the recent past.

Khan was then given a makeover, and things got even worse.

Of course, the fetishization of Khan's light features isn't where the story ends. As with any viral sensation worth its reblogs, the life cycle of the photograph wasn't complete until the media completely jumped the shark. In Khan's case, that happened on Tuesday, when he appeared on Pakistani talk show Good Morning Pakistan.

Producers had enlisted a team of stylists to give Khan a makeover. In the "before" portion of the show, he appeared, as Buzzfeed reports, "100% himself."

In the "after" portion of the makeover, a team of groomers unveiled the "new and improved" Khan, which included a fancy new suit and cleaned-up eyebrows. Strangely, he even seemed to be sporting slightly lighter hair.

The issue, obviously, is that the impulse to help Khan achieve maximum attractiveness involves cultivating even more Western ideals of beauty. Gone is the traditional and unassuming Pashtun attire in which he arrived, and in its place is a suit that makes him look like he just stepped out of a Brooks Brothers catalog. The sanitized facial hair and dyed locks are further evidence that when it comes to beauty, we're employing a fairly simple formula: Light is good, dark is bad.

We see evidence of this Euro-centric beauty standard and influence in Desi culture writ large. Much has been written, for example, about the Westernization of Bollywood aesthetic, from fair-skinned and green-eyed actor Hrithik Roshan to the tuxedo-clad Shahrukh Khan.

In all likelihood, the clock has nearly run out on the chaiwala's 15 minutes of fame. But while we have a few seconds left, it's important to take a step back and wonder what makes a face beautiful to us in the first place — and consider that the conclusion that we come to might be an ugly one.