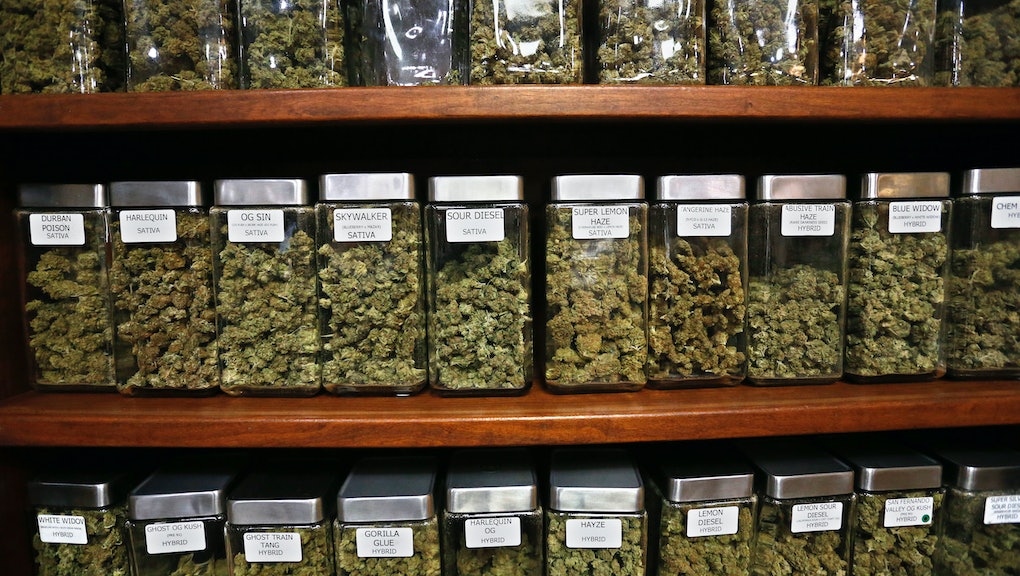 Election Day could bring legal weed in five more states, doubling the places in the United States where Americans can recreationally use marijuana. A majority of Americans believe cannabis should be legalized for recreational use. But until now, the presidential candidate whom marijuana users support was unclear.

Clinton was always likely to win California — no Democrat has lost there since 1988. A recent poll there found as high as 56% of voters support Clinton. In the community of medical marijuana users, the Eaze survey says her support rises to 81%.

Such support was not guaranteed. Clinton and Trump have similar positions in their support of the expansion of medical marijuana programs. And unlike her primary opponent Bernie Sanders, Clinton does not believe the federal government should remove marijuana from its list of controlled substances. Clinton says cannabis should be moved from a Schedule I ("no currently accepted medical use and a high potential for abuse") to a Schedule II ("dangerous" with "a high potential for abuse") drug, which would put it in a class with cocaine and methamphetamine.

On Nov. 8, voters in California, along with Arizona, Maine, Massachusetts and Nevada, will decide whether to legalize recreational marijuana use. Half of states already allow medical cannabis. California has the country's largest marijuana industry. And Eaze's survey found 85% of medical marijuana users are registered to vote, higher than 72% among all Californians.

The Eaze survey of 5,000 medical marijuana users found Clinton and Trump supporters in California broadly agree cannabis should be legalized; 97% of registered voters in the state who use cannabis believed it should be legalized for recreational use at the federal level, Eaze found.

97% of registered voters in California who use medical cannabis believe marijuana should be legalized.

Conservatives and liberals surveyed support legalization because it disrupts drug cartels and supports personal freedom, Eaze CEO Keith McCarty said to Mic. Regardless of party, the uniting reason for support of legalization is the potential medical benefits of marijuana. "The thing that trumps it all is health," McCarty said.

Eaze also found Trump supporters use marijuana on a daily basis more than Clinton supporters. However, Clinton voters have been using marijuana longer than their Trump counterparts. The survey found the preferred reason to use marijuana was to treat mental health ailments such as PTSD, anxiety and depression.

McCarty said the Eaze survey and other polling shows the level of interest around marijuana as an election issue continues to grow. And because the number of Americans with access to marijuana for medical and recreational use will also continue to grow, the next president must pay attention to how existing users feel, McCarty said.

"Cannabis is the fastest growing industry in the world," McCarty said. "And the presidential candidate should absolutely be looking at this. Voters already are."