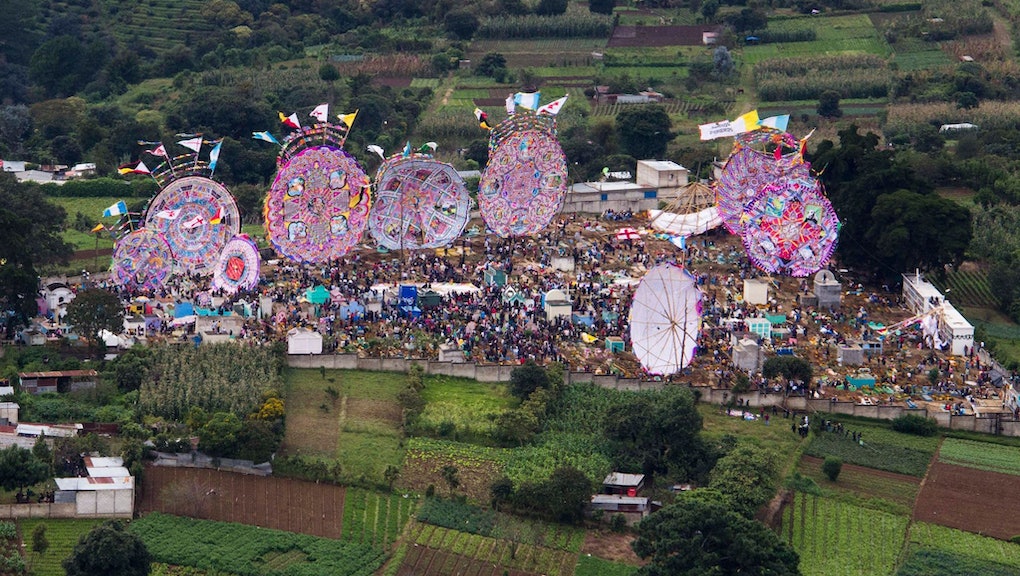 In Guatemalan culture, the Día de los Muertos — or Day of the Dead — is a time when the worlds of the living and the dead are believed to mesh together and spirits return to Earth from heaven. The celebration, which begins November 1, is also known as All Saints' Day, or Día de Todos los Santos.

To celebrate Día de los Muertos, Guatemalans across the country pay visits to cemeteries, prepare a special dish called fiambre and, among other traditions, fly kites.

The Kite Festivals of Santiago and Sumpango — both in the Sacatepéquez region — are about honoring the dead and communicating with them, but locals also compete to see who has the most beautiful kite and which of them can stay flying the longest. There are prizes for best design, but for the winners, the cheers and admiration of the crowd are rewarding enough.

These photos were taken in recent years in Sumpango, where the Kite Festival has been celebrated for nearly 40 years. According to Julio Asturias from the Committee of Sumpango, 36 groups are already onboard to fly their kites at this year's festival.

Known as "barilletes gigantes" in Spanish, the giant kites of Santiago and Sumpango are masterpieces that take great skill and patience to create.

Around two weeks before the first of November, preparations for the festivals begin. For young people, that means gathering to start making the huge kites — an age-old practice with roots in Ancient Mayan culture.

A standard barillete gigante is made of cloth and paper tied to a bamboo frame, and features a colorful design — usually with a religious or folkloric theme. The kites' diameters generally range between 24 and 30 meters, with some as big as 36 meters.

When the kites are finally finished, they're transported to the festival sites and hoisted upward toward heaven, in memory of deceased relatives. In Santiago and Sumpango, the festivals take place near cemeteries.

Due to their massive size, the barilletes gigantes don't fly. Instead, the vibrant masterpieces stand upright on the ground.

On the sidelines, revelers make smaller kites for flying purposes.