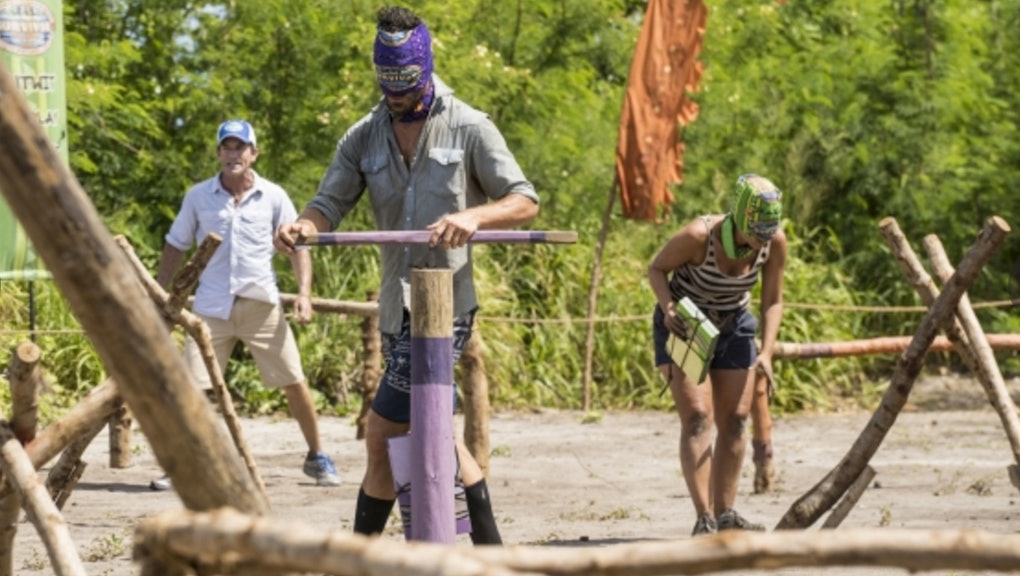 Welcome back to Survivor, where, as of last episode, Millennials and Gen Xers are living side by side on three newly formed tribes. Last week, Chris Hammons, David Wright, Zeke Smith and Michelle Shubert nobly looked past their generational divides and teamed up to blindside Ciandre "CeCe" Taylor. Will the multigenerational castaways continue to get along despite their wildly different attitudes toward texting? Let's find out!

Let's get started. Fresh off their cleanly executed blindside, Chris and David are happy as clams. Generational divides? Who needs 'em!

But while the former Gen Xers celebrate their newfound Millennial friends, Zeke is thinking a little more strategically. "Tribal was such a delight because those silly Gen Xers sent home one of their own, on the only tribe where they had the numbers," he tells the camera.

Over on the green team, everyone's hungry and tired. Justin "Jay" Starrett — just the latest player to yank on my heartstrings with the force of a thousand suns — tearfully explains he wants to take care of his tribe, just like he takes care of his mother and sister back home.

While out searching for coconuts with Will Wahl, Jay stumbles upon a hidden Immunity Idol. The two rejoice — until Michaela Bradshaw stumbles upon them. Michaela isn't going to tell anybody about the idol, she says to the camera, not as long as she doesn't feel threatened. Otherwise, she says, "I'm snitching."

Next up is the Reward Challenge, where the tribes compete for tasty-looking baked goods. In this challenge, one member of each tribe directs their blindfolded teammates through a series of obstacles to collect puzzle pieces, which they then (still blindfolded) have to assemble.

Meanwhile, on the sidelines, Hannah Shapiro says she's feeling faint, so host Jeff Probst sends her to sit in the shade. "My whole face is tingling," she says. It turns out, Hannah — who experiences anxiety — is having a panic attack. The show's medical team helps her regulate her breathing.

On the playing field, the orange team comes in first and the green team comes in second. Cookies and brownies for all! Except for the purple team, that is.

Back at the purple team's camp, Figgy and Taylor are kissing and licking each other's faces in "secret." How can we expect two Millennials to keep a love so pure and passionate under wraps, I ask you? Adam Klein, the couple's one fellow Millennial, seems appropriately disgusted.

Like on last week's episode, Taylor wants to come clean about their relationship to Jessica Lewis and Ken, their Gen X teammates. Finally, he manages to persuade Figgy: "We're a power couple and there's no reason to hide it," Taylor assures her.

It turns out, all that kissing and face-licking wasn't so "secret" after all. When Figgy opens up to Jessica and Ken, the Gen Xers tell her they've known all along. Figgy is shocked — but honestly, how could anyone not know? Every bird, fish and grain of sand within a 100-mile radius of the Survivor set knows Taylor and Figgy are dating.

"That little couple of Taylor and Figgy aren't as cool as they think they are," Ken tells the camera — and dammit, he's going to make sure he's not going home.

Now, for the Immunity Challenge. The three tribes have to complete a series of water-based obstacles to collect bags of coconuts. From those bags they most procure three balls, which they then have to navigate through a table maze.

Michaela and Hannah butt heads while partnered on the green team's table maze, but still, they table-maze their way to victory! The orange team takes second place, meaning the purple team — home to Fiji's no-longer-secret power couple — is headed to Tribal Council.

Taylor, Figgy and Adam discuss taking out Ken, but Taylor and Figgy wonder if they can trust Adam — and rightfully so. The clear third wheel of the tribe's three Millennials, Adam is also being courted by Jessica and Ken to vote out one of the lovebirds.

In other words, only Adam's vote matters tonight.

At Tribal Council, Figgy and Taylor seem confident the Millennials are sticking together.

Then, things take a weird turn. Now that Figgy and Taylor's love is out in the open, Jeff (an ordained minister, apparently) asks if he should marry them right on the spot. Please no. Please. No. Nobody asked for this. Can we get to voting, already?

They say all good things must come to an end. Thankfully, bad things — like Figgy and Taylor's aggressive PDA — come to an end, too. Betraying his fellow Millennials, Adam votes with Jessica and Ken against Figgy. Bye, Figgy — and sorry, Taylor.